After seeing countless stories and statistics on the Canadian housing market I did some research to check things out for myself. The numbers I found are staggering. They make the U.S. housing bubble that led up to the financial crisis look like an amateur. I don’t throw around the word ‘bubble’ loosely but the Canadian housing numbers are insane.

After writing this piece for Bloomberg I received by far the biggest reader response for anything I’ve ever written. I heard some good arguments as to why I am wrong as well as some not-so-good ones. There are always caveats to everything and I heard many about this piece. Some are true while others are a stretch. I was told I’m both right on the money and an idiot for calling this a bubble. Time will tell, I guess…

Canadian home sales fell the most in five years last month. That didn’t stop an increase in prices, which were up 18 percent nationwide from a year earlier. When you consider that most houses are leveraged assets, this represents huge gains for homeowners.

While leverage can help boost performance on the way up, it becomes very dangerous on the way down. Leverage can turn even the best investments into poor ones when things go wrong, as losses are amplified. Equity can get wiped out pretty quickly on an overleveraged asset.

Canadian real estate has been on fire for years. The housing price data there has made the U.S. real estate market during the boom of the mid-2000s look mild.

The Federal Reserve Bank of Dallas puts out a global housing price index for more than 20 countries every quarter. Using this data, I looked at the real house price index data for Canada and compared it with the same data in the U.S. going back to 1975. 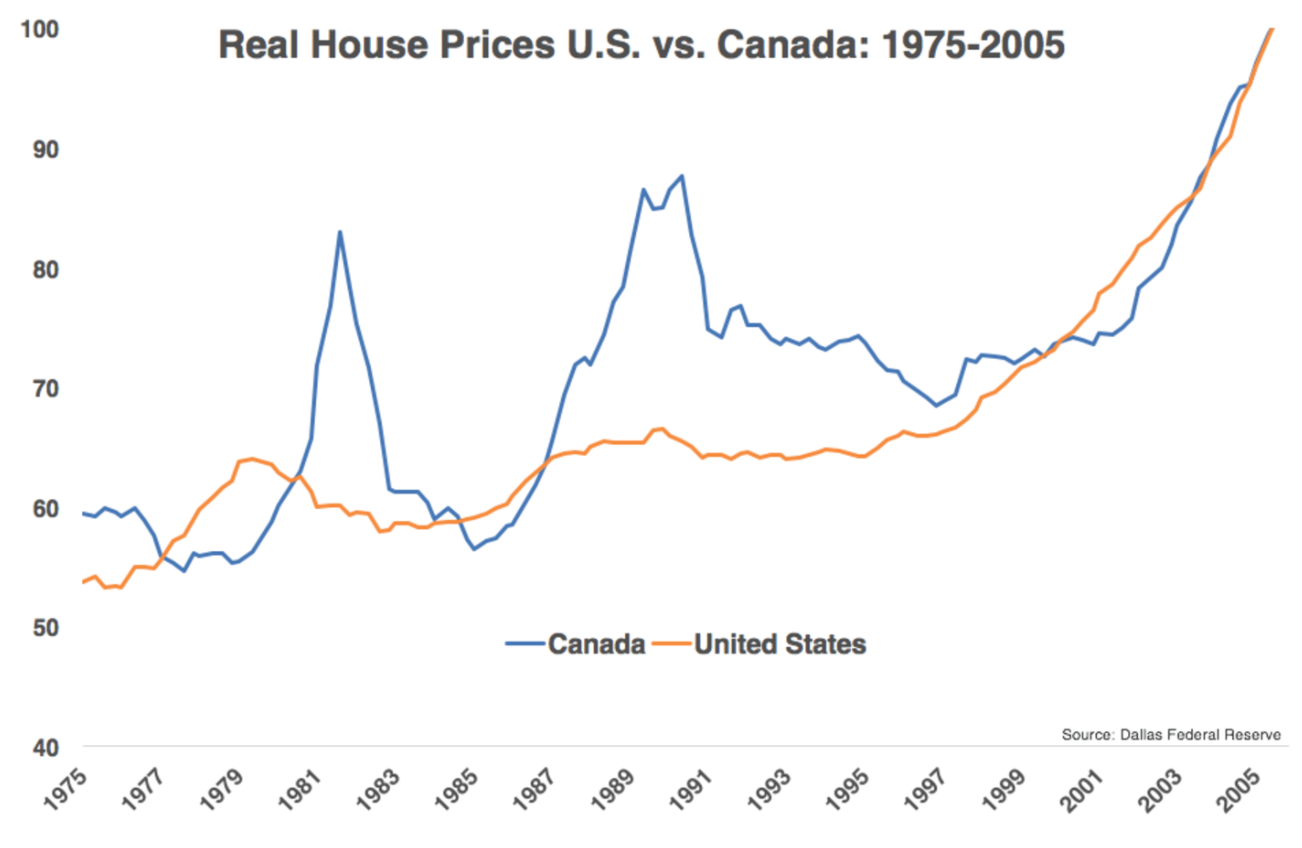 Although there were some divergences in the early and late 1980s, both housing markets essentially ended up in the same place after 30 years. Now let’s add in the most recent data to see how things have unfolded since: 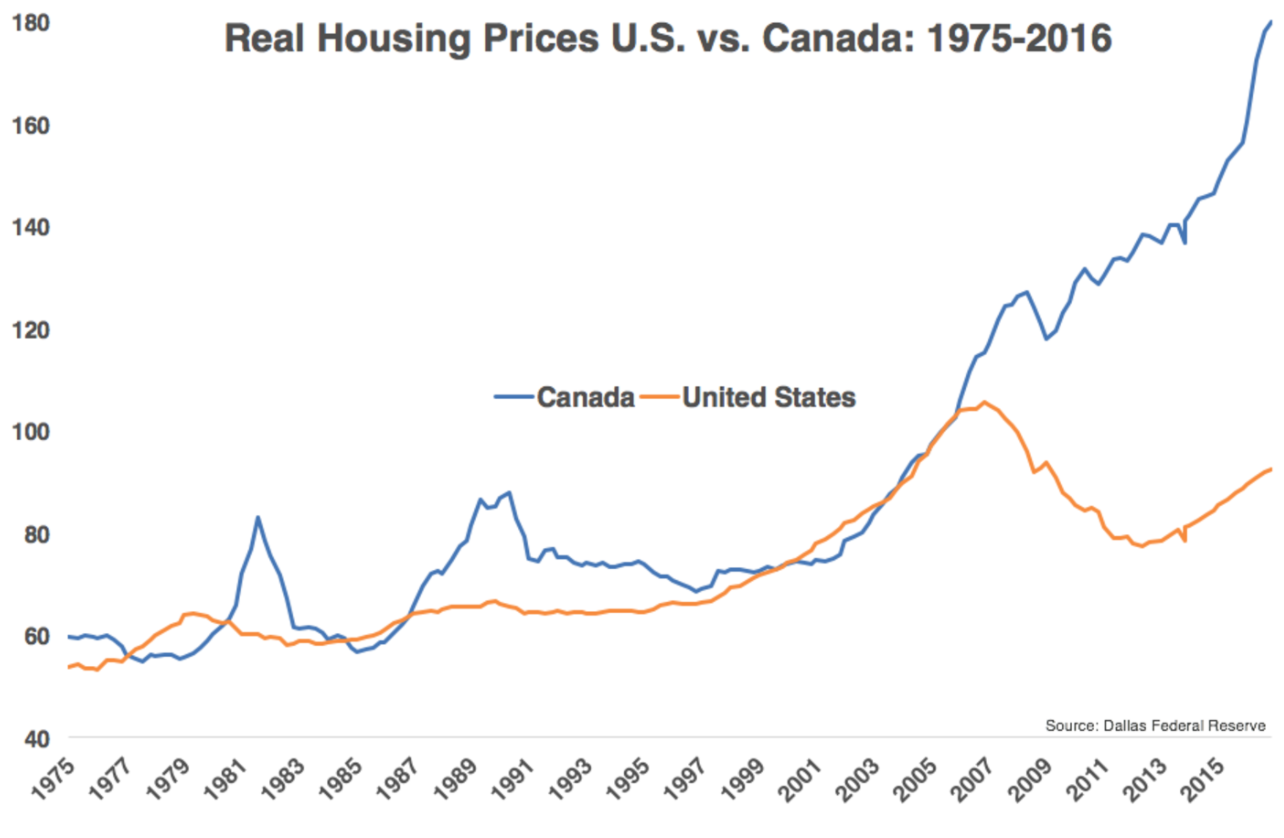 An enormous divergence occurred in 2006, when U.S. housing prices really began to soften, while Canadian price barely skipped a beat. This makes any differences in the past look like blips. The rise in Canadian real estate prices has been relentless.

From the 2006 peak, it took until late 2012 for real estate in the U.S. to bottom. We’ve since witnessed a 19 percent recovery from what was a 27 percent decline nationwide, on average. While the U.S. real estate downturn lasted almost six years, Canada’s housing market experienced just a 7 percent drawdown that lasted less than a year. And house prices in Canada reclaimed those losses in about a year and a half. Canadian housing has also outpaced its neighbors to the south since the 2012 bottom in U.S. real estate, with a 30 percent gain in that time.

To recap: On a real basis, Canadian housing prices experienced a much smaller, shorter decrease in prices during the financial crisis and a much larger, longer increase in prices during the recovery. When you couple this unfathomable rise in housing prices with near-record high household debt-to-income ratios, the Canadian housing bubble starts to look scary should the tide turn.

The reason homeowners in Canada should be worried is because housing is typically not a great long-term investment. Housing expert and historian Robert Shiller explains:

Here is a harsh truth about homeownership: Over the long haul, it’s hard for homes to compete with the stock market in real appreciation. That’s because companies whose shares are traded on a stock exchange retain a good share of their earnings to plow back into the business. The business should grow and its real stock price should also grow through time — unless the company makes poor decisions, as some certainly do.

By contrast, real home prices should decline with time, except to the extent that households shell out some money and plow back some of their incomes into maintenance and improvements, because homes wear out and go out of style.

The problem is that the home-buying experience is fraught with emotion. People rarely think about the characteristics of real estate as an investment when putting down roots and making the biggest purchase of their life. Once the herd mentality sets in these things take on a life of their own. In downtown Toronto, the average sale price of a detached home this spring was $1.2 million.

No one knows when insanity like this will come to an end. Bubbles are like an avalanche. The longer they build up, the worse they will be when they eventually destabilize.

The same is true of financial markets. No one really knows when or why bubbles come to an end, but eventually people come to their senses and the music stops. U.S. homeowners understand all too well what can happen to the economy when the housing market destabilizes. The timing is impossible to predict, but Canadians should be on avalanche alert.