The technology bubble during the late-1990s will likely go down as one of the most difficult market environments ever for fundamental investors. Growth strategies absolutely crushed value strategies and anything invested outside of technology or internet companies appeared foolish.

Warren Buffett’s Berkshire Hathaway stock was down nearly 20% in 1999 while the Nasdaq zoomed higher by nearly 90%. 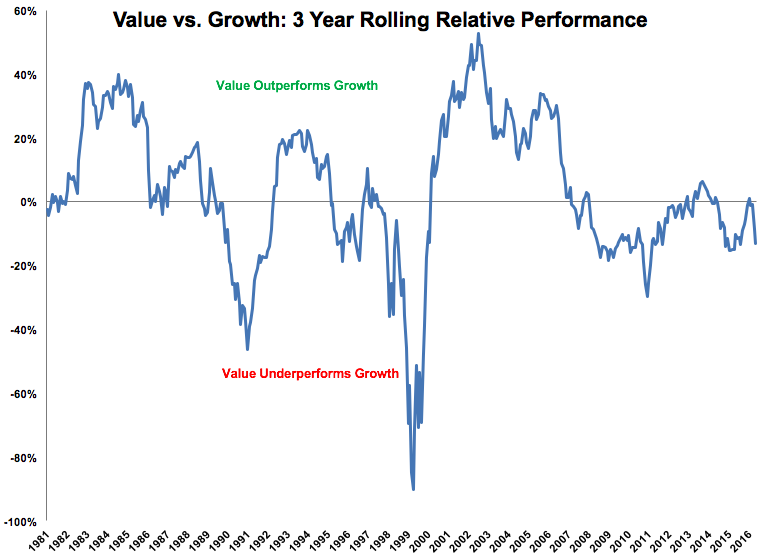 Value underperformed growth by almost 100% at the height of the tech bubble over a 3-year period. From that point on you can see the massive mean reversion kick in as value went on to dominate growth in the early-2000s.

I’m guessing very few value investors made it through this period without capitulating and investing in high-flying growth stocks. It would have felt irresponsible not to invest in tech at that time. But there is one organization who sat through the value debacle of the late-1990s and lived to tell about it.

Ted Seides recently sat down with legendary investor and author Charley Ellis to talk about his 16 years on the Yale Endowment Committee. Seides began his career working for David Swensen on Yale’s investment staff while Ellis was at one time the Chair of the Investment Committee so both had interesting perspectives on one of the greatest institutional funds of all-time.

Seides told the story about how Yale’s U.S. stocks were mostly positioned in value strategies in the late-1990s. From 1994-1999 Yale’s U.S. equity managers underperformed the market by 8% per year. That’s a massive amount of underperformance for a sustained period of time.

But not a single manager was fired. Swensen kept his role as CIO. The board didn’t push for changes. And the patience eventually paid off.

The eventual value snapback rally looks obvious in hindsight but looking at historical data and actually living through this type of underperformance are two completely different animals. When you’re running real money for other people it becomes nearly impossible to have the conviction to sit tight and stick to your knitting.

Time slows down when you underperform. Your resilience gets tested. People lose faith in your abilities. The amount of discipline needed to survive this level of underperformance is immense.

What does it take for an investor or board to sit still through an incredible amount of underperformance?

Here’s what Ellis — who was there at the time — had to say:

First, the investment committee was very carefully chosen, to be people who, number one, play well with others. Key characteristic – they listened well. Not for their opening, but for an understanding of the person’s real point. That’s so valuable.

The second thing is the depth of homework you’re required to do — I found out when I was on that committee I had to set aside an entire day, and I don’t mean a nine-to-five day, I mean from eight in the morning until eight at night or nine at night studying the documents so that I would be adequately prepared so I wouldn’t embarrass myself when I went in the meeting.

Ellis also touched on the importance of education and transparency in the process:

Once a year there’s a bring every possible question, complaint, doubt, skepticism, wonderment, whatever you’ve got in the way of any question, bring it to us a month or more before the meeting because we want to completely examine everything to our satisfaction and to yours, on every question that’s raised. Because once a year we have a soup-to-nuts, tear it all apart, look at every single assumption, does it all really, really make sense exactly the way it is or should we make some minor or mid-sized or even large changes.

Investors are easily swayed into trying to emulate their heroes in the investment world. Everyone has a favorite investor, capital allocator, venture capitalist or hedge fund manager they look up to. But very few of the emulators ever put in the time to understand how to earn outsized returns in the markets the way Swensen and his team at Yale have.

Very few investment organizations have the resources, connections or investment skills that Yale has. However, the most important attribute exhibited here is available to investors of all shapes and sizes — patience.

The entire conversation between Ted and Charley is worth a listen:
Charley Ellis – Multiple Ways to Win (Capital Allocators Podcast)