Daniel Kahneman once said, “Hindsight makes surprises vanish.” The hindsight bias can lead investors to constantly fight the last war. Since the financial crisis the last war has made top calling in the markets a cottage industry. Looking back now the peak before the prior crash looks easy. It was not. Predicting when the music will stop is not easy. This piece I wrote for Bloomberg shows why.

There’s a simple reason the future always feels uncertain but the past seems relatively orderly: No one has any idea what the future holds, while hindsight allows us to assume that the past was more predictable that it actually was.

Take the Great Financial Crisis. The majority of investors, economists, policy makers and regulators were completely blindsided by the worst economic and stock-market downturn since the Great Depression. Yet when these same people look back at that fateful 2007-2009 period, it seems many of them now believe that they knew it was coming and called it in advance.

It can be very lucrative to be right about major market events. Many who actually did see the crisis coming became household names in the finance industry and parlayed that success into book deals, keynote speeches, television appearances and “thought leader” status. Since so many people were cheerleading right up until the market crash, no one wants to get caught flat-footed again, leading to a steady increase in the number of people now calling for a market top.

Markets tend to go from one extreme to another, but tops are easier to see in the rear-view mirror than in real time. To get a sense of why, take a look at every bear market since World War II along with a number of different indicators and yields seen at prior peaks: 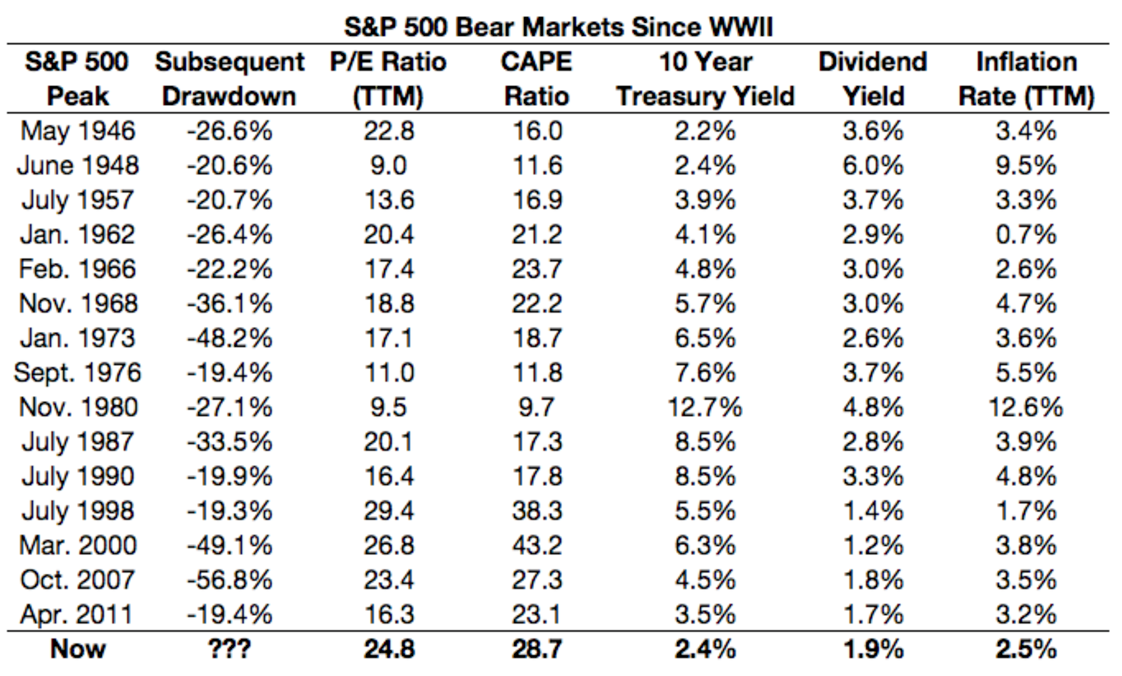 Stocks were a bargain based on many valuation metrics in the late 1940s, mid-1970s and early 1980s, but that didn’t stop the market from falling around 20 percent in each instance. Stocks were expensive in the fall of 2007, but they didn’t reach the nosebleed valuation levels of the late-1990s tech bubble.

The stock market has three main drivers of performance — trend, sentiment and fundamentals. The first two factors dominate the last one right up until investors decide it’s time to start paying attention to fundamentals again. Sentiment tends to follow price, so at a certain point, the trend in the market is the only thing that matters. And when that happens the market turns into a confidence game.

There has to be some sort of trigger or event that will cause investors to lose confidence in the market’s ability to keep going higher and ignore any underlying fundamental concerns. The power and magnitude of trends remains underappreciated in the investment world. As John Maynard Keynes said, “Markets can remain irrational longer than you can remain solvent.”

There’s no formula for forecasting market tops because you’re really trying to predict human behavior, which can’t be done. Trees don’t grow to the sky, but that doesn’t make it any easier for investors to guess when the inevitable mean reversion trade will kick in. Fundamentals matter over the very long term, but in the short-to-intermediate-term, the stock market is a confidence game. The market will top out and experience a bear market when investors lose their nerve for some reason.

So there’s a good chance the next market peak will be caused by a downturn in the U.S. economy. Unfortunately, predicting a recession is just about as difficult as picking a market peak. The next time the market tops out it will seem so easy to have predicted it after the fact. Getting there ahead of time is the tricky part that no one has quite figured out yet with any precision.