The asset class quilt is my favorite performance chart because it illustrates how difficult it can be to predict the winners and losers each year in the markets. There’s little rhyme or reason for how these things play out from year-to-year so it provides a good reminder for investors to understand that any single year’s performance in the markets is fairly meaningless.

Here’s my updated quilt through the end of 2016 (click to enlarge):

Small caps and mid caps led the charge in 2016 following subpar performance numbers in both 2014 and 2015. Both have pretty decent 10-year annual return numbers as well, especially when you consider the damage done to stocks in 2008. All ten of these asset classes were positive last year so if you didn’t make any money in 2016 you probably tried a little too hard with your investments.

Looking at the longer-term 10-year annual returns, what stands out to me is how awful the international and emerging markets equity returns have been. The EAFE (Europe, Australasia, Far East) has given investors the same returns as cash. Emerging markets haven’t been much better. The only worse place to put your money would have been commodities which are now down a painful 50% over the past decade.

It’s also crazy how much of an impact a few years here or there can have on the 10-year return numbers for these asset classes. Check out how the 10-year rankings for annual performance have changed in recent years depending on the end date chosen: 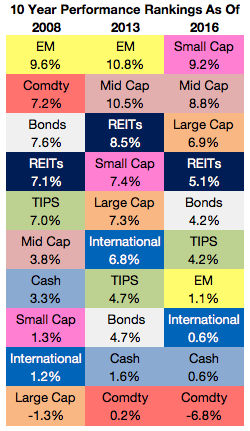 Emerging markets dominated asset class returns in the early-to-mid-2000s which are reflected in the strong returns in both year-end 2008 and 2013. Yet just a few short years later, the returns have completely fallen off a cliff. Commodities have seen an even worse dropoff in performance.

On the flipside of this relationship, you can see how poorly large cap U.S. stocks performed through the end of 2008, giving investors a lost decade of returns in the S&P 500. Those numbers have reversed to a healthy 7% or so annual return in the most recent numbers. Small caps and mid caps were also laggards in the 2008 numbers and have seen strong comebacks in their performance numbers ever since.

Unfortunately, this gives and take is the way things work with a diversified asset allocation approach to the markets. There’s always going to be something in your portfolio that leads and something else that lags.

Those investors who are successful with this type of strategy understand that this is how things work in the markets. There are going to be times where risk assets give you poor returns over even decade-long stretches. That’s the nature of risk.

The whole point of being a diversified investor is that you never set yourself up to exclusively own the one or two asset classes that draw the short straw over any long-term time frame. But it also sets you up to take part in the big winners.

The late-Peter Bernstein once told Jason Zweig the following:

The riskiest moment is when you’re right. That’s when you’re in the most trouble, because you tend to overstay the good decisions. So, in many ways, it’s better not to be so right. That’s what diversification is for. It’s an explicit recognition of ignorance. And I view diversification not only as a survival strategy but as an aggressive strategy, because the next windfall might come from a surprising place. I want to make sure I’m exposed to it. Somebody once said that if you’re comfortable with everything you own, you’re not diversified.

I love the description Bernstein lays out calling diversification both a survival and aggressive strategy. The great thing about having a balanced approach is that it works both ways. Investors have a hard time dealing with the hated parts of their portfolio but that’s the price of admission to be able to take part in the asset classes or strategies that do perform well.

In this way, I see diversification as a hedge against your own overconfidence and inability to predict the future. It’s not for everyone but I find it’s the best form of long-term risk management an investor can implement.

Further Reading:
When Global Stocks Go On Sale
Diversification Is No Fun