I’m a huge proponent of index funds for a number of reasons that most people have heard ad nauseam:

There are plenty of people out there worried about index funds but most of their claims are likely unfounded or misunderstandings about the way things work in the markets. The ones I don’t buy are that indexing gives you “mediocre” or “average” results (it doesn’t – it almost guarantees you’ll be top quartile after fees) or that there are fewer investors allocating capital correctly (most of the money coming out of active funds was being closet indexed anyways) or index funds are a fad (I believe the shift to low-cost investments is secular, not cyclical).

On the other hand, it would be silly to claim that the tsunami of fund flows into index funds will have no impact. Just this week John Bogle, the king of index funds, had the following to say on the subject: 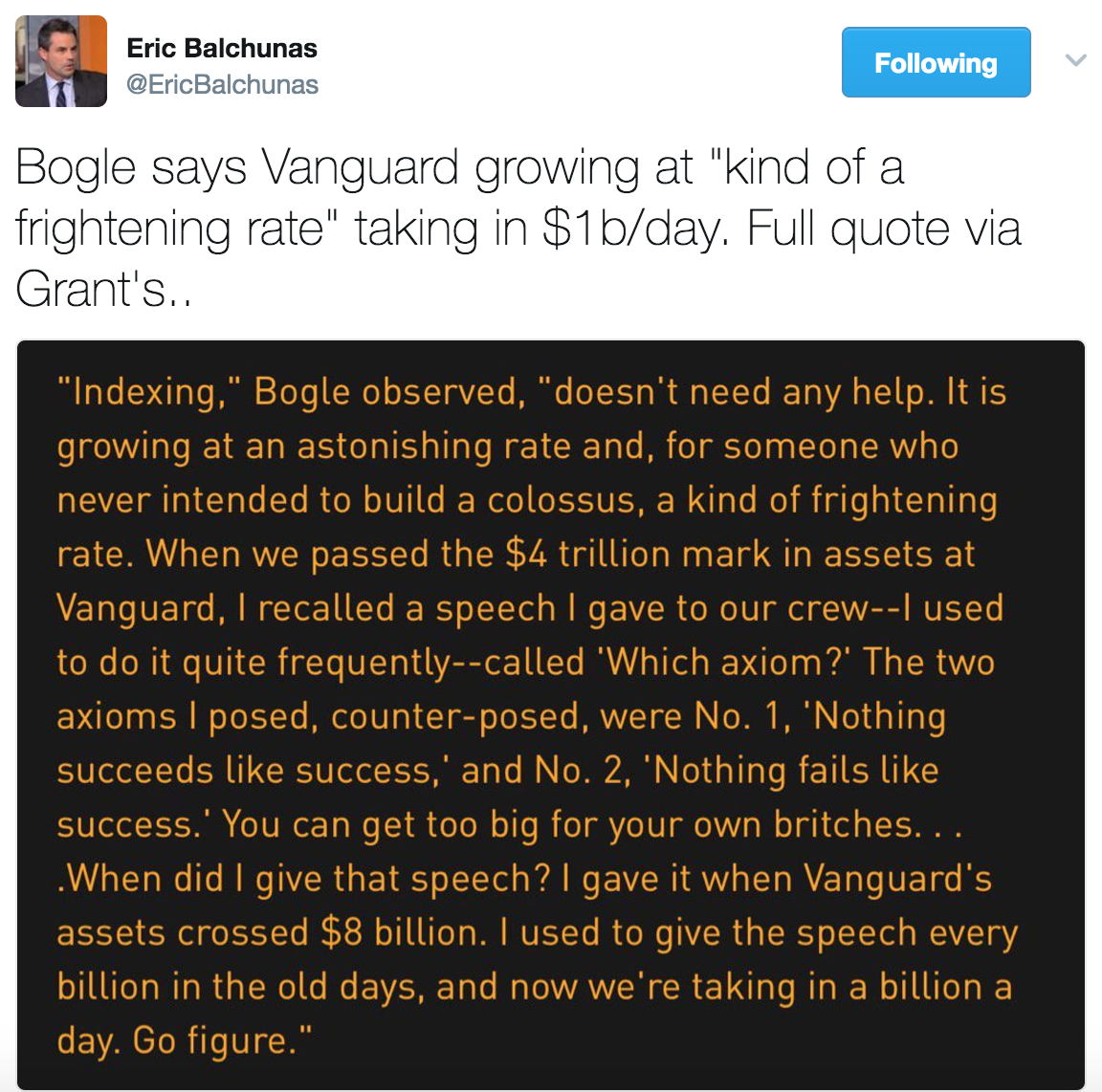 Vanguard had around $2 trillion in assets in 2014. They now have double that amount less than three years later. This is an unbelievable achievement and has likely saved investors billions of dollars in fees but it’s right of Bogle to question whether there could be some drawbacks to this massive growth.

It’s intellectually honest to look at the other side of any argument but especially one in which you have strong views. Mr. Bogle’s comments got me thinking about some of the potential downsides of the popularity in indexing so allow me to play Devil’s Advocate on index funds:

Weak hands could lead to more volatility. There are sure to be weak hands entering index funds who will bail at the first sign of trouble. No matter what fund type is used there will always be a certain segment of the investor population who will panic and sell or buy at the wrong times. These weak hands could certainly cause an uptick in short-term volatility as they pile into and out of index funds at inopportune times. Performance chasing is as old as the hills and it tends to amplify things at the extremes. Risks could rise as more and more investors buy into index funds who have no intention of sticking with them over the long-term.

“Index” can be a subjective term. Most of the money is going into traditional index funds that track something like the S&P 500 or a total market fund but there is plenty of money going into products that are index in name only. The number of choices now available in ETFs and index or index-like products can be overwhelming and many are meant to be sold, not bought. Our brains don’t function very well when faced with an ever-increasing number of choices. The temptation to make a change to your portfolio has never been greater.

ETF turnover is bonkers. The underlying funds may have low turnover in their holdings but investors are increasingly trading ETFs at ridiculous rates (lately SPY is averaging 76 million shares traded a day). My theory is that ETF-picking will take the place of stock-picking as a hobby for many investing enthusiasts in the years ahead. The behavior gaps are going to be much larger than they would in similar mutual funds because ETFs are easier to jump in and out of. Low costs can easily be lost and then some with one poor timing decision.

Indexing is no panacea. Stocks can and will go down by huge chunks in the future. Even if you’re keeping your turnover, taxes, and costs lower than they would be in an active fund, you’ll still have to deal with bear markets and market crashes in index funds. This can be a very emotionally challenging strategy. It’s not for everyone.

No one knows the equilibrium between active and index funds. Professional investors love to debate about what would happen if everyone indexed. These types of arguments are unhelpful because it’s like asking what would happen if everyone started exercising regularly, eating right, saving money, avoiding credit card debt and compromising on their political views. We’re not going to see a mass outbreak of rationality. Still, no one really knows what the sweet spot is for the total amount of funds in passive products. 50%? 75%? I don’t know if we’ll ever get that high but it’s worth considering what the consequences could be. It’s impossible to know the exact impact if indexing does become too popular because there will be no counterfactuals as things play out but there would certainly be ramifications in the investment business and markets if something like this were to occur.

The concentration of power could lead to ‘normal accidents.’ Sociologist Charles Perrow coined the phrase ‘normal accidents’ in the 1980s to describe how large accidents, although rare, are inevitable, and even normal in a complex system. And he stated that the risk is heightened when those complex systems are tightly wound. Having a majority of the investor capital going to a handful of fund firms increases the likelihood of a normal accident in the markets, which could be amplified by either human or organizational error.

So there you have it — my other side of the argument on the popularity of indexing. I still think the pros outweigh the cons overall but it’s always a good idea to consider the risks involved when any idea becomes so popular.

Further Reading:
The Passive Investing Revolution That’s Not So Passive
Index Funds Are Nothing Special