Tim Ferriss had a wide-ranging interview on a recent podcast with Ezra Klein. They touched on a few subjects where Ferriss was quick to point out he didn’t have all the answers. I liked how he framed the idea of our overconfident nature:

Humans are, and history certainly proves this out over and over and over again, epistemologically arrogant. We think we know more than we know. And one of my metrics for a good doctor is how often they say, “This could be wrong” or “We don’t know.” And, in fact, good doctors will jokingly often say, “50% of what we know is wrong, we just don’t know which 50%.” We really are only scratching the surface of understanding the environment in which we live, much less ourselves.

I love the old quote that goes something like, “The more I learn, the more I realize how much I don’t know.” This has certainly been the case for me personally. Earlier this week on Twitter I posted the following hand drawn guide that shows the level of confidence in my predictive abilities based on the amount of time I’ve spent dealing with the markets: 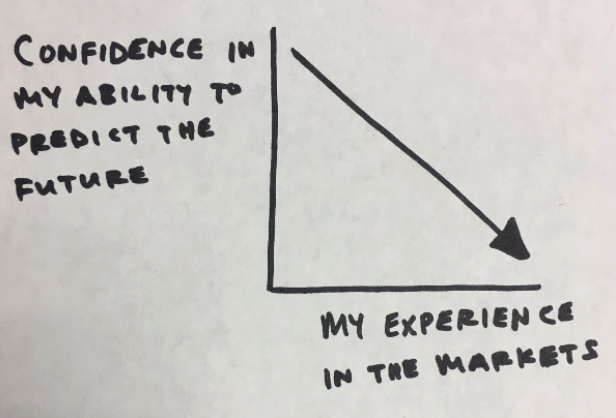 When I find myself 100% certain of a market outcome I try to use that as a signal to re-check my initial assumptions. The markets are a very humbling place. Those who don’t appreciate this fact aren’t going to be very successful because the market doesn’t care what you think or how you feel.

Much of the epistemological arrogance in finance stems from career risk and misplaced incentive structures. When you add in ultra-competitive people who are well-educated with type-A personalities you have a recipe for a group that thinks they know more than they know. This aura of certainty that finance people put out there can be very comforting to those outside the world of finance who are looking to these masters of the universe for advice or guidance. Yet it’s a false sense of security.

My favorite example of this comes from the classic 1990s movie Tommy Boy with the late Chris Farley. In one scene, Farley is trying to talk one of his auto parts customers into staying on as a client but the customer likes the fact that a competitor offers a guarantee on his box (which I somehow talked my publishers into putting in my first book):

Tommy: Let’s think about this for a sec, Ted. Why would somebody put a guarantee on a box? Hmmm, very interesting.

Tommy: Here’s the way I see it, Ted. Guy puts a fancy guarantee on a box ’cause he wants you to feel all warm and toasty inside.

Tommy: Course it does. Why shouldn’t it? Ya figure you put that little box under your pillow at night, the Guarantee Fairy might come by and leave a quarter, am I right, Ted?

Tommy: The point is, how do you know the fairy isn’t a crazy glue sniffer? “Building model airplanes” says the little fairy; well, we’re not buying it. He sneaks into your house once, that’s all it takes. The next thing you know, there’s money missing off the dresser, and your daughter’s knocked up. I seen it a hundred times.

Ted: But why do they put a guarantee on the box?

Tommy: Because they know all they sold ya was a guaranteed piece of sh* t. That’s all it is, isn’t it? Hey, if you want me to take a dump in a box and mark it guaranteed, I will. I got spare time. But for now, for your customer’s sake, for your daughter’s sake, ya might wanna think about buying a quality product from me.

People want guarantees, certainty, and precision when planning for the future. The problem is most people really need to hear the following every once and a while:

This stance often makes for a poor sales technique because people find comfort in perceived certainty. It makes you feel good about yourself. But guarantees aren’t really worth anything if they don’t have quality people or services behind them and even then no one can predict the future. I find it’s a good rule of thumb to question the opinions of those who are too sure of what’s going to transpire. Here are a few more words and phrases that should give you pause when listening to a pundit or receiving financial advice:

It may not feel right because of the way we’re hardwired to be overconfident in our own skills, but I think the first step towards becoming a better investor is letting go of any illusion of certainty and having the willingness to admit that the markets are hard. Once you can admit these things to yourself it allows you to avoid so much of the noise that pollutes the world of finance and frees you up to focus on things that really matter.

Further Reading:
The Value of I Don’t Know

Words on a page don’t really do Farley justice so here’s the scene from Tommy Boy for anyone who needs a refresher: