Dr. Atul Gawande recently shared a story in The New Yorker about a man named Bill who started to experience severe migraines at age 19. The headaches eventually became almost a daily occurrence that would cause extreme pain, make him throw up and generally make life so miserable that he had to quit his job because he couldn’t function any longer.

He saw every doctor or specialist imaginable for the chronic headaches but nothing worked. It wasn’t until he was in his 50s that he tried a new specialist, Elizabeth Loder, that things finally turned around for this tortured man. The strange thing is she didn’t have a magic elixir that would instantly clear up his migraines. In fact, experts say that there really aren’t any simple solutions for migraines and a complete cure is unlikely for many.

They tried a number of different treatments but showed little progress in the first few years:

After the first few rounds of injections—each treatment lasts three months and is intended to relax but not paralyze the muscles—Haynes noticed no dramatic change. He was on four medications for prevention, including the Botox, and had four escalating rescue treatments that he could resort to whenever a bad headache began to mount. Three years had passed, and progress had been minimal, but Loder was hopeful.

Instead, it was a more patient, incremental approach using a variety of treatments that finally did the trick:

“I am actually quite optimistic about his long-term outlook for improvement,” she wrote in her notes that spring. “I detect slow but steady progress. In particular, the extremes of headache at the upper end have come down nicely and vomiting is much less of a problem. That, in my experience, is a clear sign of regression.” Haynes wasn’t so sure. But after another year or so of adjustments he, too, began to notice a difference. The interval between bad attacks had lengthened to a week. Later, it stretched to a month. Then even longer.

When I met Haynes, in 2015, he’d gone more than a year without a severe migraine. “I haven’t had a dreadful attack since March 13, 2014,” he said, triumphantly. It had taken four years of effort. But Loder’s systematic incrementalism had done what nothing else had.

After four decades of agony Haynes finally had his life back. But it wasn’t a miraculous one-off cure that gave him a new lease on life. Medical breakthroughs, emergency procedures, and life-saving drugs get all of the headlines, but most of the time short-term breakthroughs aren’t nearly as effective as lifelong incremental care and ongoing treatments.

Incrementalism is no fun because you don’t get to see immediate results. But in many domains, it’s the best way to see lasting results. Saving money is a perfect example of this. Increasing the amount you save each year by a small sum will seem pointless in the short-run because it’s difficult to see the results over shorter time frames.

But over longer time frames, incremental steps can have a much larger impact. Take a look at the following example which shows the difference in ending balances from various savings rates on a $100,000 household income (assuming a 6% annual return): 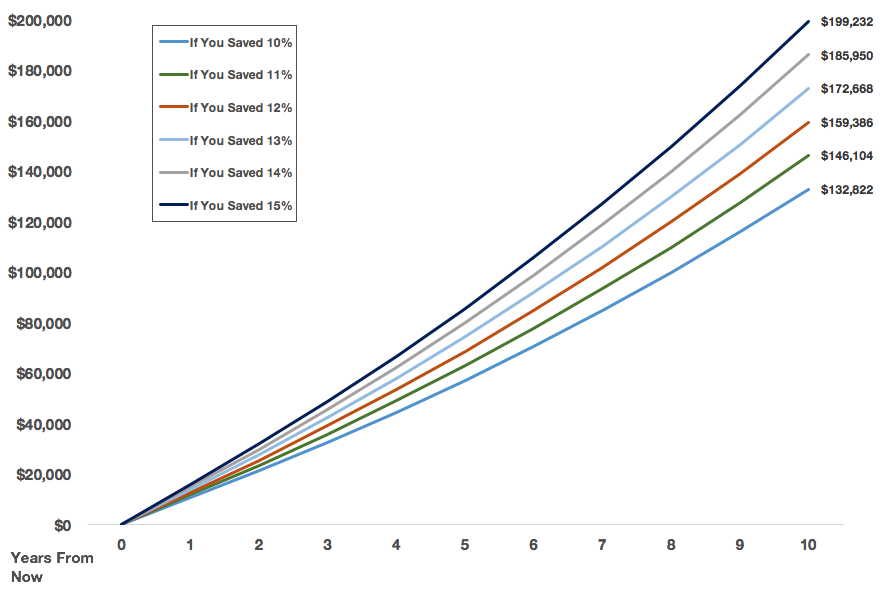 Simply saving 1% more of your income per year can lead to a much larger balance down the line. Each minor step up leads to an even larger increase in the ending balance after a decade of saving.

Another incremental step that can add even more value to a savings plan is to increase your savings rate each year as opposed to keeping it static. The following chart shows the same beginning savings rates (along with the same assumptions for returns and salary) but this time the savings amount is increased each year by just 2% (so if you start out saving 10% or $10,000 the next year you would save 10.2% or $10,200 and so on): 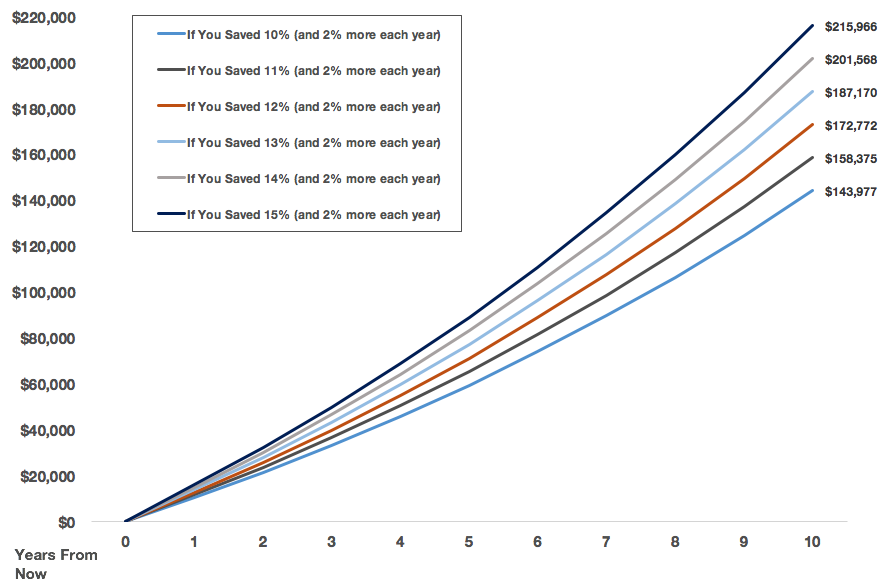 You can see an even bigger jump in the ending balances from these small increases over time. In the early years, you won’t see much progress from these small changes but over longer periods the results begin to accrue on top of one another until we’re talking about real money.

My colleague Josh Brown likes to talk about the virtues of cumulative advantages that can come from finding a number of slight edges to succeed with your investments. Things like:

Individually these ideas may not always add up to much, especially over the short-run. It’s when they’re all combined over longer time frames they can compound in your favor and really add to your bottom line.

People like to look for shortcuts or lottery-ticket strategies that could make their life easier. It’s much easier to focus on what’s right in front of us at this moment, but you can often see beneficial results over the long-term through incremental gains and slight edges.

It’s not a sexy strategy but it can work for those who are patient enough to see it through.

Source:
The Heroism of Incremental Care (The New Yorker)

Further Reading:
Learning How to Make Progress From Chris Pratt