“A personal finance crisis is almost inevitable unless you address the truly important tasks in your life before they become urgent.” – Carl Richards

Here’s another one to add to the ever-growing list of scary household saving stats courtesy of Businessweek:

Just 45 percent of upper-middle-class households (income from $75,000 to $99,999) saved anything in 2012, according to the Fed study. That means the other 55 percent didn’t save for a house, retirement, or education. About 16 percent spent more than they earned and went further into debt. The report highlights the consequences of these hand-to-mouth habits: Only half of these households had enough savings to finance three months of living expenses if they lost their job or couldn’t work. A $400 emergency would force about 20 percent of them into months of debt.

Although the financial crisis was tough on many people’s finances, this isn’t necessarily an issue born out of a severe recession. This has been going on for some time now as you can see from this graph: 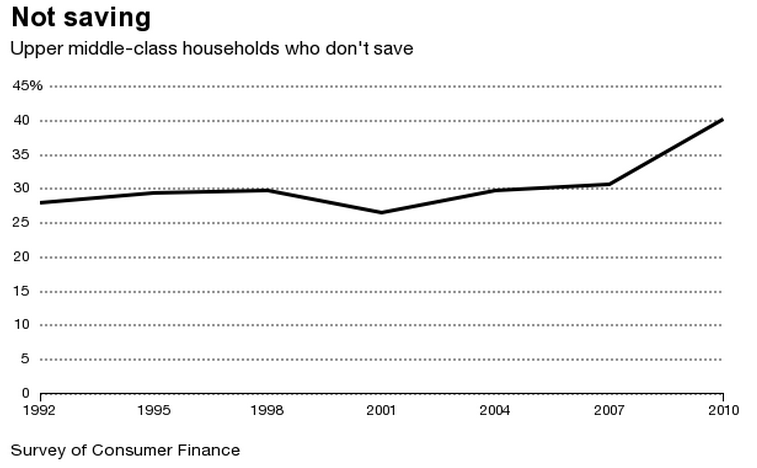 These aren’t lower income households. This is a large percentage of the upper middle-class that don’t save a dime.

You could point to any number of reasons for the fact that people don’t save any money, but for many it’s simply too difficult to know where to begin. No one teaches you how to manage your personal finances in school. You’re on your own.

The problem for most people is that it’s easy to find reasons to not save any money. There will always be something there to impede financial progress.

It’s almost cliché at this point to compare fitness or losing weight with personal finance principles, but the analogy works. A recent Esquire profile on Chris Pratt (of Parks & Rec and Guardians of the Galaxy fame) reminded me of how difficult it can be for people to just get started when they’re in a rut.

Here’s Pratt talking about the changes he’s seen since he went from being overweight to getting into super hero shape:

When I was way out of shape, the idea of using whitening strips on my teeth seemed terrible. I have to do that every day? I’ll never do it. What you want is instant results when you’re out of shape. You want your teeth whitened in 45 minutes with the use of lasers.

Substitute saving for retirement, paying off credit card debt, creating a budget or any of the personal finance basics for teeth whitening here. When it seems like there are a million different things you need to do to turn your finances around, doing the little things will seem pointless.

But it’s amazing how small successes can build on one another like compound interest once you start to see some progress from putting simple systems in place. Here’s Pratt with how his views have changed now that he’s turned things around:

I like clothes now. I have more energy. I sleep better. My sex drive is up. Blood’s flowing. I’m less susceptible to impulse. I’m in a different mode.

But when you’re in shape, you know it’s the result of doing a little bit every day. Moments aren’t just moments. A moment might be a week or a month. So instead of Boy, I’d love to eat this hamburger right now, I’m considering a little further into the future. I’m thinking, I eat that hamburger and that’s 1,200 calories, and I’m gonna work out tomorrow and lose 800 calories. I may as well eat a salad here, still do that workout, and then I’m actually making progress.

Generally, this is how financial progress is made as well. Your entire mindset changes and instead of treading water you actively search for ways to continue making progress. And the incremental daily changes that Pratt talks about start to evolve into the correct long-term mindset that gets results.

There are no shortcuts to building a solid personal financial ecosystem. It’s about instituting systems that allow you to build wealth methodically over time. The easiest first step in the process is to automate as many financial decisions as possible. Progress doesn’t have to be impossible but it’s never going to come from a quick fix.