Robert Shiller has the following definition for a bubble:

I define a speculative bubble as a situation in which news of price increases spurs investor enthusiasm, which spreads by psychological contagion from person to person, in the process amplifying stories that might justify the price increases and bringing in a larger and larger class of investors, who, despite doubts about the real value of an investment, are drawn to it partly through envy of others’ successes and partly through a gambler’s excitement.

So what exactly are we supposed to call the bond market these days?

People have been saying bond yields are in a bubble for the last 4-5 years or so yet rates continue to fall. This morning the 10 year treasury yield hit the lowest level on record at just a hair over 1.3%.

Just take a look at the interest rates across a number of different maturities around the globe in various developed markets (as of yesterday afternoon): 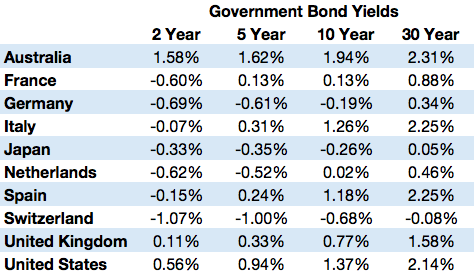 Yields are nonexistent even out to 30 years in some cases.

To be fair, these are nominal yields and don’t include inflation, which is also nonexistent in many of these countries. When comparing historical yields you have to consider the inflationary environment that we’re in and many countries are seeing deflation at the moment. It’s also true that central banks have been large buyers so the market is somewhat distorted. And sure there are momentum players who have jumped on the bandwagon here, but it doesn’t exactly feel liked bonds are anywhere near Shiller’s definition of a speculative bubble.

If anything, we seem to be in some sort of anti-risk-taking bubble where investors have become so starved for safety that they’re willing to invest their money with the promise of little-to-no income or yield.

To me this feels like a scenario where no one really has a clue what it all means.

Are central bankers holding down rates by buying up all the bonds through monetary policy?

Is it foreign buyers of bonds holding down yields because they have nowhere else to turn?

Are investors nervous about risk assets and willing to earn nothing in return for the safety of their assets?

And what about these bond vigilantes I’ve heard so much about? Weren’t they supposed to force the Fed’s hand a few years ago by driving up rates?

How have investors gone from worrying about the effects of hyperinflation at the start of QE to now accepting negative interest rates in many developed market economies?

Is gold technically a chase for yield in a negative interest rate environment?

Is this partly a problem with confidence in the system and the prospects for growth in the future?

Maybe all of the above or a few pieces I’m missing at the moment.

I’m generally not one to complain about central bank actions because we have to invest in the markets as they are, not as we wish them to be. But there are some huge potential ramifications should this persist:

I’m not smart enough to understand what the consequences of ultra low and negative interest rates will be. It’s really going to depend on how long they stick around for and what the future trajectory of economic growth and inflation end up being. If and when rates ever do rise, I think it’s also going to be important to understand why they’re rising. If it’s because of an uptick in wages, inflation and economic growth that’s a net positive for the economy. If it’s because people start dumping their bonds that’s a whole different story.

To answer my original question, I don’t think bonds are in a bubble, but I also don’t think today’s interest rates are healthy. I have a feeling today’s rates will make for an interesting case study some day when financial historian looks back at this period.

Further Reading:
What If Risk Free Returns Slowly Go Away?