The U.S. has the largest, most liquid financial markets in the world. We also have one of the most globalized set of corporations that make up our stock market. The S&P 500 now gets something in the order of 40% of its sales from overseas. Based on this information, I’ve been asked the following question dozens of times over the past year:

Why do I need to invest in foreign stocks when the U.S. companies are now so global and the markets are so highly correlated?

It’s a legitimate question. The way I see it, you’re not only getting geographic diversification by investing in overseas markets. The industry make-up of each market also varies by region. Take a look at the industry breakdown for the S&P 500, MSCI EAFE and MSCI Emerging Markets indexes: 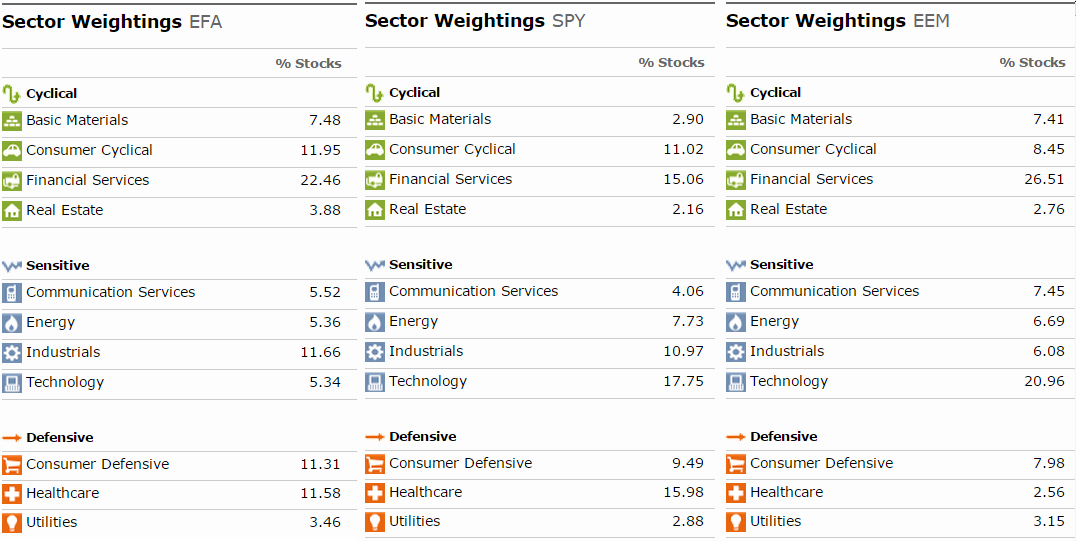 Also, increasing correlations among countries and global markets should be expected as globalization takes hold and economic policy is becoming more coordinated. But increased correlations don’t tell you anything about the outcomes of the different markets. Take a look at the following graph which shows the rolling 5 year correlations between the S&P 500 and the MSCI EAFE index of developed foreign markets: 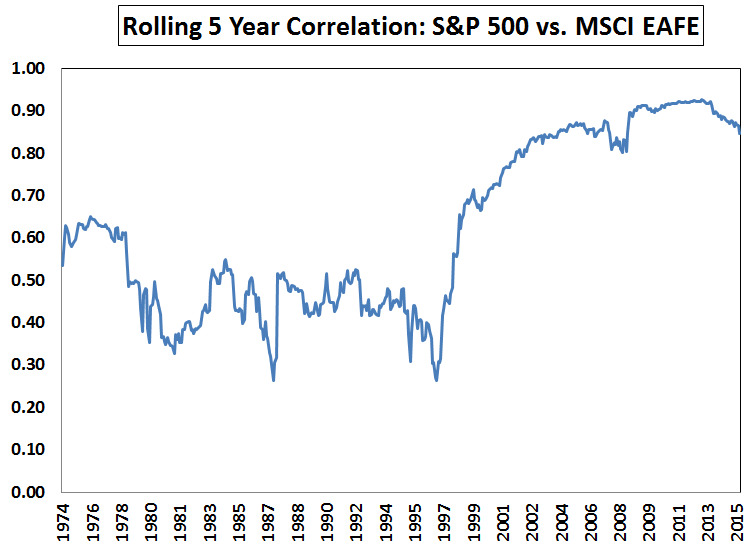 Now here’s the S&P against the MSCI Emerging Markets Index: 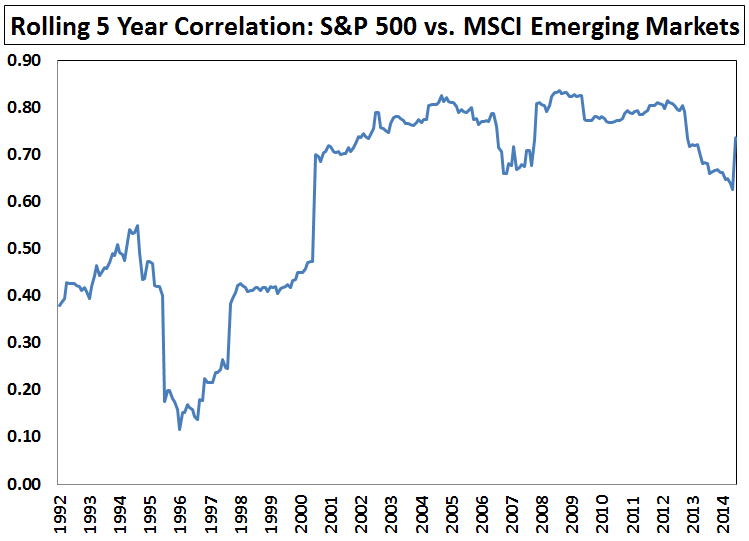 There’s a clear trend over time and it’s true that markets are becoming more correlated. But take a look at the past five year’s worth of returns for these markets along with the previous five years and the past ten years:

The correlations with the S&P 500 to foreign developed and emerging market stocks over the past 5 years were 0.86 and 0.75, respectively. In the previous 5 year period, they were 0.91 and 0.83. But this didn’t lead to similar returns numbers.

Since stocks generally go up over time, investors have to expect that different markets will be correlated with one another, but correlation says nothing about the differences in performance. It’s just statistical relationship that shows they’re generally moving in the same direction.

By investing abroad you’re not only gaining exposure to different countries, industries, currencies and individual companies, but there’s also a cultural element that I think is under-appreciated. No matter how globalized the world becomes, there will always be cultural differences. These differences will affect the way that investors in certain countries or regions will invest. Global diversification allows intelligent investors to take advantage of the reactions, biases and mistakes of investors in other markets. Even with increased correlations, investors around the globe are never going to be completely in sync with one another.

I cover diversification extensively in my book, because I think it’s one of the most important aspects of portfolio management. Here’s my take on global diversification from the book:

Globalization is making the world a flatter place, as technology is slowly leveling the playing field and allowing people from all walks of life to have access to insane amounts of information. There are also sure to be upheavals and crises in different countries and regions around the globe. Increased globalization will, at times, result in spill-over effects into the rest of the world. Other times, crises will be contained in certain areas that don’t have diversified economies or markets.

The United States has been one of the clear winners of the past century in terms of becoming an economic powerhouse and providing investors with juicy returns in risk assets. While the United States has many built-in advantages, remember, that America was once an emerging market too. From the late 1700s to the early 1900s, the United States averaged a recession every two years.

Owning risky assets such as stocks can be thought of as a way to ride the coattails of intelligent people as they continue to innovate. It has never paid to bet against human ingenuity. Investing in foreign markets is a bet that people in other parts of the world wake up every morning wanting to improve their standing in life as well.

In a recent Q&A with Wes Gray I said I view diversification as a willingness to admit that you have no idea what’s going to happen in the future. I’m sure investors who stick exclusively with U.S. stocks will probably do just fine in the future. But why take the risk?

Here’s what I’ve been reading this week: