The Brexit vote has dominated the financial and political news cycle for the past few days (and rightly so). People are angry, confused and there are plenty of opinions out there on the potential implications on globalization, immigration, free trade, the working class, elites and a whole host of other topics that people are using this situation as an excuse to bring to the fore.

I have a feeling this whole mess is going to be playing out for a number of years so I wanted to look beyond all of that and see what the impact on the markets has been.

Going by the Vanguard Total World Stock Index Fund, the United Kingdom makes up roughly 7% of the total world stock market cap. It’s the 5th largest economy in the world, but we’re talking about a relatively small impact in stock market terms. Of course, it’s not just the UK that people are worried about; it’s the possible contagion that could spread to other countries and how this vote will impact their markets and economies.

The performance numbers on European country stock markets were not pretty on Friday: 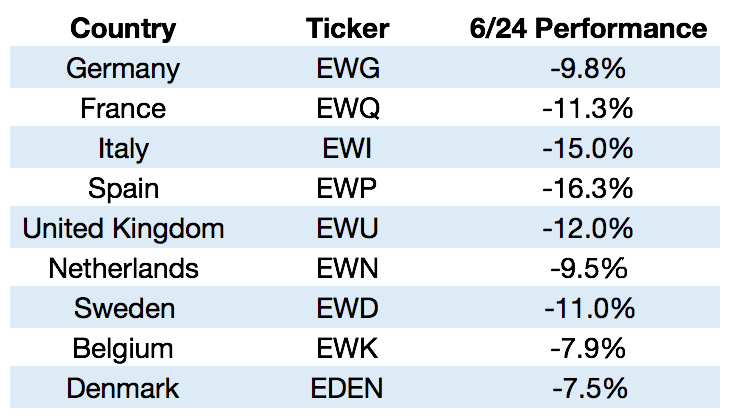 You can see investors are worried about countries beyond the UK. Many of these single country ETFs hit the standard definition of a correction in a single day. Investors are always told to buy when there’s blood in the street so I wanted to take a look at European equities to see where we stand at the moment in terms of buying potential.

From a historical perspective there hasn’t been a huge difference in terms of performance between European and U.S. stock market returns: 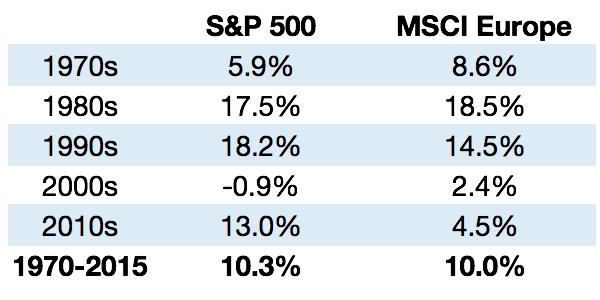 The overall annual returns are fairly close and each has taken its turn in the lead position. This graph shows the rolling 5 year over- and underperformance of U.S. stocks relative to European markets: 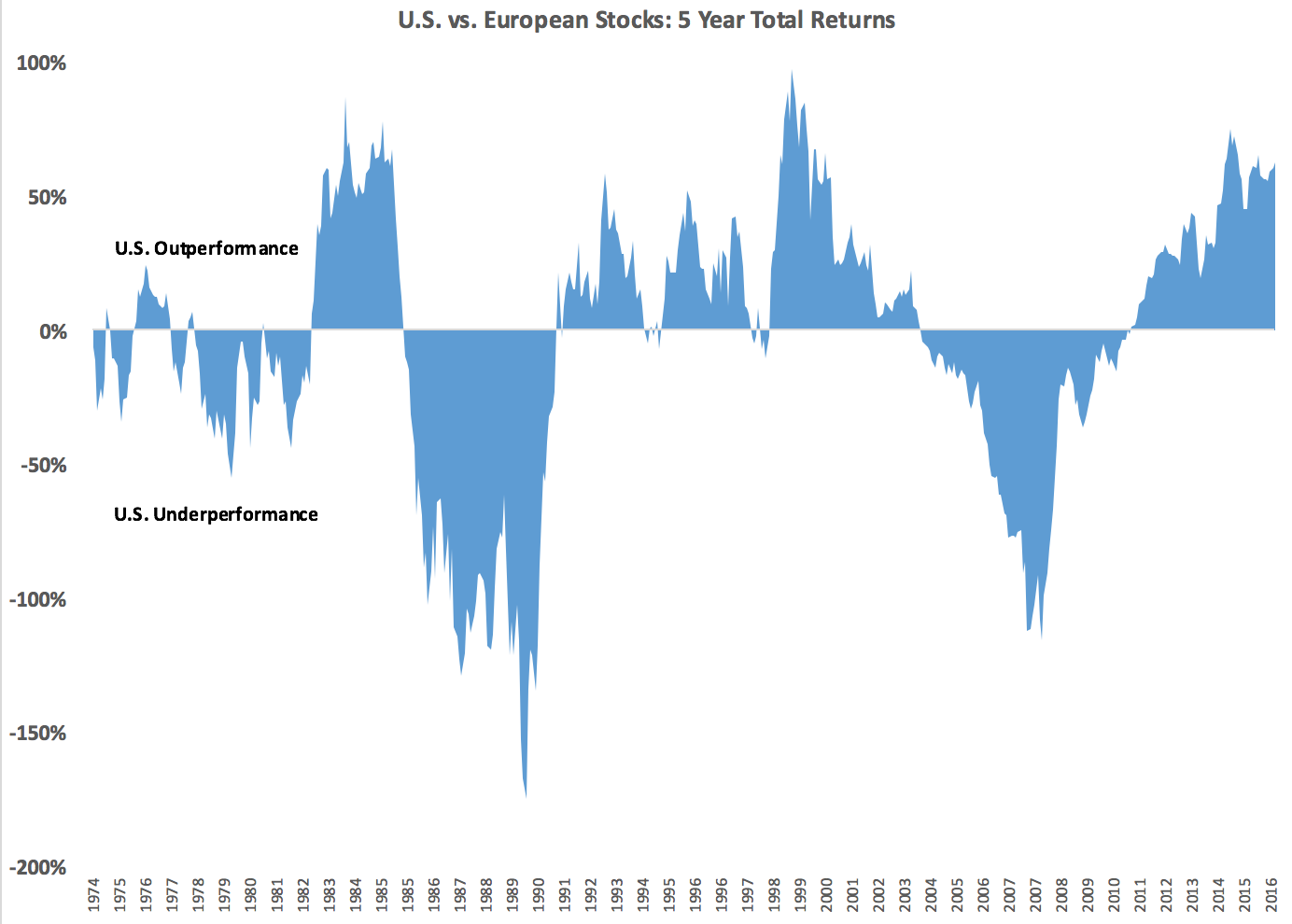 The relationship is very cyclical as any investor holding international stocks over the past 5-7 years can attest to. U.S. stocks have really been the only game in town as they’ve outperformed European stocks by more than 60% in total over the past 5 years.

The U.S. continues to be labeled the cleanest dirty shirt in the laundry hamper because Europe and the emerging markets seem to be playing hot potato with their respective economic and political issues.

There’s plenty of investors asking themselves why it would ever make sense to invest abroad what with the recent performance in U.S. markets and the lingering issues in other parts of the world. And I understand why people would feel this way. It can be comfortable to invest close to home when things are a mess everywhere else (relatively speaking).

This divergence in performance has predictably led to a divergence in valuations as you can see from the table I put together comparing the recent metrics between U.S. and European stocks:

This is what you would expect to see when one market has done so well and another so poorly.

Valuation comparisons between different countries or regions aren’t perfect because of the differences in industries and individual companies, but it’s clear that stocks are much cheaper in Europe than they are in the U.S. Obviously, there’s no reason that European shares can’t get cheaper or U.S. shares can’t get more expensive. Valuations do a better job of telling you what to invest in, not when to invest.

A paradox of successful investing is that it’s rarely ever going to be comfortable to invest where the best bargains are found. Investments and markets don’t get cheap for no reason. You need bad news and poor fundamentals to see prices and valuations to drop to attractive levels.

You see, markets don’t necessarily trade on absolutes. Markets are all about expectations. And when expectations go too far in either direction, investors tend to be surprised by the future results. There is no such thing as a good or bad investment; just a good or bad price to be paid.

Europe is a mess.

For investors who are willing to be patient that’s usually a good combination.