The Great Financial Crisis was missed by such a large number of pundits, economists and investors that during the ensuing recovery we’ve seen a huge influx in the number of people trying to predict a the next downturn. People desperately want to call the next big one before it hits.

First it was fears of a double dip recession (that never came). Then we were told we were already in a recession in 2011 (also didn’t happen). Next oil or the dollar or emerging markets or China was going to lead to a recession. Eventually one of these predictions will be right as economic expansions don’t last forever.

Publicly traded companies have seen negative earnings growth two quarters in a row and there are no fundamental underpinnings for the rally, Savita Subramanian, BofAML’s head of U.S. equity and quantitative strategy, said on CNBC’s “Fast Money” this week.

“We are in a profits recession. There (are) no two ways around it,” said Subramanian, whose S&P 500 price target of 2,000 is among the lowest on Wall Street. She is also concerned about how Federal Reserve monetary policy could affect stocks.

“You have the Fed embarking on a long, slow tightening cycle. Tightening into a profits recession doesn’t sound like anything to throw a big party about,” she said.

I’m not trying to downplay a drop off in fundamentals. Falling earnings could be a harbinger of bad things to come in the markets. As we’ve been warned about for the past 3 or 4 years now, this recovery is getting a little long in the tooth.

One of the biggest problems in the world of finance is that people make proclamations without backing it up with evidence. So I wanted to see what the historical relationship looks like between profit growth and stock market returns. Using Federal Reserve data on corporate profits, I looked back at the historical growth rate of profits by decade and compared them to that decade’s stock market returns (using the S&P 500): 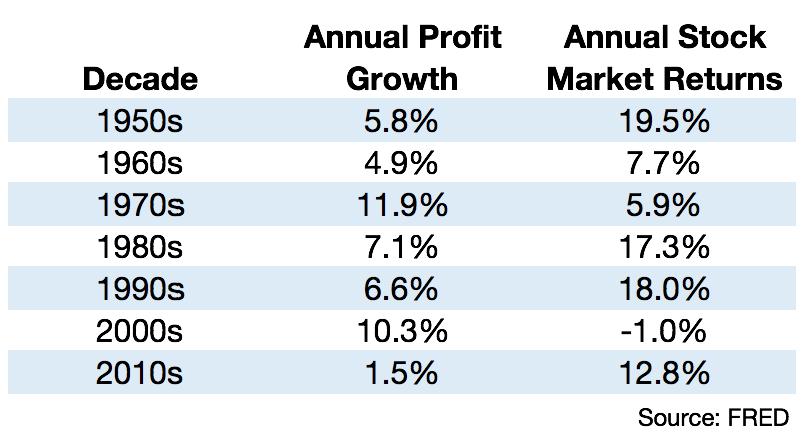 Now let’s break things down even further by market type:

(Although the S&P 500 was up 6% per year in the 1966-1981 period, many consider this a sideways market because the Dow went nowhere from a price perspective and once you take inflation into account real returns were basically zero.)

The greatest profit growth was seen in two of the worst-performing stock market decades — the 1970s and 2000s. But those periods were markedly different as the 70s saw sky-high inflation with rising interest rates while the 2000s had low inflation and falling rates.

This all really comes down to the problem with single variable analysis. You can never look at a single factor in isolation and use it to tell you exactly what’s going to happen with the stock market, even something as important as profit growth. There are so many other factors to consider here — inflation, the economic environment, allocation preferences, demographics, interest rates, profit margins, etc. Then you have to consider the all-important question of how much are investors willing to pay for current or future profits?

I’m not saying that profits aren’t important to the stock market. They are. Over this entire period since 1950 earnings have grown an astonishing 8000%+ or just shy of 7% per year. We need to see corporate earnings growth so companies can increase wages, invest in capex, pay out dividends and buyback shares.

When the next recession hits we will see profits contract and the stock market will likely go into a bear market. But for investors trying to figure out what’s going to happen in the coming cycle, the link between profit growth and stock market performance may not be as strong as some would have you believe.

Maybe the biggest takeaway here is that investors have a hard time figuring out how much to pay for future profits.

Now here’s the stuff I’ve been reading this week: