The S&P 500 has outperformed the MSCI World Index each of the past three years and six out of the last eight. This is quite a run when you consider how often U.S. stocks have outperformed the rest of the world’s markets over historically.

Since 1970, on a calendar year basis the S&P 500 has outperformed 23 out of 46 years or 50% of the time. On a rolling three and five year basis it was also a dead heat at 50% for each. At the seven year interval the U.S. has outperformed 48% of the time. It looks like a coin flip to see which markets outperform over both shorter and longer time frames. The returns are also fairly similar with annual gains of 10.3% and 9.5%, respectively, for U.S. and foreign shares.

Yet the total returns have seen some huge divergences in that period. This graph show the relative outperformance of the S&P 500 versus the MSCI World ex-U.S. over rolling seven year periods since 1970: 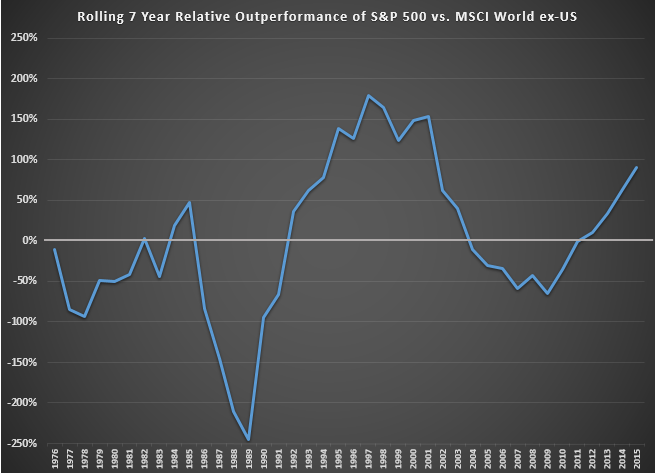 Since 2009 the U.S. has clearly been the big winner, outperforming by nearly 100% in total. One would assume this trend would show some mean reversion eventually but these markets have seen even wider dispersion in the past from a relative performance perspective.

In the 1970s and 1980s the dominance of Japanese stocks saw world markets outperform U.S. stocks by almost 250% in the seven year period ending in 1989. From there the U.S. dominated in the 1990s and ended up outperforming foreign stocks by almost 200% by the tail end of that decade (hello mean reversion).

The question then becomes — if the returns are similar over the long-term, what’s the point of diversification between the various markets? The reason many investors ask this question repeatedly is because diversification within risk assets rarely, if ever, earns its place in a portfolio over the short-term.

I did a similar comparison between the S&P 500 and the DFA Equity Balanced Index, which is a globally diversified index consisting of large caps, small caps, REITs, foreign stocks, emerging markets and value stocks (see below for the index weights). The following table shows the number of times the S&P 500 outperformed the more diversified equity index using rolling annual calendar year returns since 1970:

S&P 500 outperformance has dropped each time you go further out in your time horizon. I will say that one of the reasons for this outperformance is that DFA tilts towards small caps and value stocks, which have performed very well in that time. Even if the small and value premiums are lower in the future there are still many reasons to stay diversified as an investor.

Here are three reasons I think it makes sense to broadly diversify, both globally and within an asset class:

Further Reading:
Is International Diversification Worth the Risk?