Yesterday was a wild day in the markets. There was a huge gap down at the open, which followed through into the afternoon. Then there was a huge rally late in the day with another minor slide into the close.

The NASDAQ was down 3.65% at the low of the day by lunch time. At 3:30 or so it had erased all of those gains and was now up over 80 basis points (or 4.67% off the lows). When the dust clearer it finally ended the day down 0.12%. Had you just checked the closing prices it would have seemed like a fairly normal down day in the markets. But intra-day there was extreme volatility.

Historically, when markets start to fall this sort of volatility clustering is pretty normal. Meb Faber has an excellent white paper, Where the Black Swans Hide and the Best 10 Days Myth, that does a great job of showing how volatility has clustered together in the past: 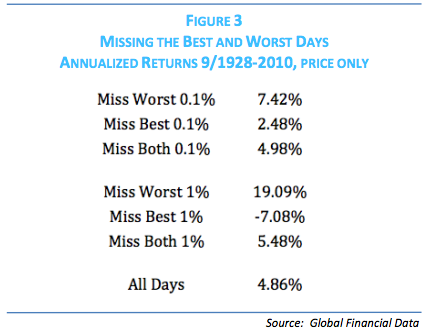 Faber shows that missing both the best and worst days gives you fairly similar results to the overall market because they tend to occur during the same type of market environments, as you can see here:

When markets are in a downtrend they tend to be much more volatile. We see much more wild swings in both large up and down days during downtrends than we see in an uptrending market. In general, things are more orderly when markets rise than when they fall.

So why is this the case?

It’s impossible to know for sure, but my guess is that fear and panic cause investor emotions to change more on a day to day basis than greed and euphoria. If loss aversion shows that the pain from losing money is twice as bad as the pleasure we receive from making money then it would make sense that investors are more erratic during market sell-offs. Investors mare making even more emotionally-driven decisions with their portfolios than usual.

In his book Inside the Investor’s Brain psychologist Richard Peterson discusses the five principles of fear that are relevant in this discussion:

1. Fear leads to physiological changes in the body (forced breathing, sweating, head pressure). Thus, it can be personally identified.

2. Fear causes changes in how people think about and react to bad news (indecision, paralysis, building pressure, and panic). Thus, it often leads to bad decisions.

3. Fear is different from panic. Fear is an anticipatory emotional state.  Fearful people see many risks. Panic is reactive, and it is characterized by an urgent pressure to act immediately.

4. It takes tremendous effort to “keep one’s cool” when frightened.

5. Other investors’ fear can be detected in the markets, often via and experience reading of price dynamics.

Think about Peterson’s five fear principles in terms of the market action in recent months. Nothing has really changed that much in terms of the news flow — China, oil crashing, slowing global growth — but investors have finally started reacting to this bad news. And as Meb pointed out in his paper we are now seeing that fear play out in the price dynamics. You could also make the argument that this market is showing some signs of panic considering most stock markets have fallen double digits in less than a month to start 2016 (although true panic doesn’t usual kick in until we see much bigger losses).

After a period of relative calm for the past 5-6 years, it makes sense that we would eventually see increased volatility in the markets. It was only a matter of time considering it has occurred roughly one out of every three years in the past.

People are hard-wired to react differently under different circumstances. Some people can keep a steady hand and “stay the course” when these types of markets hit. Others overreact and abandon any semblance of a plan they may have had. Since it can take such a tremendous effort to keep a level head I’ve found that most successful investors follow a process that will guide their actions during these types of markets so they’re not forced to make decisions under duress.

There are really only three options investors have when presented with volatility:

Two out of the three tend to work for those who can keep one’s cool when others are frightened.

Sources:
Inside The Investor’s Brain: The Power of Mind Over Money
Where the Black Swans Hide and the Best 10 Days Myth

Further Reading:
Volatility is Not Your Enemy