I was driving this week and saw a huge sign in front of McDonald’s advertising jobs starting at $15/hour.

Just down the road was a sign in front of Burger King offering the same $15/hour wages.

Not to be outdone, the Taco Bell in-between the two burger joints was promising not only $15/hour but daily pay.

Why are these companies finally increasing their wages?

They have no choice.

There are currently more than 10 million job openings in the United States, the highest number on record. 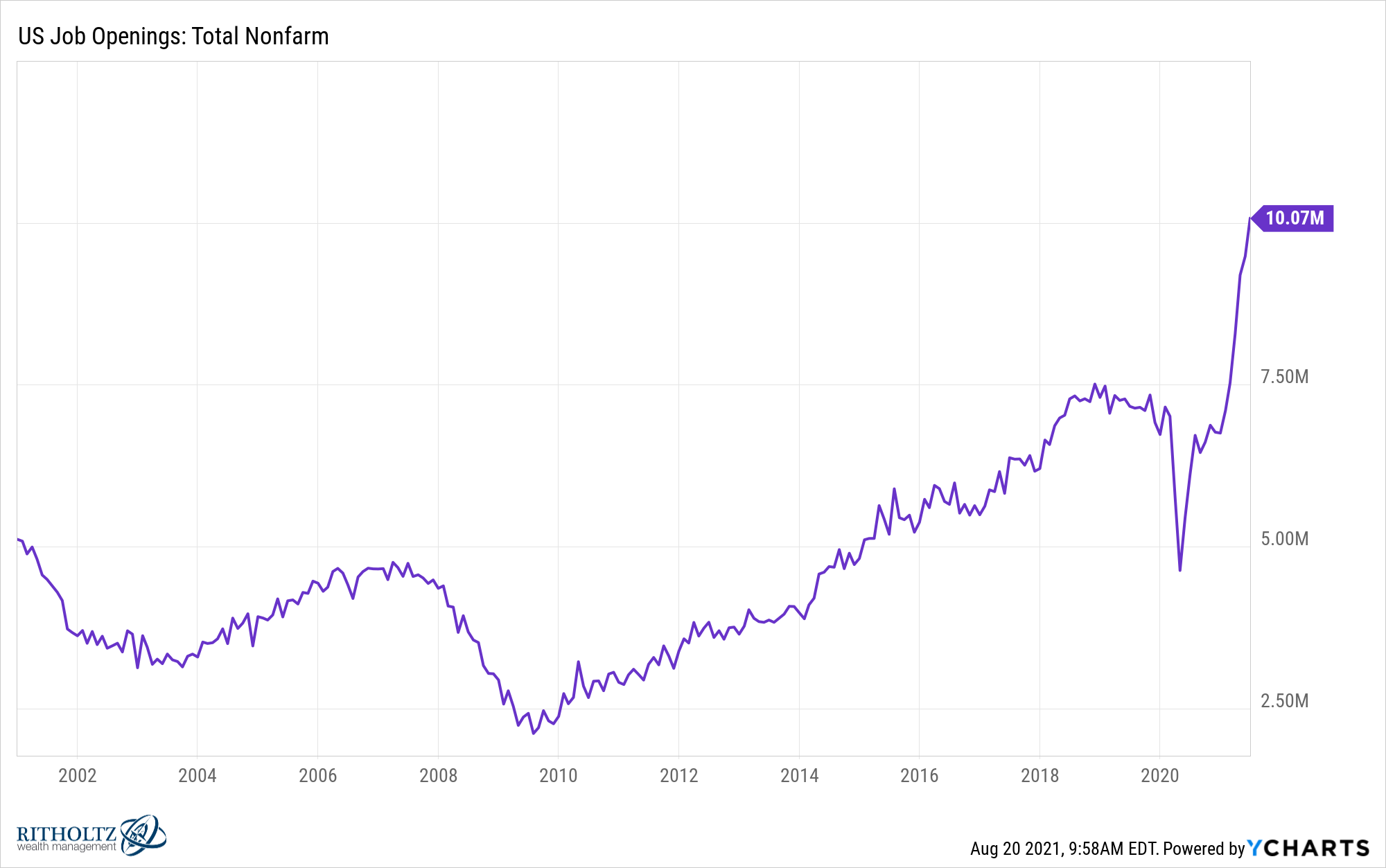 In contrast, there are roughly 8.7 million people who are currently unemployed. There are more jobs available right now than people looking for jobs.

There are a number of reasons for this.

More than 2.5 million people have retired since the start of the pandemic. That’s 1.2 million more people than we would have expected based on historical trends. Basically, the pandemic either forced people to retire early for health or job reasons or people simply decided life is too short and it’s time to retire.

There is also a record number of people quitting their jobs at the moment: 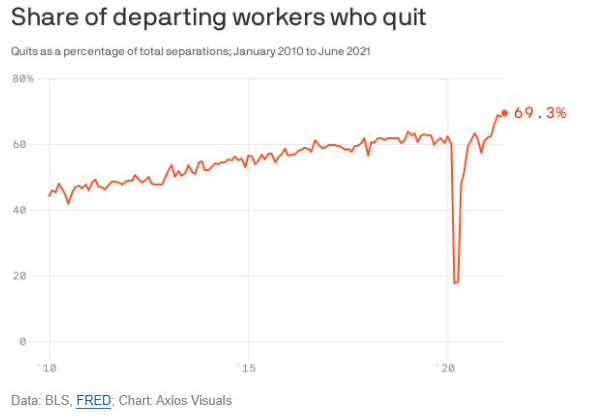 People’s finances are in a better place right now than they’ve ever been. Workers now have more options to earn better money elsewhere. And many people are reassessing their career choices in light of the pandemic.

So despite a 5.4% unemployment rate, people are willingly leaving their jobs. This is a good sign for the economy but also makes life difficult for hiring managers.

The boost in unemployment insurance is certainly playing a role as well but that is scheduled to drop off next month.

Much of this bottleneck will get sorted out over time. People will be forced to go back to work now that no more checks are coming from the government and savings can only last so long.

But it’s also possible we’re seeing a huge shift in the bargaining power of labor that we haven’t seen over the past 3-4 decades.

On Odd Lots last month, Tracy and Joe interviewed the CFO of Omni Hotel & Resorts. He discussed how the company is being forced to get more flexible with both hours and pay to attract and retain talent:

I don’t like an eight hour shift. I like the three or four hour shift. And so we’re having a lot of conversations around how can we kind of break that typical eight hour shift down. And so if you want to work from eight to 11, we can utilize you, if you want to work from two to five, come on. You know? And so I think the breakdown of this conventional kind of work week is upon us. And Tracy, to your kind of intro question has behavior changed? In my opinion, that is a secular shift that is here to stay. You know, you kind of put on top of that, the gig economy and with Uber or Instacart, I can get paid the day after I work. At Omni, right now we have 26 pay periods in a year. And so you’re getting paid every other week.

The daily pay concept is an interesting one that is probably here to stay for many jobs and companies. I like the idea. Maybe this can put the payday loan companies out of business.

Not only are companies increasing their wages for lower-income earners, but many corporations are also beginning to offer better benefits. McDonald’s and Walmart both recently announced they will be reimbursing employees 100% for the cost of college.

Just look at how much cash corporations have sitting on their balance sheets right now: 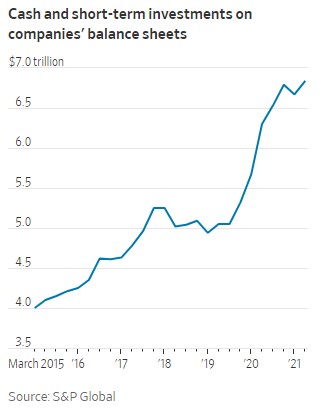 Eventually these corporations will adapt and put some of this money to work.

I have yet to see a single fast food dining room open in the state of Michigan (even though they could). Why won’t we see a deluge of new drive-through-only restaurants?

Taco Bell just released this rendering of a 4-lane drive-through only restaurant that is slated to show up next year: 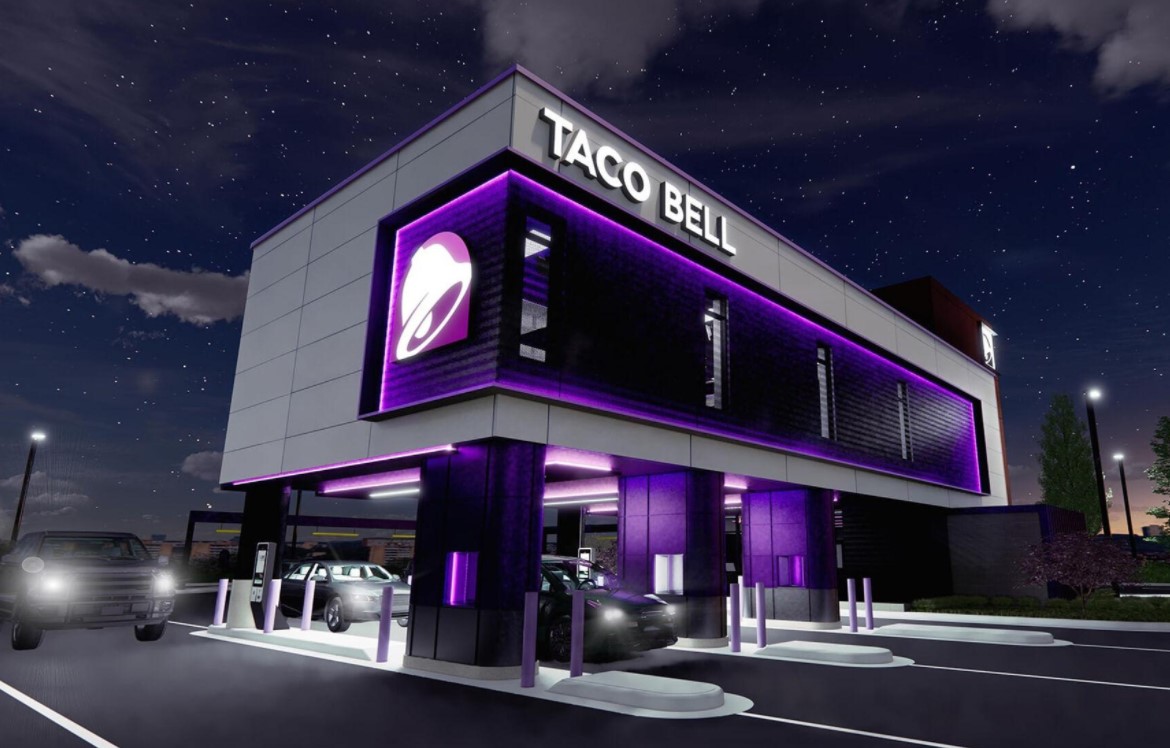 You certainly don’t need as many employees for this type of operation.

I was at a bar last week where the outdoor seating has doubled yet the staff remained the same size. To become more efficient they switched all of their ordering to QR-coded menus. So you just order your food and drinks, someone runs it out to you and then you pay at your convenience on your smartphone.

As someone who has impatient little ones, this innovation is wonderful.

It was so simple and way faster than the old way of doing things. The restaurants that continue to utilize technology to become more efficient won’t need to worry about labor shortages nearly as much.

Which brings us to the biggest economic question of the day — what does this all mean for inflation?

James Montier at GMO wrote a long piece on the causes of inflation last week. Here’s the kicker:

Inflation is often a poorly understood concept, with monotheistic explanations abounding. History teaches us that inflation is frequently more complex than such explanations allow. However, inflation is, as Wicksell put it, a “cumulative process” in that it involves a feedback loop between prices and costs. Labour costs are particularly important in the production process, and thus a sustained inflation requires wages to rise significantly faster than productivity (as we have noted before, we have actually been witnessing the opposite situation for a long period of time now – a phenomenon known as wage repression). Without a radical shift in labour’s bargaining power (for which we see no sign), it is unlikely that inflation will be able to embed itself in the system.

Basically, if higher than average inflation is here to stay, then wages have to keep rising. Montier is skeptical they can. I tend to think a lot of these increases are here to stay but it’s possible it’s just in certain parts of the economy.

So who wins — corporations or labor?

That is the billion-dollar question.

Michael and I discussed Montier’s piece and much more on this week’s Animal Spirits video: