The investing cycle of good ideas goes something like this:

Early adopters find an anomaly and exploit it for huge gains. More and more smart money begins to figure out this apparent loophole and competition means lower profits to go around. Next come the academics with their research papers that get published in the trade journals and such. Finally, Wall Street picks up on the trend and does their part to create more products than are needed to help everyone else finally jump in on the fad, usually just as the cycle is about to turn.

The holy grail of portfolio diversification: an asset class that provides long-term risk-adjusted returns similar to equities but is negatively correlated with the returns of stocks and bonds. That is what professors Gary Gorton and Geert Rouwenhorst (hereafter G&R) appeared to have identified in their seminal study, “Facts and Fantasies about Commodity Futures”1.

The paper looked at the period from July 1959 through December 2004 and concluded that the risk premium earned from investing in a broadly diversified basket of fully collateralized commodity futures is very similar to the historical equity risk premium. Moreover, the authors found that the volatility of commodity futures (as measured by standard deviation) was less than that of stocks. According to the study, not only were these superior risk-adjusted returns negatively correlated with stocks and bonds, but they were also positively correlated with unexpected inflation.

This paper coincided with the start of an enormous rally in commodities, which made for a perfect narrative for investors who had been burned by the dot-com crash in stocks. In the markets if something sounds too good to be true, it probably is, as investors in commodities products have figured out in recent years.

Gabriel next goes through a detailed explanation as to why commodities haven’t lived up to their billing as they were described in the research. Depending on the vehicle you’re looking at, a basket of commodities are down anywhere from 40-50% over the past five years. You’ll have to read his entire piece to fully grasp how things have changed in the commodities futures markets, but here’s the kicker:

Over the past 15 years, an allocation to commodities has generally resulted in lower returns and greater risk. Whereas G&R’s influential academic research was based on a period characterized by positive roll yields and high collateral returns, the situation today is much different. Roll yields have turned sharply negative in recent years, and collateral returns are basically nil thanks to near-zero interest rates. Further, rising correlations over the past several years have damped the potential diversification benefits. As a result, barring a return to a persistent state of “normal backwardation,” commodity futures may not be as attractive an asset class as it was once thought to be.

Commodities will almost certainly get to the point where they have an enormous snap-back rally. It’s a boom-bust type of investment. The point here is not to necessarily disparage commodities as an asset class. Some people still like them for their correlation benefits, warts and all. To each their own.

The point is that there are certain times when we see a regime shift in the markets that makes historical numbers irrelevant to a certain extent.

In the early 1900s, stocks used to pay much higher dividend yields than they do today. Part of the reason for this is because they didn’t really buyback their own shares back then. But stocks were not as widely owned as they are today, so to entice equity investors, corporations generally paid out a high dividend yield. In fact, stocks almost always yielded more than bonds. This was such a widely held belief that it turned into something of a market timing signal whenever the two yields would converge. 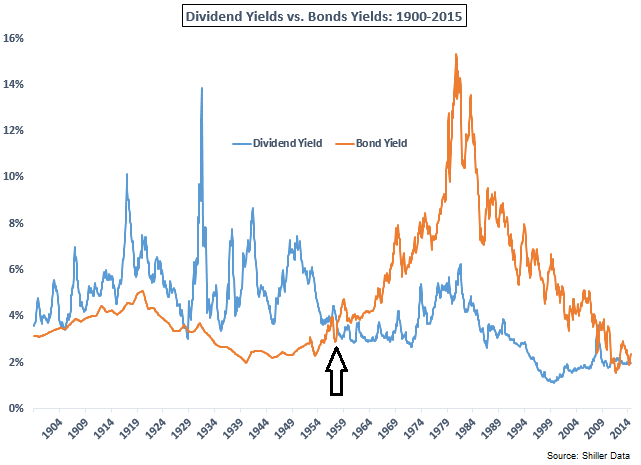 When dividend yields dropped below bond yields it was time to get out of stocks, after they had risen enough to lower their payout. This worked…until it stopped working. You can see where bond yields crossed stock yields in the late-1950s and never looked back (until recently). Had you continued to use that historical signal and waited to get back into stocks you would have been sitting out for decades and decades.

That’s where the real money is made in this business.

Further Reading:
Are Commodities For Trading or Investing?