Bonds gave investors a total return of more than 100% in the 1990s. All anyone ever talks about is the 1994 crash when interest rates spiked.

Emerging market stocks were up 185% in the 1990s. Yet we continue to hear people predicting a repeat of the 1997 emerging market currency crisis.

The 1990s tech boom added enough fiber-optic cable to make all of our wildest Internet dreams come true. All anyone ever talks about is the NASDAQ crash or maybe Pets.com.

Stocks are up over 200% since March of 2009. Instead of celebrating those gains, investors are constantly worried about missing the next 5-10% correction.

It’s very easy to dwell on the bad times because that’s when the majority of investors make their worst mistakes. Loss aversion is a well-known behavior trait by now, but just because we know that losses hurt much more than gains feel good doesn’t mean we can all of the sudden change our mental or physical make-up.

Studies have shown that losses are processed in the same part of the brain that responds to mortal danger. And it’s true that some people can even relive losses in their sleep.

This is why it’s rare that anyone ever paints market losses as a good thing in terms of providing opportunities. Instead, in the headlines we see words like plunge, turmoil, plummet, disaster and destroyed.

The panic feeds on itself and people start believing the hype. So people inevitably make mistakes, throw their plan out the window and become traumatized by market corrections and crashes. These periods become seared into the memories of investors even though they’re a natural part of the ebb and flow of market cycles.

Since 1980 the S&P 500 has fallen double digits just eleven times (I’m using Yardeni’s data here). That’s once every three years or so. I’ll bet you thought it was much more than that, what with the recent spate of market crashes since the turn of the century.

On average, stocks fell 26% and these periods lasted a total of just over 260 days before bottoming out (the median values were -19% and 104 days, respectively). If you were to take the data back to the 1930s there were double-digit losses ever other year or so. 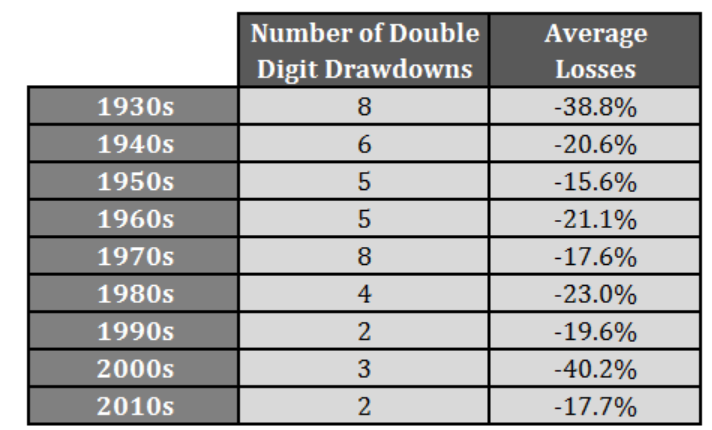 Double-digit losses and bear markets are the rule, not the exception. The 1990s was the only decade that didn’t see at least one 20% pullback (and both were very close to that mythical bear market definition that everyone pays attention to for some reason).

In some ways maybe it’s a good thing that the memories of past market crashes stay with us for so long. Although more crashes are guaranteed to continue into the future, it’s possible the sting from the previous losses can help keep investor emotions from getting too far out of control again so quickly.

And the hope is that investors learn about themselves and their behavior during turbulent markets. But I think investors and the media can take their fixation on “abnormal” market events too far.

Crashes, corrections, drawdowns, losses, system resets or whatever you want to call them are a feature of the financial markets, not a sign that they are broken. These things have to happen every once and a while for the system to function properly and wash out the excesses.

It makes sense to learn from them and you definitely have to mentally prepare yourself for dealing with losses. But the infatuation with down markets can be taken too far when loss aversion begins to cloud your judgment.

Further Reading:
Who Would Benefit From a Stock Market Correction
How to Preserve Capital During a Bear Market