Let’s do a quick rundown of some of the biggest worries for investors at the moment (in no particular order):

This is not an exhaustive list but even if I missed a few things there is plenty to worry about right now.

I could try to go through this list to provide data and context and opinions on each variable here but that’s not going to do much good since the only variable that matters — the future — is unknowable.

And even if I had the ability to give you the headlines in the future, you probably still wouldn’t be able to make much money on those headlines. No one could have predicted the stock market would rise more than 50% in 2020 and 2021 despite the onset of the worst pandemic in 100 years.

When the markets go haywire, you really have 3 options on what to do with your portfolio:

Trying harder and doing more typically leads to better results in many aspects of your life. Study harder and you can get better grades. Put in more practice and you can improve at sports. Go to the gym on a regular basis and you can transform your body.

Often times the harder you try and the more you do, the worse your results. It’s counterintuitive but true.

And doing more is often even more damaging when it’s done at the worst possible times.

There is this desire to be a hero when markets get volatile. There are people who want to pick the perfect hedge, nail the bottom, sell the rips to buy the dips and so on.

Corrections and bottoms look so easy in hindsight but it’s impossible to predict them in real-time. When markets are going down, human nature takes the wheel while fundamentals are tied up in the trunk.

And when human nature takes the wheel it becomes much easier to make mistakes. Minimizing mistakes is how you win during a market correction.

In his classic book, Winning the Loser’s Game, Charley Ellis gives one of my all-time favorite investment analogies:

In expert tennis the ultimate outcome is determined by the actions of the winner. Professional tennis players stroke the ball hard with laserlike precision through long and often exciting rallies until one player is able to drive the ball just out of the reach or force the other player to make an error. These splendid players seldom make mistakes.

Amateur tennis is almost entirely different. The outcome is determined by the loser. Here’s how. Brilliant shots, long and exciting rallies, and seemingly miraculous recoveries are few and far between. The ball is too often hit into the net or out of bounds, and double faults at service are not uncommon. Instead of trying to add power to our serve or hit closer to the line to win, we should concentrate on consistently getting the ball back. Amateurs seldom beat their opponents but instead beat themselves. The victor in this game of tennis gets a higher score because the opponent is losing even more points.

The best tennis players in the world hit winners while the rest of us hit it into the net.

The biggest difference between tennis and investing is you’ll never make it onto the same court as Roger Federer or Serena Williams but every investor plays on the same surface (the market).

I’m going to let you in on a little secret — most professional investors would be better off taking an amateur approach to investing. Yes, there are intelligent investors who can and do hit those winners but not on a consistent basis and it’s certainly a group that’s shrinking over time.

The other 99% of us are better off avoiding mistakes by making a bone-headed move at the wrong time.

These are some of the biggest mistakes investors make during a correction:

I know this isn’t the sexiest way to invest but for the vast majority of the population it offers the highest probability of success.

I enjoy Ellis’s book so much that I use another concept of his when I give presentations. He says there are truly only 3 ways to win the game of investing, each exhausting in their own way: 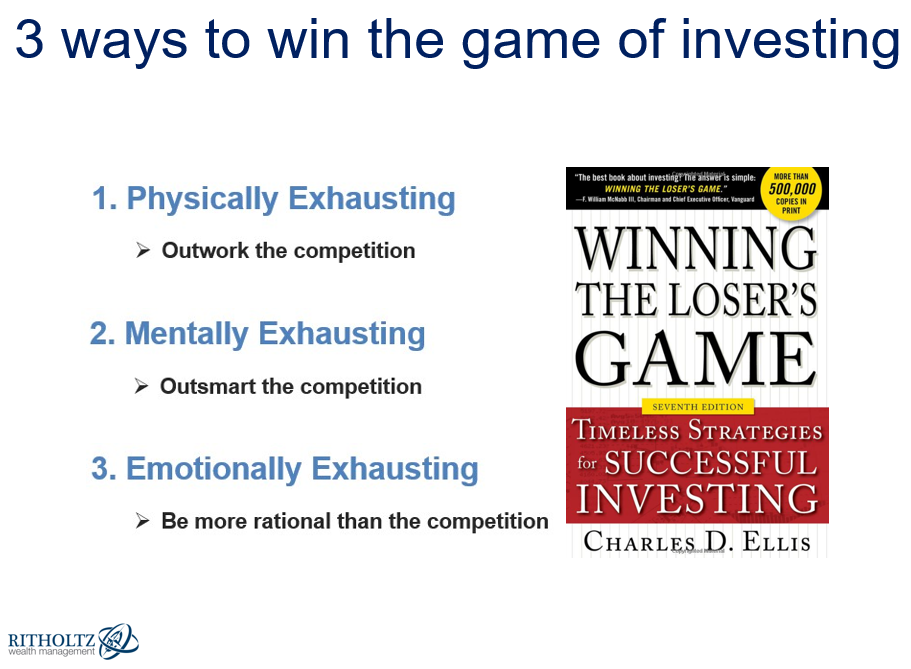 I already spoke about the problem with number one — working harder doesn’t automatically lead to better results in the market and in fact it often makes your performance even worse.

The problem with number two is there will always be someone smarter than you investing in the markets. There are hedge funds full of PhDs, rocket scientists and quants armed with the best data, technology and brains in the business.1

That leaves number three — being more rational than the competition.

Being more rational requires the use of a long-term mindset. It requires patience, discipline and the ability to ignore short-term fluctuations in the market.

It’s not easy but it remains your best bet for surviving the inevitable market corrections.

Further Reading:
This is Normal

1And most of these funds still fail to beat a simple index fund.