“There are few corners of the investment business where reversion to the mean does not hold sway.” – Michael Mauboussin

Investors are constantly searching for reasons to explain the movements in the financial markets. When no concrete reasons exist we construct narratives to create a feeling of comfort for making certain investment decisions.

The problem is that many times these narratives are simply an excuse to chase past performance and hop on the bandwagon of a hot investment trend.

Howard Marks, as usual, has a great take on this subject:

Nothing goes in one direction forever. Trees don’t grow to the sky. Few things go to zero. And there’s little that’s as dangerous for investor health as insistence on extrapolating today’s events into the future.

Extrapolation is what gets most investors into trouble.

The financial media can play a role in shaping this behavior and can often act as a contrary indicator. The most infamous headline indicator of all-time was from Business Week’s The Death of Equities piece in 1979 that came out just before one of the most massive bull markets of all-time. 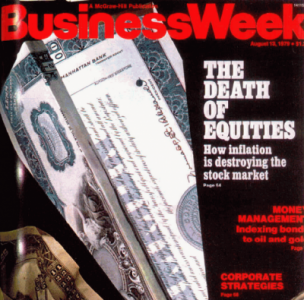 These indicators are by no means a signal because you can start to look for them everywhere, but they can provide anecdotal evidence when everyone is jumping on the same theme at once.

Here are some more recent examples of headline indicators.

The Headline: Gold-Dispensing ATMS: Coming to a City Near You (June 2010)

Gold was up almost 18% a year in the ten years leading up to this headline. Well-known gold bugs weren’t batting an eye as they threw out price targets of $5,000-10,000 an ounce. Everyone wanted to add gold to their portfolios because it looked great in the rearview mirror.

Enter mean reversion. Here’s the performance of gold since this headline appeared:

The Headline: ‘Fragile Five’ is the Latest Club of Emerging Nations in Turmoil (January 2014)

One of my rules of thumb in the investment world is that once something gets a nickname attached to it (think Nifty Fifty, BRICs, PIIGS, etc.) there’s a good chance it’s going to perform very well or very poorly from that point on depending on how it’s framed.

Case in point is the ‘Fragile Five’ emerging market countries of Turkey, Brazil, India, South Africa and Indonesia.  The worry was the Fed cutting back on their bond buying purchases was going to destroy these countries with inflation. Investors were dumping the stocks of these countries first and asking questions later.

Here are the stock returns since the Fragile Five nickname really took off:

The Headline: How to Invest as interest Rates Rise (January 2014)

In early 2014 a Bloomberg survey of 67 economists showed that all 67 of them thought that interest rates would rise this year. Instead rates have continued their slide leading to stellar performance in bonds this year, especially longer-dated treasuries:

The goal here is not to point out the mistakes of these headlines, but to show that things are not always as dire or rosy as they may appear. No investment opportunity is so bad that the right price can’t make it attractive and vice versa.

This doesn’t mean you can always be a contrarian because markets do tend to trend. It’s just that extrapolating recent gains into the infinite future is a bad idea. Markets tend to make investors look foolish when everyone’s on the same page.

Now for the best of what I’ve been reading lately: