“This is one of the most important rules of investing. If you never peek from the age of 20 to the age of 70, you’ll rip that first 401(k) statement open at age 70, and I recommend you have a doctor on hand because you’ll go into a dead faint. Your heart might even stop. You’re going to have an amount of money you can’t even imagine.” – John Bogle

I spend plenty of time writing about bad investor behavior and controlling unforced errors to improve portfolio performance. Everyone makes mistakes with their investments, myself included, so it makes sense to focus on utilizing an addition by subtraction method.

So it’s only fair to point out good investor behavior when I come across it. A recent Vanguard study restored my faith in investor behavior. Vanguard looked at a number of statistics for over 3 million participants in their 401(k) retirement plans for a study called How America Saves 2014.

A few stats from the report caught my eye.  The first was the 5 year performance numbers: 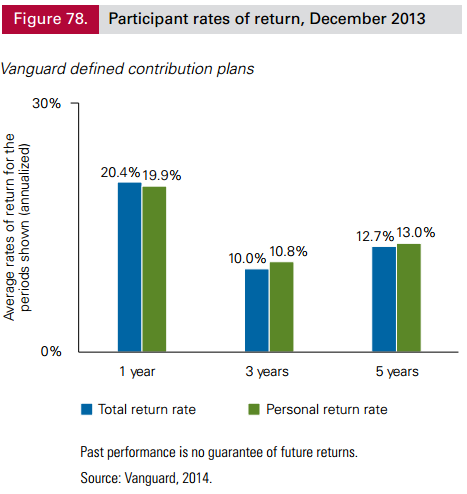 The performance on a simple 60/40 portfolio made up of the total stock market and total bond market funds was 13.1% per year over the 5 years ending in 2013, nearly identical to the plan results from this study.  These numbers are pretty decent when you consider the usual studies on actual investor returns.

Could investors have done better than thee numbers in other vehicles? Of course. But could they have done much much worse? Definitely and many investors did perform much worse than this 60/40 portfolio, including some of the largest professionally managed funds.

Next, the majority of Vanguard investors didn’t make any changes to their portfolio in 2013, a wise move in a market that exploded higher (emphasis mine):

Obviously, as I’ve said before, it’s much easier to be a long-term investor in a bull market.  But in the last period of substantial market volatility in the summer of 2011 during the European debt crisis when the S&P 500 lost nearly 20% Vanguard investors didn’t panic (the correct move in hindsight). This comes from a previous study:

Finally, the last stat that I found interesting from this report was the fact that a large number of investors mostly ignore their portfolio balances even though they have the option of checking them online on a daily basis:

In 2013, 40% of plan participants never contacted Vanguard regarding their plan account. […] For participants who did not contact Vanguard, their sole method for reviewing plan balances was quarterly account statements.

This seems like an antiquated form of doing business in the information age of being able to access everything anytime we want it, but it seems to be working.

Vanguard is pegged by most in the industry as strictly an index fund provider, but interestingly enough they have more active funds in their line-up than index funds (52% active versus 48% indexed – I don’t have the breakdown for these numbers by assets, this is simply the number of funds).

So it’s not just index fund investing that Vanguard does well. It’s low cost, low activity investing that’s beneficial to long-term investors that mainly act passively.  Of course costs don’t matter at all if you don’t behave, but it appears Vanguard’s investors have found a way to minimize both costs and mistakes.

Summing it all up, here are the lessons we can learn from Vanguard investors: