“Some men think that rules should be made of cast iron; I believe they should be made of rubber, so they can be stretched to fit any particular case and then spring back into shape again. The really important part of a rule is the exception to it.” – Paul Graham

Stocks and bonds are both in positive territory this year. This has led some to believe that something has to give.  Bonds are trying to tell us something.

Some people have a misunderstanding of the correlation between stocks and bonds. They aren’t perfectly negatively correlated, which would mean one rises when the other falls. Stocks and bonds have close to a zero correlation historically, which means there is basically no relationship in their movements.

So they can rise together, fall together or move in opposite directions with no real pattern. In fact, on average, they have risen together more than anything: 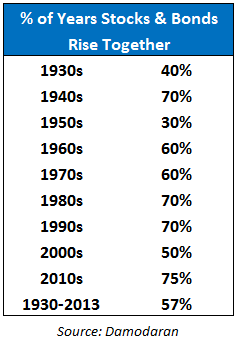 I decided to break this down a little further and see if the relationship held on a quarterly basis as well.  I looked at the quarterly performance for the S&P 500 along with the Barclays Aggregate Bond Index going back to 1976 . Interestingly enough, I got the exact same number — 57% of all quarters showed positive returns for both stocks and bonds during the same quarter.