“I remember the $0.05 hamburger and a $0.40-per-hour minimum wage, so I’ve seen a tremendous amount of inflation in my lifetime. Did it ruin the investment climate? I think not.” – Charlie Munger

For some reason there are always people out there in the investment world that feel the need to try to poke holes in the theory that investing in stocks for the long-term is a good strategy.

Yet rarely, if ever, do these people offer you a better solution. Sometimes I get the feeling that they just want you to say, ‘OK, you’re right. I give up. No more investing for the future. We’re all screwed.’

Here’s one I’ve seen more than a few times in the past few months:

Historical stock returns don’t look quite as great after accounting for inflation.

Here’s a scary looking chart from a recent Forbes article where the author was trying to make the case that Warren Buffett and John Bogle’s advice to buy and hold stocks doesn’t always work: 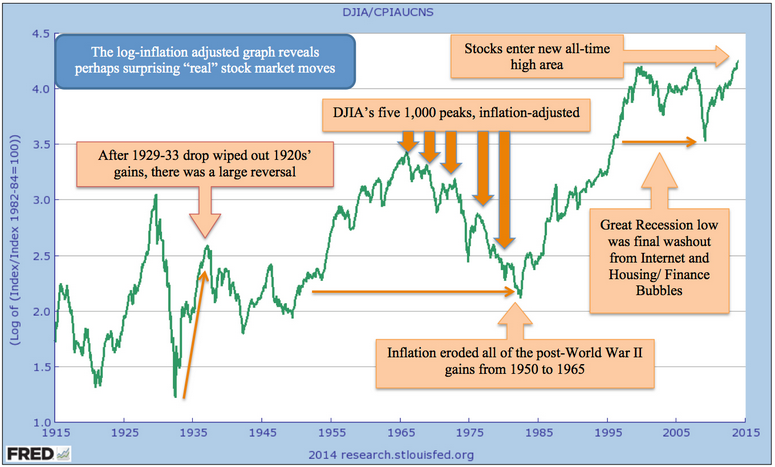 This graph shows the Dow Jones Industrial Average on a price graph after adjusting for inflation. The trend is still up but you can see that there are times when inflation really eats into stock prices.

Of course it’s true that if you invest a lump sum of money in the stock market right before inflation rears its ugly head or stocks have a bad stretch, then holding stocks isn’t going to look so great from that one point in time in that single index.

Luckily, in the real world people don’t invest that way. They make retirement contributions on a periodic basis in many different markets. Hopefully they also rebalance to take advantage of those times when the market does rise during times of subpar returns.

As far as inflation goes, I do think it is a very important concept for investors to understand. Inflation has huge implications for long run investment returns. But inflation doesn’t hurt the case for stocks as some would have you believe. It actually bolsters the argument for owning stocks over multi-decade periods.

There have only been two separate decades going back to the 1930s* where U.S. stocks had negative returns after inflation was taken into account. Here are those periods with the nominal returns, inflation rate and after-inflation returns (all number annualized):

The 1970s returns were definitely affected by sky-high inflation. Even though stocks returned almost 6% a year, inflation was over 7% so on a real basis you actually lost purchasing power.  It’s easy to blame inflation for the subpar real returns during the 70s, but stocks were also coming off of an impressive bull market in the 50s & 60s. The same was true of the poor returns in the 2000s that followed the super bull of the 80s & 90s and that decade saw fairly low inflation.

Periods of very high returns tend to be followed by periods of lower returns. Remember, stock returns are lumpy over shorter time frames. Yet they are still your best bet to beat inflation over the long-term.  Historical after-inflation stock performance has more than tripled real bond returns while cash is more or less breakeven with the inflation rate. Real estate hasn’t performed much better than cash.

Eric Nelson of Servo Wealth Management recently shared that the period from 1928-1970 saw relatively tame inflation at about 2% per year. Stocks returned 6.6% per year over inflation in that time. Then from 1971-2013 we saw inflation more than double the annual rate in the prior period, coming in at 4.2% per year. Yet the increase in prices didn’t affect real stock returns as they still gave investors 6.5% over inflation.

So after-inflation returns were basically the same over these two very different long-term periods.

Just as you can’t control the series of returns in the markets, you have no control over price levels. And predicting inflation is just as difficult as predicting short-term moves in the stock market. Just ask all of the people that have been forecasting hyperinflation for the past 5 years how that’s worked out.

You do control how much you save though. All was not lost during the 1970s period of rapidly rising prices. According to Federal Reserve data, wages grew 9.3% per year. Companies also grew their earnings during that period. S&P 500 earnings growth was 9.1% a year while dividends grew at 6.3% annually.

As long as you increase the percentage that you save from your paycheck each year you can be assured that you are controlling your lifestyle inflation, the only one that really matters to you.

Charlie Munger once said, “One of the great defenses if you’re worried about inflation is not to have a lot of silly needs in your life – if you don’t need a lot of material goods.”

*Stock returns were negative in the 1930s (-0.9% per year), but there was actually deflation in prices of -2.0% per year so real returns were positive after accounting for the change in price level.