“Too many investors cling to attribute-based approaches and wring their hands when the market doesn’t conform to what they think it should do.” – Michael Mauboussin

The biggest ongoing debate by the intellectual crowd at the moment is on profit margins. Pseudonymous blogger Jesse Livermore calls it ‘The epicenter of the valuation debate.’

In one corner we have those who claim that although corporate profit margins are much higher than past averages, it’s for good reason. Globalization, changes in the industry make-up and increases in technological efficiencies have led to a greater share of profits going to businesses as a result of a lower cost structure.

In the other corner we have those who claim profit margins always mean revert and earnings can’t continue to grow at their current pace forever through cost-cutting measures alone. The argument for profit margins trending back to their long-term average is based on the theory that as businesses start making large profits, the competition begins to enter the market which drives down profits for all of the players in that industry. It’s one of the basic tenets of econ 101.

Taking total corporate profits and dividing them by GDP gives you a basic measure of profit margins, which you can see in this chart: 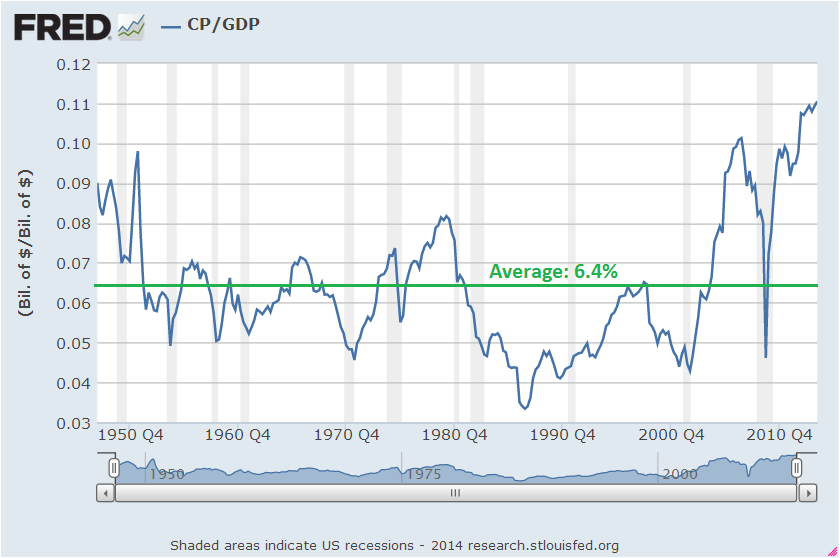 Margins are well above the long-term average going back to the late 1940s.  This has led many portfolio managers to become risk averse when it comes to stocks.  Some have been sounding the alarm for a few years now.

Unfortunately, predicting these kinds of long-term trends in the short-term is basically impossible.  I know I can’t time it with any precision, much less using a single variable, so I spend my time thinking about the long game: (1) What usually happens based on the historical evidence? (2) Where do we stand at the moment? And (3) What is likely to happen in the future?

(1) What usually happens based on the historical evidence?
Between 1948 and 2013 corporate profits grew at around 7% per year. But it was a bumpy ride and you can see that the margins on those profits were anything but stable.  They rise and fall every few years.

Using the corporate profit margin data from above, I went back and looked at the stock market performance during past margin contractions. Here’s what I found: 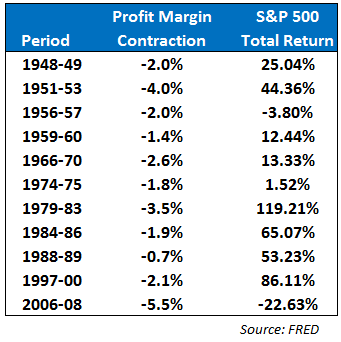 For the periods listed here I used the S&P 500 returns from the time margins peaked until they bottomed out.  The peak-to-trough losses for stocks throughout some of these periods were much larger than the final returns. But the next time someone is able to use falling profit margins to pick the precise top and bottom of the market will be the first time. These numbers show the full cycle from high to low in margins and how stocks did over those periods.

So actually stocks have done reasonably well in the face of declining profit margins in the past.  Out of the 11 periods of shown here stocks ended with negative performance only twice.

(2) Where do we stand at the moment?
The question remains how much does the market really care about profit margins?  This entire debate really centers around the market’s current valuation and where we stand in the cycle.

The 5 years annualized returns from 2009-13 were extraordinary, coming in at around 17.7% per year. That puts this period in the top 15% of all-time rolling 5 years returns. But the 10 year annual returns from 2004-13 of 7.3% per year are closer to the 70th percentile. So the 10 year numbers reside in the lowest 30% of returns going back eight decades or so.

Sort of a mixed bag based on those numbers, but of course all that matters is what happens going forward.

(3) What is likely to happen in the future?
Both parties are probably right in this case.  Margins are higher for a reason but eventually they will probably contract if history is any guide.

But I’ll be honest, I have no idea what’s going to happen. Stocks and profit margins have both had a nice rise lately and mean reversion is one of the strongest forces in finance. Yet just because something goes up doesn’t mean it has to immediately crash. Because it’s supposed to is not a valid reason for market moves.

Markets don’t exist in a vacuum.  They are based on the relative expectations of a large group of participants, each with their own agenda.  Even if margins or earnings fall, what matters is how the market perceives those declines, not what we think should happen.

If we see a recession, stocks and profit margins are both likely to fall.  If there is no recession for a number of years, I think stocks will end up doing okay.

Regardless of the reason, stocks can and do fall on a regular basis.  Prepare yourself for that possibility, whether it comes from falling profit margins or something else.