“It’s one of my first principles that we never know where we’re going – given the unreliability of macro forecasting – but we ought to know where we are.” – Howard Marks

Reader mailbag: I read your article about stock levels (New Round Numbers! What Does it All Mean?) and I’m curious how you could claim stocks are not currently in a bubble created by money printing from the Fed. It seems obvious that stocks are detached from the real economy and are only higher because of the actions of the Fed. Please explain further.

We’ve had two huge bubbles burst in this century alone, so it makes sense that everyone would try to call the next one. It’s impossible to ignore the events of the tech and debt bubbles since they are in our recent memory.

Now there seems to be a bubble in calling bubbles. It helps that those who called the last one were treated as rock stars by the financial media, even though many of them have been wrong ever since.

When I think of bubbles picture people going crazy about an investment or market. Everyone talks about it. It’s on magazine covers and the front page of the newspaper. They lead off the news with stories about regular people getting rich as amateurs start to think they are experts because prices continue to rise.

According to the most recent Gallup poll, only 52% of US adults own stocks, the lowest level since the poll started in 1999. When asked what the best long term investment is, only 22% responded stocks. Unfortunately, real estate came in at 25% while gold was at 24%.

Also, CNBC ratings are the lowest they’ve been in 20 years. During the tech bubble, CNBC was everywhere (although, I guess it helps that you can get stock quotes on your smartphone now).

Remember, 2008/09 wasn’t necessarily a stock market bubble. It was a global debt and liquidity bubble that caused a nasty recession which led to stocks getting crushed. Lending standards were lax. Everyone was getting loans. Real estate went bonkers. The debt deleveraging that followed was the problem, not necessarily stock valuations.

Markets overshot to the downside because it seemed like the world was coming to an end. That led to the snapback rally from the bottom in March of 2009. Here’s why people think we’re in a bubble: 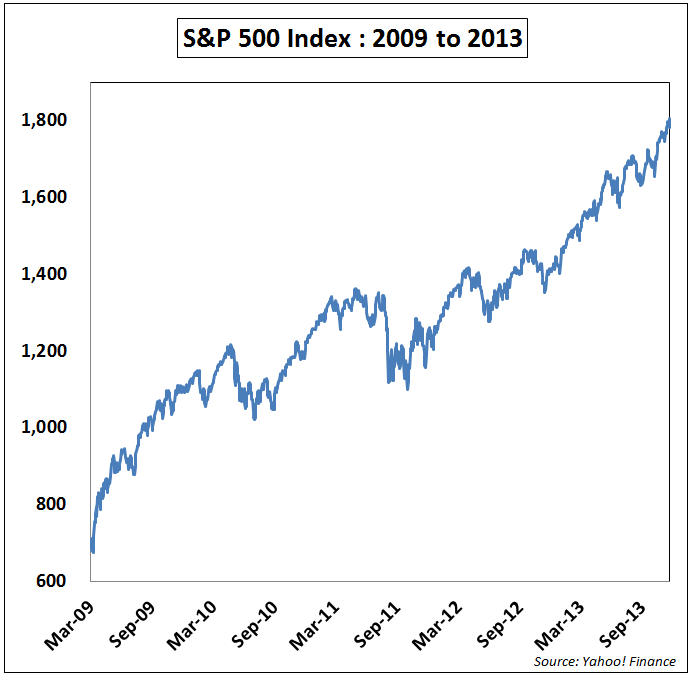 The end of the 1990s was definitely a stock market bubble. Valuations of technology companies and growth stocks were insanely high and unsustainable. The ensuing terrible returns in the market (especially for large cap stocks) came about because of these overvaluations.

Which led to this roller coaster ride: 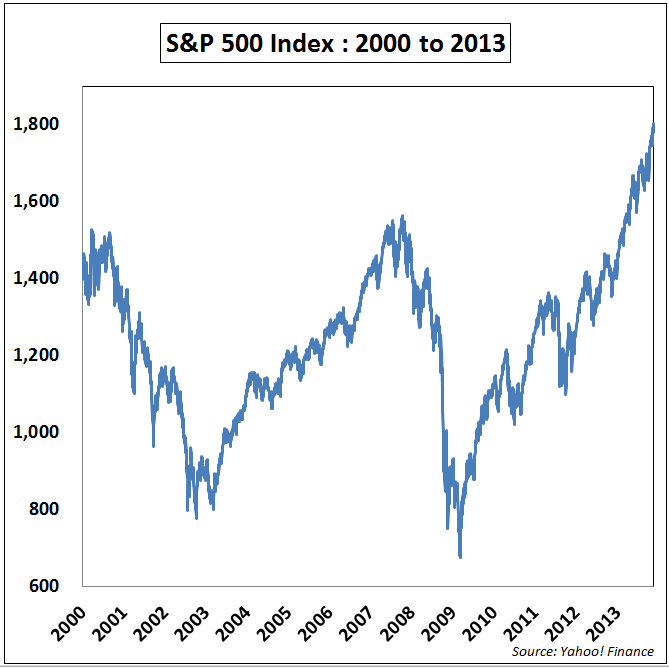 Looking at the first graph makes it seem like we’ve had an uninterrupted rise in stocks. Looking at the second graph shows things have been bumpy for a while.

Obviously, we can’t keep up the current pace of returns, but high returns don’t always lead to a crash.

In my latest newsletter (shameless plug – sign up for my newsletter) I noted to my subscribers how the S&P 500 has risen 20% or more in 31 of the past 85 calendar years or more than 35% of the time. It’s perfectly normal for stocks to go up by 20% or more.

That doesn’t mean it will continue, but it’s not out of the ordinary.

Falling 20% in a year isn’t out of the question either. Six times we’ve seen stocks fall 20% or more during a calendar year or just under 10% of the time. These things happen.

Stocks could definitely be overvalued, especially if the business cycle slows and we enter a recession which causes sales and earnings numbers to drop.

The question of the Fed is a bit trickier.  We are in unprecedented territory with their policies.  But no one knows what’s going to happen. If they tell you they do, they are either too sure of themselves or are simply lying.

For the past few years many experts claimed the Fed’s policies would surely lead to runaway inflation. In actuality, inflation is at its lowest levels in generations.

I don’t consider myself an expert on investment cycles, so I defer to those that are. Howard Marks has reached legendary status by following the ups and downs of the various cycles over his 40+ years of managing money.

Here are some of his recent thoughts on the state of the markets:

I believe most strongly that the riskiest thing in the investment world is the belief that there’s no risk.

Is this a sell signal? No, I don’t think it’s time to bail out of the markets. Prices and valuation parameters are higher than they were a few years ago, and risker behavior is observed. But what matters is the degree, and I don’t think it has reached the danger zone yet.

I think most asset classes are priced fully – in many cases on the high side of fair – but not as bubble-type highs.

Marks makes a great point about risk here. You can’t assume that because markets have continued to go up in price that there is no risk anymore. There is always risk, more so now that prices and valuations have risen.

So don’t chase things higher and move all of your money to US stocks because past returns have been so strong. But it doesn’t appear that we have hit bubble territory quite yet.

Continue to rebalance to lagging asset classes if you have large gains in US stocks. That’s one of the best risk controls investors have to use gains to buy value elsewhere.

As always, if you need to use your investment dollars within the next 3-5 years, you probably shouldn’t be in stocks with that spending money anyways.

In the meantime, stocks most certainly can and will fall. It just doesn’t necessarily have to be a huge crash as we’ve seen in the past.

Sources:
US stock ownership stays at record low (Gallup)
The Race is On (Howard Marks)

Further Reading:
The difference between a correction and a crash
The 1990s stock bubble was much crazier than people remember (Slate)
Talk of a stock market bubble is baloney (Servo Wealth Management)