“An investor should have an adequate idea of stock market history, in terms particularly of the major fluctuations. With this background he may be in a position to form some worthwhile judgment of the attractiveness or dangers…of the market.” – Benjamin Graham

Most investors focus on the large cap markets such as the S&P 500 and the Dow Jones Industrial Average. The financial media focuses on the largest markets and the largest companies within those markets.

Small and mid-sized companies don’t get as much attention from the investing community. Consider that, according to Fortune, the average small cap company has only two research analysts, compared with twelve for large cap companies. And almost 30% of small caps have no analyst coverage at all.

This allows smaller-sized companies to go much more unnoticed by Wall Street. They don’t pay attention until they start to see solid performance and growth and then they decide to jump in. So small and mid cap stocks have outperformed over the long term (they are also considered riskier investments than large caps, but that hasn’t stopped them from outperforming).

The Wilshire Small and Mid Cap Indexes have outperformed the Wilshire Large Cap Index by around 1.5% per year going back the their inception in 1979.

Other studies have shown small and mid cap dominance going back even further.

This has definitely been the case since the bottom of the market in March of 2009. This chart shows the returns of each market from March 9, 2009 until mid-November: 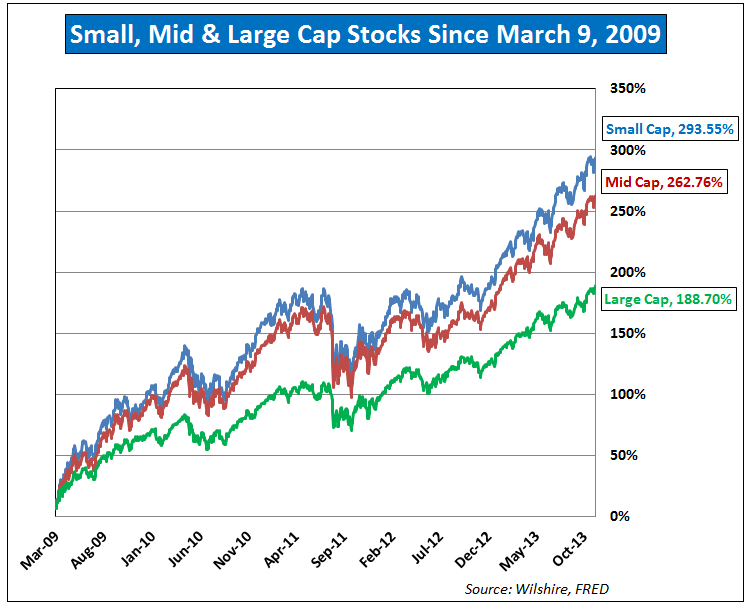 While large caps have performed well, up nearly 190%, small and mid caps have been crushing it, with both up nearly 300% since the bottom.

Since ’99, small and mid cap are both up over 9% a year while large cap stocks have delivered roughly 4.5% annual returns (It’s also crazy to me that during two of the biggest busts of all-time that small/mid stocks performed so well – as always, diversification wins out).

That’s why I’m becoming somewhat nervous about the continued outperformance of small and mid caps. They have been lights out and that cannot continue forever.

I’m not saying that you should sell all of your small and mid cap stocks (I’m definitely not doing that). But if you haven’t rebalanced and taken some gains in a while you could do worse than locking in nearly 25% a year over 5 years with part of your allocation to these markets.

It’s not easy to do this, but looking to deploy some of your gains in the less loved markets around the globe will probably be a good move in the long term.

It’s impossible to time these moves so a periodic rebalancing is the best way to keep yourself honest.

The relative outperformance could continue.  It’s impossible to predict when that will end.

Further Reading:
How to beat the market over 20 years
Why diversification works