“That’s just a straight shooter with upper management written all over him.” – Bob Slydell 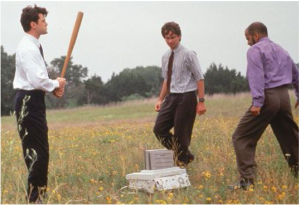 The following is a guest post by someone I go to for advice but wishes to remain anonymous as the AWOCS Mystery Contributor.  It’s a great take on money & happiness using one of my favorite movies from the 1990s. Enjoy.

Peter Gibbons: Our high school guidance counselor used to ask us what you’d do if you had a million dollars and you didn’t have to work. And invariably what you’d say was supposed to be your career. So, if you wanted to fix old cars then you’re supposed to be an auto mechanic.
Samir: So what did you say?
Peter Gibbons: I never had an answer. I guess that’s why I’m working at Initech.
Michael Bolton: No, you’re working at Initech because that question is bullsh*t to begin with. If everyone listened to her, there’d be no janitors, because no one would clean sh*t up if they had a million dollars.
Samir: You know what I would do if I had a million dollars? I would invest half of it in low risk mutual funds and then take the other half over to my friend Asadulah who works in securities…
Michael Bolton: Samir, you’re missing the point. The point of the exercise is that you’re supposed to figure out what you would want to do.

Regular readers of “AWOCS” may have been nodding their heads in agreement after reading Samir’s take on the $1 million dollar question in the above exchange from the classic movie Office Space. Bonus points if you were thinking that in no way could you start out in life with $1 million and never have to work.

Let’s frame the situation in a different light and take a look at what amount of money you would have to make on an annual basis to be “happy.” Peter would take seven figures and find happiness in doing nothing (A-Rod has found a way to do nothing this year and still get paid $28M).

But as Lawrence so eloquently put it, his cousin doesn’t need money to accomplish the same goal. We all know that there’s no such thing as a free ride in this world, so let’s take a look at what it takes to have a good ride instead.

$75k to Happiness?
There have been a number studies over the past few years that have tried to identify how much one would have to earn per year to be the “happiest”. Princeton University has identified $75,000 per year as the optimum happiness salary. The lower someone goes below $75,000 per year, the less happy they will be, but no matter how much more they make than $75,000, they don’t report a significant increase in happiness.

Other studies have pegged the happiness salary as $161,000, but regardless of where it falls between these two numbers, the moral of the story is that you don’t need to make anywhere close to $1 million per year to have the freedom to do what you want in life.

What’s special about $75,000? Well, let’s think about it from a budgetary standpoint. In most areas of the country $75,000 will allow someone the opportunity rent a nice place/purchase a decent house, pay for health insurance, buy a car, pay other bills, save a fair amount, and still have enough left over to enjoy life with all of the major bases covered.

Say you find someone that you like enough to marry and spend the rest of your life with…now you’re cooking if you have $75,000 a piece to contribute together. This will allow you to split the bills, pay for kids, take a few more trips, find more hobbies, have enough left over for an emergency fund, and still contribute a solid amount to your retirement accounts. A $75,000 salary allows one the opportunity to set a plan to have everything you could ever need, and control for the intangible events that happen in life.

Now, think about less income. The median US household income in 2011 was $50,502, so obviously most of the population doesn’t make close to $75,000 individually, let alone as an entire household. This means that while the bills get paid, the extras fall off the opportunity spectrum. Less money means a diminished ability to cover the inevitable issues of life.

Most people can’t enjoy the day-to day in life and set a long-term plan if they don’t have the income to buffer for issues like broken bones, car problems or leaky roofs, let alone little Billy’s college fund, retirement, or an emergency fund.

Thought, energy, and effort has to go into paying the bills that are right in front of them which means there’s more to worry about, and therefore less happiness in the rest of their lives.

More Money, More Problems
With greater salary comes greater responsibility, and with greater responsibility comes a much larger commitment of time, energy, and effort devoted to the job. Think about the opportunity costs of professional jobs these days that include being responsible for doing more with less, all at the same time keeping up with the frenetic pace of emails and the demands of a high-profile job. High pay means you’ll be working nights, working weekends, and thinking about work instead of enjoying your life outside of work.

In addition, as people make more money they start to want more of the finer things in life. If all of your co-workers drive Japanese luxury vehicles (in my mind a lot of people overpay to drive a luxury car to show everyone else how successful and intelligent they are when they’re not much more than the basic models with leather seats and a high price) then it starts creeping into your head that you need to fork over the extra payment amount to drive one too.

How about a vacation house or an Ivy League college for the kids? Or do you need to put in those extra hours because that’s what everyone else around you does, so you do it just to keep up with the flock, and barely keep your head above water with everything else in life.

Take a step back and consider the opportunity cost of the stress, late nights, and constantly looking over your shoulder to see if someone is trying to take your job. Then determine if it’s worth it to drive a Japanese luxury vehicle, or miss your kid’s sporting events, and pretty soon making a lot of money doesn’t always equate with greater happiness.

So what does this all mean? It’s all about setting priorities and being able to do what you want. Making too little money takes options off the table and increases worries about where the next dollar will come from. Making a lot of money is great if it doesn’t consume you with stress and the rat race pursuit of new and better things. Whatever the number is, appreciate what you have, enjoy your work, and find the ability and time to plan and chart your own course.