“We have an entire generation of investors who have never experienced a rising rate environment.” – Gary Cohn, Goldman Sachs

If you missed the first 5 parts in my series on bond investing be sure to read:

Changes in the interest rate environment have had a very large impact on bond returns over the long run.  In fact, if you look back at the historical returns on bonds over the years there is a direct correlation between interest rates and future bond returns.

Here is a recent chart from BlackRock that shows the returns of long-dated bonds by decade along with the corresponding average interest rates: 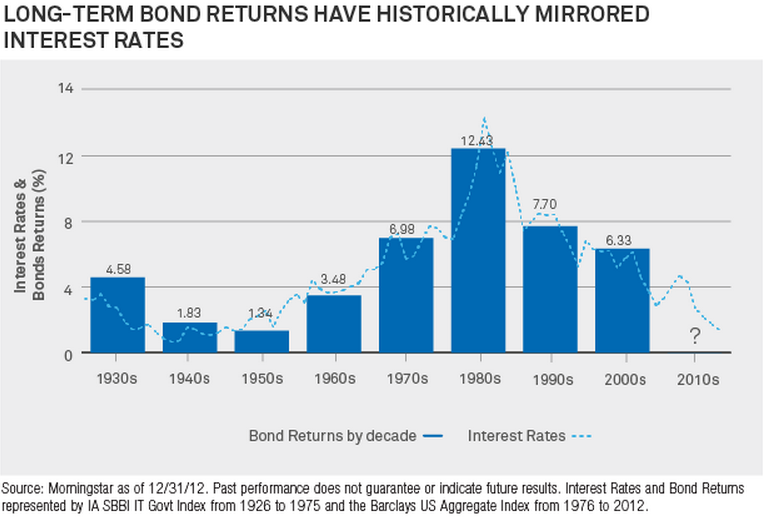 The fact that rates have been so low for so long, but are rising at the moment, has investors really nervous about interest rate risk.

Remember, bond prices and interest rates have an inverse relationship. As rates rise, bond prices fall and vice versa.  For example, if you hold a bond paying 5% interest and market rates rise to 6%, investors would need to pay less for your bond to be compensated for the lower than market rate.  So the value of your bond goes down.

Because interest rates have been on the decline for the past thirty plus years and can’t fall much further, investors have turned their attention to what happens when rates have a meaningful rise.

Investors are used to volatility in stocks.  In fact, for those with a long time horizon, volatility in stocks should be welcomed.  This is not the case for bond investors.  They look for stability and consistency.  Rising interest rates aren’t going to help with these desires.

And price volatility is actually higher at lower rates than it is with higher rates because you don’t have as large of an income stream to cushion the blow from the loss of principal.

Rates affect bond investments, but they also affect all other investments in some form or another because higher rates mean that investors have other options in which to invest (dividend and REIT investors know this all too well in the recent rate increase).

And rising rates affect not only our investments, but also our credit cards, car loans, mortgage loans and I could go on.

Interest rates are a very important factor in the economy for both individuals and businesses. It makes sense to keep an eye on them to see where they have been, where they are and possibly where they could be heading (although no one really knows this).

Here’s a very long-term graph of historical interest rates using the 10 Year U.S. Treasury (which is used as the main reference rate for most bonds and investments): 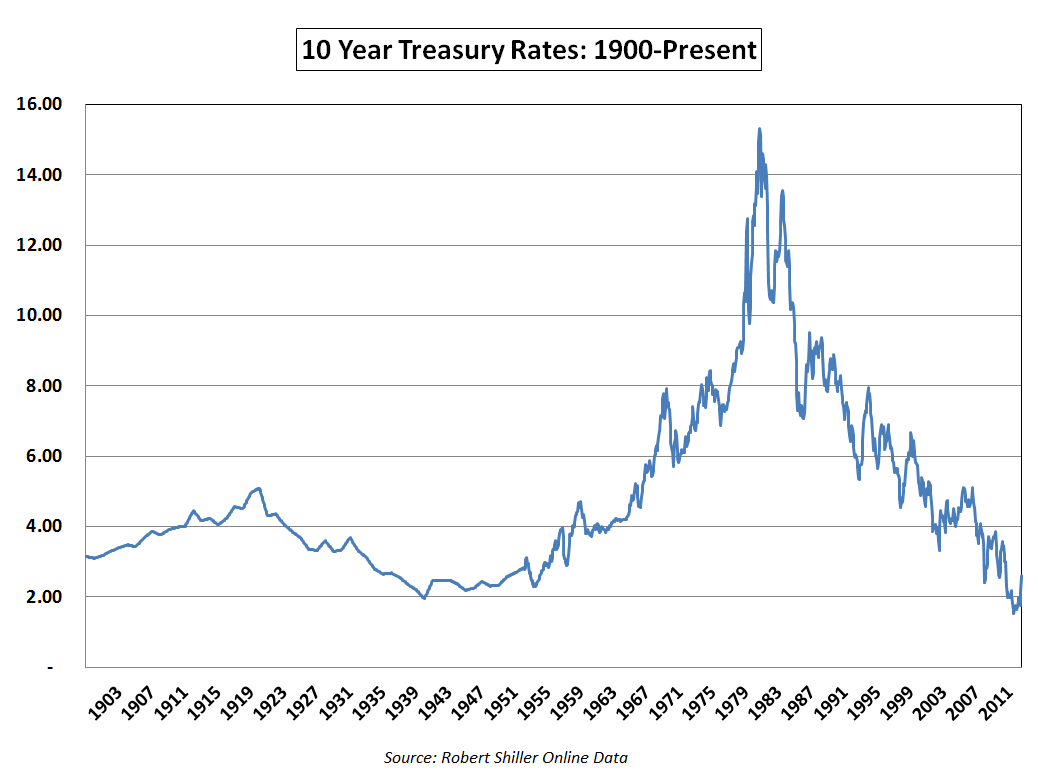 MATURITY RISK
You’ll notice a tiny blip all the way to the right of the graph. That’s the recent rise in interest rates. Rates went from around 1.6% to over 2.6% in the months of May and June.

Here’s the effect that rise in rates had on certain maturities in the bond market in May and June based on iShares ETFs:

The shorter the maturity of the bonds you own the lower your risk of price fluctuations. But you also get compensated with a lower interest rate, so like all investments, there is a balancing act between risk and reward.

RATES COULD RISE
Because of recent losses investors are becoming increasingly nervous about rising rates. At some point, rates will have to rise even further. Here I have highlighted the last sustained period of rising interest rates on the same historical interest rate chart below: 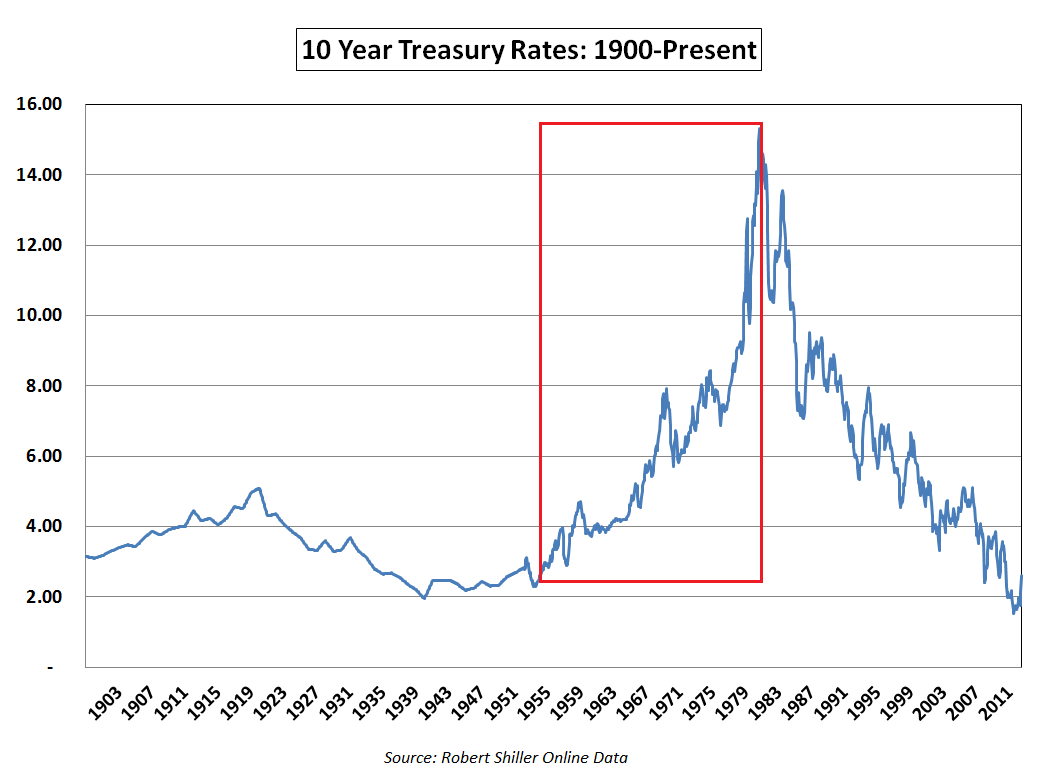 It would take an out of control inflation environment for this to happen again, but it’s not out of the question. Here’s how bonds fared in the 1950s-1970s period of rising rates:

You can see that returns weren’t great (by recent standards), but inflation was the real killer. Inflation hurts bond returns because your fixed interest payments aren’t worth as much going forward. It’s like a death by a thousand cuts as you slowly see your purchasing power get consumed by rising prices.

Of course another conundrum in today’s market is that rates have started to rise but inflation is sitting at a 50 year low. We live in an interesting investing environment for sure.

RANGE BOUND RATES
Just because rates will rise eventually, doesn’t mean it will happen in a uniform process. The market doesn’t always react how we predict or how we would like it to. The alternative to the rising rate environment we saw leading up to the 1980s is one in which rates don’t really go anywhere for a really long time.

Japan has experienced this for quite some time now. And it has actually happened in the U.S. in the past as well. Here I’ve highlighted another interest rate snapshot in time: 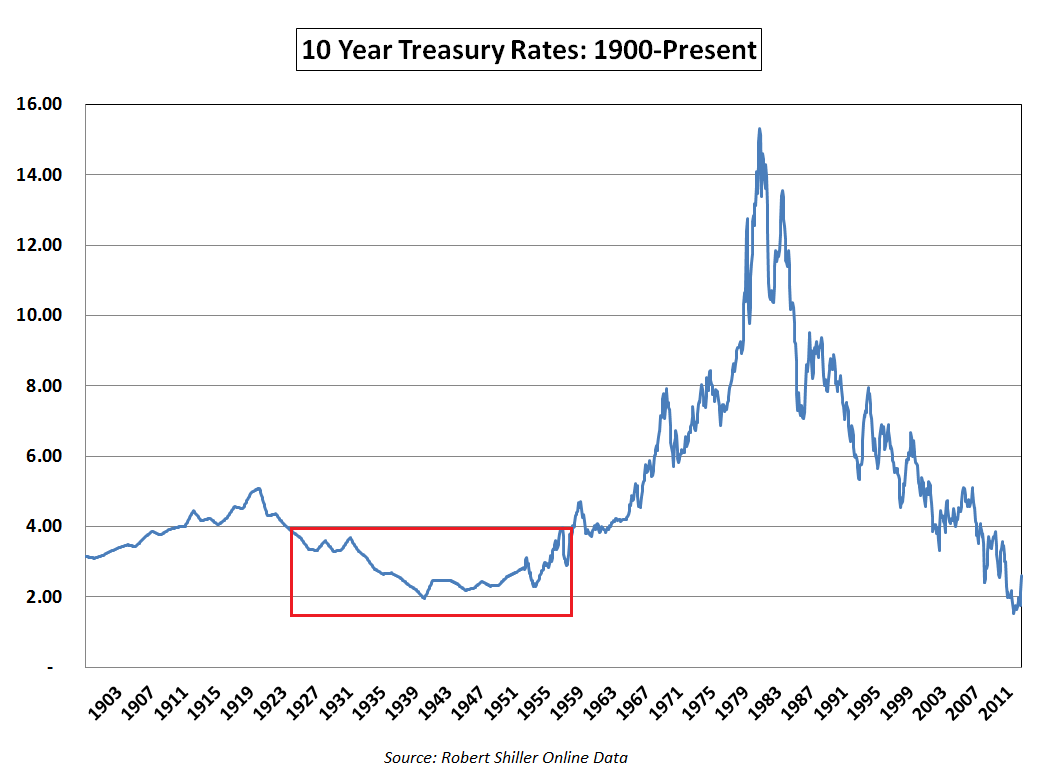 You can see that from the 1920s to the 1950s rates were basically range bound between 2% and 4%. There’s no reason this can’t happen again.

The Fed intends to keep short-term rates near zero as long as unemployment remains above 6.5% and inflation remains below 2.5% (but these could be moving targets). And about 60% of the debt issued by the Treasury comes due in the next couple of years.

Therefore, one can assume that the Fed would be OK about keeping rates low for the time being so they are not rolling it over at increasingly higher rates with higher debt payments.

The markets don’t always cooperate, but it is a possibility.

PREDICTING INTEREST RATES
Whatever the reason for rising interest rates, getting from here to there is the scary part because we haven’t experienced a sustained rising rate environment for a very long time. It’s another added uncertainty to an already uncertain investing world.

Predicting the future of interest rates is nearly impossible. And even if you could you might not know the reason that rates are rising so it will be hard to do anything about it.

Charlie Munger recently stated, “If you’re not confused, you don’t understand things very well,” when asked about the economy. So everyone is confused, including the really smart investors.

It’s possible we could see the interest rate environment play out as it has in the past by rising sharply or staying in a narrow band for some time to come. More than likely it will be a totally different scenario that investors aren’t even considering. It’s just too hard to make an educated guess with all of the moving pieces.

The point is that you should stay out of the interest rate forecasting game. It won’t help you and you can’t do it anyways, so there is no need to waste your time. Focus on what you can actually control.

It’s not easy to admit that we don’t have all of the answers, but that is especially true in this case. It’s actually a good thing to say, “I’m not sure what’s going to happen” when investing. It can keep you grounded.

If you are invested in bonds or bond funds, make sure that the objectives, maturity length, yield and credit ratings make sense for your particular goals and circumstances.

For most investors it probably doesn’t make sense to invest any further out than intermediate bonds or bond funds (10 year maximum maturity) to lower the risk of large losses. But you need to make that decision based on your risk profile and time horizon.

It seems counterintuitive, but if you are invested in short or intermediate bonds, you should actually welcome a rise in rates.  You lose principal in the short-term, but have the ability to reinvest at higher rates in the future.

A balanced approach to investing in bonds is probably the safest way to spread your interest rates risks and take advantage of changing rates since we won’t be able to predict how things will work out. That’s probably not the answer most investors are looking for but that’s why we utilize diversification. It means you don’t have to be right all of the time or know what the future holds.

That’s it for my six part series on investing in bonds. Hopefully you found it informative and helpful for your portfolio. Feel free to leave a comment or shoot me an email if you have any more questions on bonds.  Interest rates should make for an interesting subplot in an already complex investing world.