Earlier this week I took a look at how inflation has affected market returns over the years. As you can see from the chart below, inflation has historically run in excess of 4% one out of every three years while it has been 2% or higher two-thirds of the time:

The next logical question — which is one I received from a few different readers — is how to protect your portfolio against inflation. The majority of the usual suspects have been covered here and elsewhere — TIPS, commodities, precious metals equities and real estate to name a few. All of these different investments could protect investors from an inflationary environment, depending on how the cycle plays out.

But there are a couple other options that not too many investors think about when trying to plan for an unexpected rise in inflation or rates — value stocks and international stocks. Here is a graph showing the value factor (courtesy of the Fama-French database) over the decades set against the annual inflation rate: 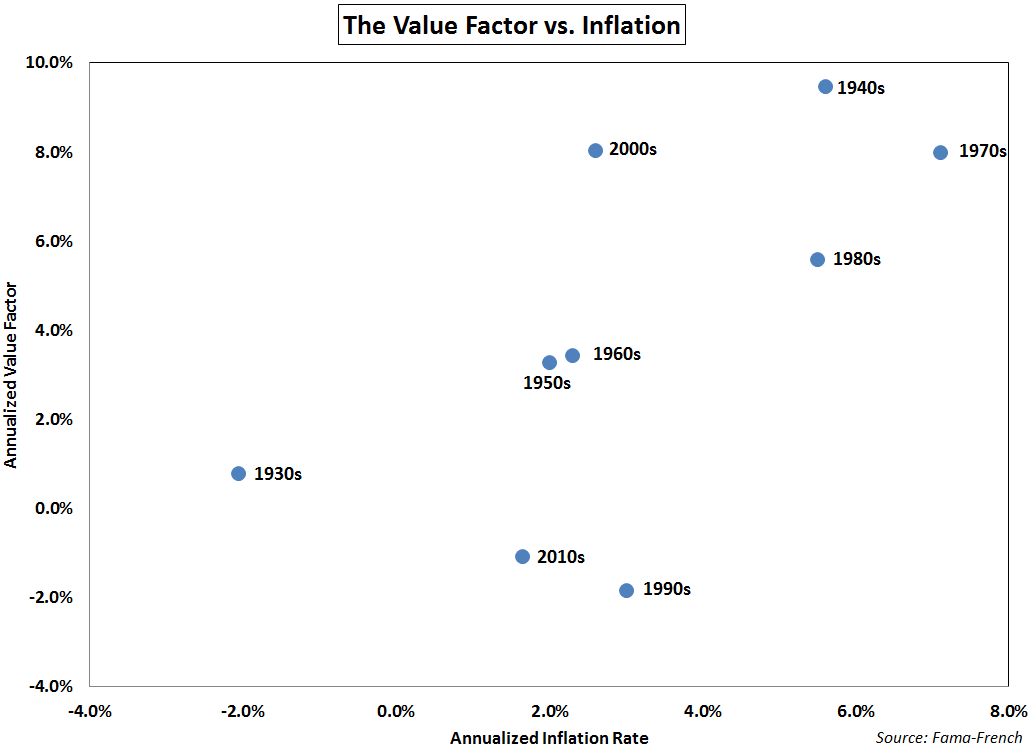 There’s not quite as much historical data, but I ran a similar graph on U.S. (S&P 500) vs. international (MSCI EAFE) stocks, showing the annual over or under-performance by foreign stocks over the decades: 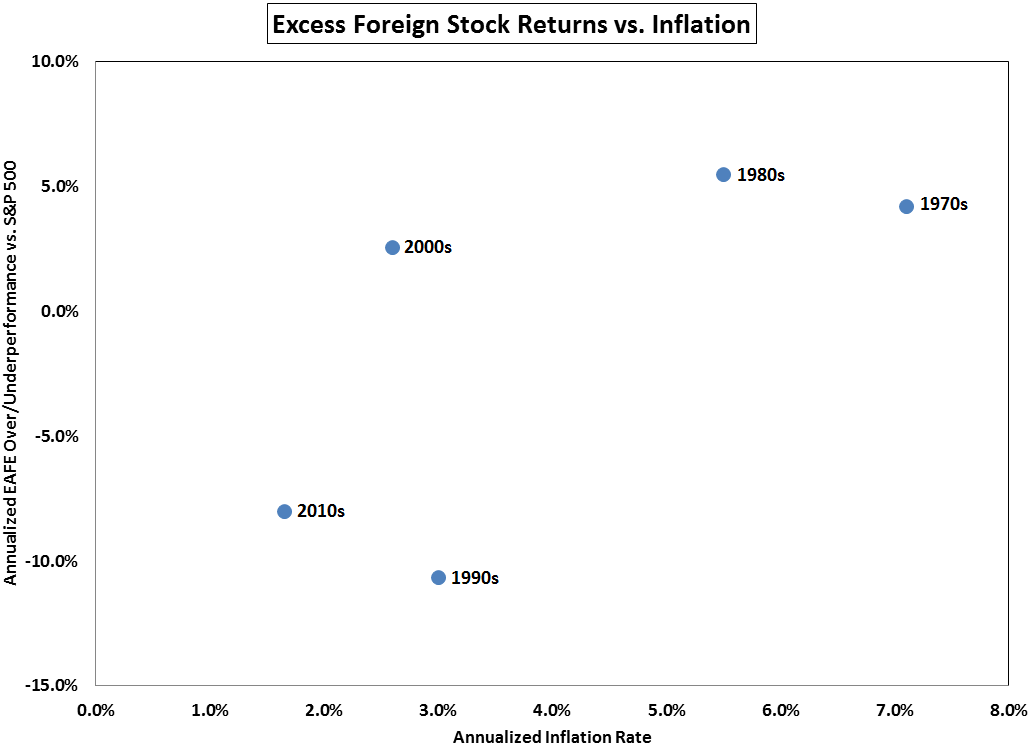 In both graphs you can see the relationship between inflation and outperformance of value and foreign developed market stocks. Higher inflation has tended to result in higher excess returns for both. Growth outperformed value in the 1990s and the current decade right along side of S&P 500 outperformance of the EAFE in lower inflationary times.

The idea for these graphs came from an old William Bernstein post on his Efficient Frontier blog from the early 2000s called Who Killed Value? It was a well-timed post that explained why value had been underperforming growth in the 1990s and why the value premium would eventually come back to life. Here Bernstein explains the reasons for the occasional divergence between value and growth stocks (remember HmL equals cheap minus expensive):

The original Fama-French paper covered a period of very high inflation, the years 1963-1990, and consequently showed a robust value effect. Towards the end of that period, interest rates and inflation commenced a long and powerful decline, which continues to this day—just the sort of environment expected to favor growth stocks. […]

Thus, if inflation stays at 2% to 3%, we can expect an HmL of similar size. And not coincidentally, the HmL for the full 74 years from July 1926 to June 2000 was 3.36%, while inflation was 3.12%. As long as there is fiat currency, there will be inflation; in the long-run, the value premium seems assured.

The most interesting feature of these data is that HmL is much more dependent on the absolute level of inflation than its rate of change. Why, in an efficient market, does a statically high (or low) rate of inflation produce high (or low) HmL? After all, one would assume that a static high or low inflation rate would be discounted into prices. This gets to the heart of the value premium. For if markets are truly efficient, this premium can only be compensation for some sort of risk. An alternative explanation is that markets are not efficient in the value dimension; that in fact, investors overestimate the magnitude and persistence of earnings increases for growth stocks, thereby overpricing them, and underpricing value stocks.

There is obviously a lot more to it than this and there could certainly be some correlation vs. causation issues going on here, but there is some logic behind this theory.

Investors tend to bid up growth stocks in a low interest rate, low inflation rate world because these times are typically associated with slower economic growth. Growth stocks rule in this part of the cycle because investors crave revenue and earnings growth any way they can get it in a slower moving economic backdrop. The cycle eventually turns when lofty expectations aren’t met. If you add in higher levels of inflation to the mix, it becomes a double whammy of unmet expectations and even lower company earnings numbers on a real basis.

Many investors have decided in recent years that international diversification doesn’t work anymore and value investing is dead because both have underperformed. This mindset ignores the cyclical nature of the markets. I’m not sure if or when inflation will pick up in the future. But I like the idea of structuring a portfolio to take into account a wide range of potential outcomes.