Many right now are saying real estate is the only way to get a real return in a safe manner. Will you post some data on real estate vs. bonds vs. stocks?

You always have to be careful when you use the word “safe” when it comes to investing. An investment that feels safe now could be very risky in the future and vice versa.

But this line of thinking makes sense.

Housing is a real asset. The simplest explanation for housing as an inflation hedge is because replacement costs are rising with higher prices and wages.

If you built your home years ago when labor and material costs were much lower, it would make sense that your house should be worth more today than when you built it. It would cost more to build your home all over again in a higher-cost environment.1

But how about bonds and real estate?

Now here’s a look at the average annual returns during different inflation environments: 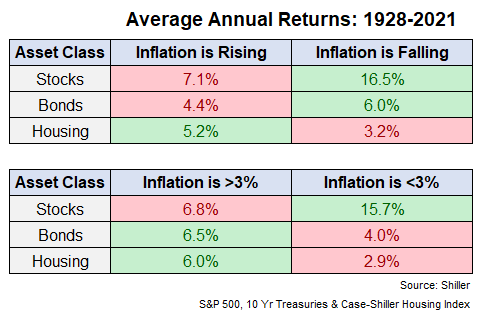 Again, this makes sense when you consider rising costs should make the value of your home appreciate since it’s a real asset.

It can also be instructive to look at the returns of these assets on a real basis, after accounting for inflation.

These are the real returns for stocks, bonds and housing by decade going back to the 1930s along with the annual inflation rate for comparison purposes: 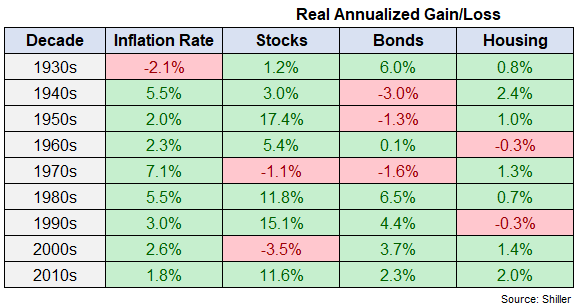 A few things stand out from this data.

The 1970s were a rough period for financial assets with both stocks and bonds seeing negative real returns once you account for inflation. But housing cleared that inflation hurdle and gave homeowners an excellent hedge against rising prices.

On a nominal basis, housing prices were down in the 1930s, but deflation led to a positive real return. I doubt that helped much at the time from a psychological perspective following the Great Depression.

The 1940s share some similarities to the current environment. There was massive government spending for the war, a boom in household formation and a huge spike in prices following the war-time spending. Even with inflation hitting more than 19% annually at one point following the war, the 1940s were the best real returns for any decade.

The 2010s were also a good time to be a homeowner even with one of the lowest inflation rates on record. That has more to do with the timing of the housing market crash but it’s important to note it’s not just inflation that can lead to price growth in real estate.

This data also proves just how crazy the housing market has been since the onset of the pandemic. From January 2020 through February 20223, the U.S. housing market was up nearly 21% in total even after accounting for inflation.

In a little more than two years, U.S. homeowners have experienced higher gains than we’ve seen in 7 out of the last 9 decades. This has truly been an unprecedented run in housing prices the likes of which we’ve never seen before.

So even if we see inflation remain elevated in the coming years, it’s hard to see housing continue to charge considerably higher.

This doesn’t necessarily mean housing will be a poor investment. Rents are rising while mortgage payments are fixed so being a homeowner is still a pretty good hedge against rising prices as inflation eats into your debts.

Further Reading:
Why Housing is a Good Hedge Against Inflation

1There’s a good argument to be made here that it’s the cost of land that’s rising as well.

2It’s worth pointing out here the long-term returns for housing are tricky when you consider the leverage involved and the imputed rent costs (you have to live somewhere).

3Shiller’s data is only up to date through the end of February.