My wife and I went on vacation in beautiful Marco Island, FL last week.

The resort we were staying at first opened in 1970. It was the first of its kind on the island and we came across a picture from when it first opened: 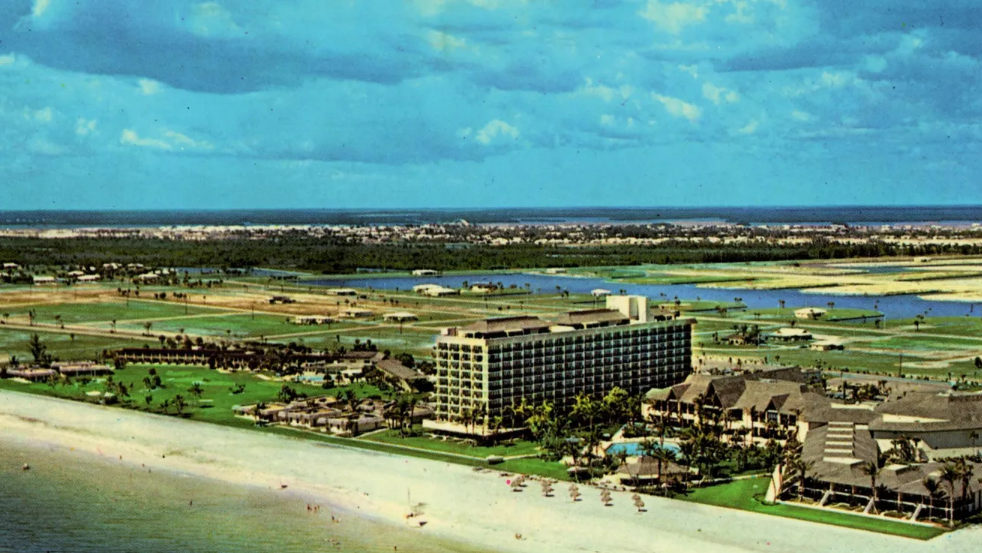 The island was unrecognizable with all of that grass and empty space. Just look at all that land! By the beach!

This is Marco Island now: Towers line the beach. Houses are situated on every other square inch of the waterways. Housing prices have been going bananas.

It’s hard to believe but the beautiful beaches of Florida — the whole state really — haven’t been developed for very long.

Chris Knowlton explains in his excellent book, Bubble in the Sun:

Florida in the 1870s remained a largely unsettled and undeveloped wilderness of dense pinewoods, impassable palmetto jungle, and tangled mangrove swamps. Scraggly beards of gray Spanish moss hung from huge cypress trees and live oaks along the riverbanks. The farther south you went, the swampier the state became. A few tiny fishing villages had sprung up along the sandy coasts, but the vast interior was largely unexplored— a land of watery saw grass and shallow lakes and jungle hammocks where the bay laurel and myrtle competed with the oaks and the palmettos, and where bromeliads, or air plants, sprouted from the tree branches. The state could accurately be described at the time as America’s last frontier. Roads were virtually nonexistent. Stern-wheelers lazily plied the inland waterway between St. Augustine and Jupiter. The largest town was Key West, with its population of ten thousand, situated at the far end of a string of coral reef islands off the southern tip of the peninsula.

It wasn’t until the 1920s that people poured into the state in large numbers for the first time. And that was only because developers like Carl Fisher and Henry Flagler spent years building out the land and infrastructure to make it livable.

It took more than 8 years and $35 million to build out the bridges and railroad tracks from Miami to Key West.

Entire cities were created up and down both coasts. Land was dredged up from the sea floor to fill the swamps with enough sand, mud and rocks to create many of the beaches and islands tourists now visit. They were essentially creating land where none had existed before, at least not in a usable way.

And once that land was ready, there was an insatiable desire from the public in the 1920s Florida housing bubble:

The great Florida land boom would prompt the country’s greatest migration of people, dwarfing every previous westward exodus, as laid-off factory workers, failing farmers, disaffected office clerks — anyone unemployed or seeking a better quality of life — boarded southbound trains or climbed into their Tin Lizzies and made their way to this emerging land of opportunity, touted as a tropical paradise. Six million people flowed into the state in three years. In 1925 alone, an estimated two and a half million people arrived looking for jobs and careers, and, for a time, found them in the building trades. As one observer wrote: “All of America’s gold rushes, all her oil booms, and all her free-land stampedes dwindled by comparison with the torrent of migration pouring into Florida.”

In 1925, the U.S. population was 115 million people. This means more than 5% of the population moved to Florida in just 3 years.

The next big migration caused by the housing market took place following World War II when millions of soldiers came home looking to settle down in the suburbs.

Until he arrived on the scene, builders were small-time operators, employing multiple subcontractors (“graduate carpenters and bricklayers,” Levitt called them). The typical prewar builder put up fewer than five houses a year (few put up more than two a year since the Depression). Levitt revolutionized the process of home building with remarkable planning and brilliant control procedures. These techniques made it possible to provide inexpensive, attractive single-unit housing for ordinary citizens, people who had never thought of themselves as middle-class before. As much as anyone, William Levitt made the American dream possible.

The first Levittown development in the New York suburbs consisted of some 17,000 houses, filled with 82,000 people.

The development started out as no-frills assembly-line houses that were low cost, affordable and all looked the same. Eventually homeowners wanted more, so the builders gave them some options — Cape Cods, Ranches, Colonials and such.

The suburbs exploded in numbers.

In the three decades beginning in 1980, 18 of the 25 biggest cities saw their population fall. Sixty million people moved to the suburbs. More people lived in the suburbs than in cities for the first time in the modern United States.

By the mid-1950s, subdivisions like Levittown accounted for 75% of new housing starts. Once the suburbs were filled up, 10% of builders were putting up 70% of the houses.

Researchers from the National Bureau of Economic Research put out a report last month that details what could be the next great migration in housing.

They wanted to better understand the biggest causes of the record increase in housing prices since the start of the pandemic.

Their findings show most of the boom came from remote work opportunities:

We show that the shift to remote work explains over one half of the 23.8 percent national house price increase over this period.

Our results imply a fundamentals-based explanation for the recent increases in housing costs over speculation or financial factors, and that the evolution of remote work is likely to have large effects on the future path of house prices and inflation.

So it wasn’t all speculation or a bubble or anything like that. Most of that increase is attributed to people having the ability to move about the country more freely. And for a lot of people this meant moving from a high cost of living big city to a lower cost of living area of the country.

Remote work may have been the tide that lifts all boats in terms of a one-time boom in real estate prices.

All of the economic charts from 2020-2022 are going to look broken to future generations.

But it’s quite possible the abrupt change to remote work for so many white-collar workers is going to be seen as a turning point in both the housing market and migration patterns of millions or people in the years ahead.

Michael and I talked about the housing market and more on this week’s Animal Spirits:

Further Reading:
As Old as the Hills