For the second edition of his book, Irrational Exuberance, Robert Shiller put together a database of home prices in the United States going back to 1890.1

His timing was impeccable. Shiller’s data showed how out of whack U.S. housing prices were to historical data just as the housing bubble was about to pop.

It was an excellent call backed by data.

Shiller showed real housing, after adjusting for inflation, returned very little for homeowners over the long-run.

This wasn’t necessarily a bad thing since housing prices kept up with inflation over the long-term. But this would be a disappointing result for most homeowners, especially when compared to other financial assets like stocks.

We all know what happened next. The housing bubble burst and prices across the country fell 35% on a real basis through the bottom in 2012.

Shiller was proven right and it became obvious that the American Dream wasn’t as good of an investment as advertised.

The housing rout didn’t last. Prices have recovered those losses and then some: 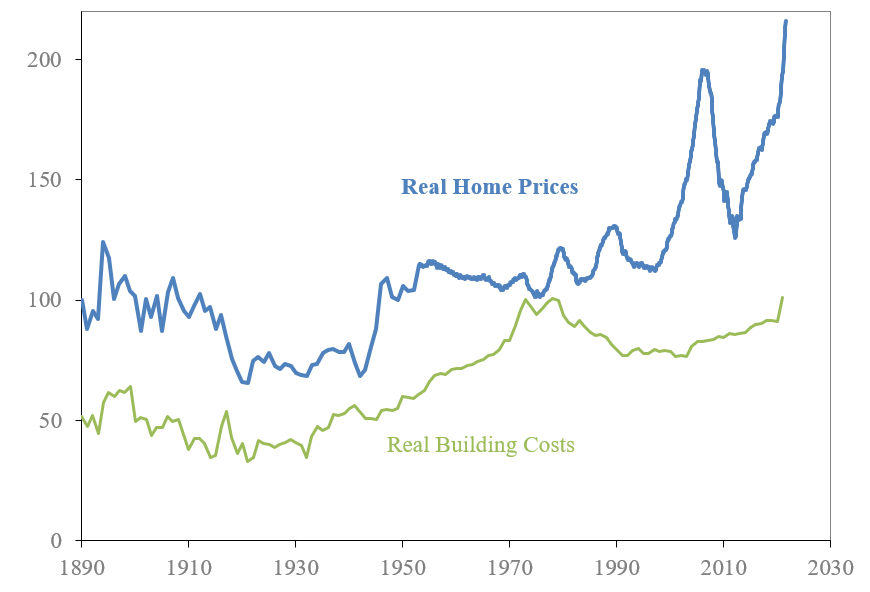 From the bottom in 2012, housing prices are up more than 70% on a real basis. Prices are much higher than they were at the peak of the mid-2000s bubble.

And the crazy thing is this housing boom bears almost no resemblance to the stories Michael Lewis told in The Big Short.

This time around borrowers have much better credit profiles. Their borrowing costs are lower. They’re not taking out risky adjustable mortgages with teaser rates that will reset substantially higher in a few years. And it’s not a bunch of people looking to flip houses for a quick buck. It’s the biggest demographic looking to put down roots.

Is it possible Shiller was wrong all along? Did we all have recency bias from the housing crash? Is a house actually a very good investment option?

For all three questions, the answer is — maybe?

I honestly don’t know how much we can trust housing data going back to the late-1800s. I’m watching 1883 right now and they had a hard enough time crossing a river without people dying so I’m not sure how thorough their housing records were back then.

Regardless, there has been an upward trend over time in real annual returns for U.S. housing: 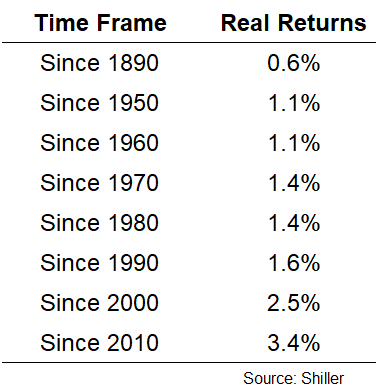 I’m not suggesting this upward trend will continue and there are certainly some caveats you could make here but modern times are probably more relevant than data going back to the 19th century.

Owning a home really didn’t become known as the American Dream until the 1950s.

World War II had just ended. You had all of these soldiers coming home ready to start their lives. The GI Bill helped provide low-cost mortgages but they also needed homes to live in and that was a problem.

Yet unlike the situation today, back then the government actually did something about it. They enacted a sweeping federal housing bill that gave builders a ton of leeway and guaranteed the mortgages. So builders went nuts.

All across the country they were spitting out houses like an assembly line for the middle class. And they were affordable at around $5,000 per cookie-cutter house (which was the average family’s pay for two years of work back then).

David Halberstam explains what happened next in his book The Fifties:

The suburbs exploded with some 60 million people moving out of cities into the burbs from 1950 to 1980. This explosion led more people to live in the suburbs than cities for the first time.

This building spree lasted well into the 1970s but has been in decline ever since. While the country averaged 15 million new homes built per decade from the 1970s through the 2000s, population is much higher than it was back then.

Here’s what I wrote back in May:

The combination of rising housing prices and fewer houses being built has created a situation where a home is probably a better investment option than it was in the past.

Things are even worse in many countries outside of the United States. These stats from Work in Progress are bananas:

The most dramatic evidence of housing scarcity can be seen in price rises over the past forty years. Average New York City metropolitan area house prices are up 706% since 1980 (or 376% more than US consumer prices, and 326% more than US wages). For San Francisco the rise is 932%. London house prices are up over 2,100% in that period (or around 1,500% more than wages). Prices in Sydney, Australia, have risen by 1,450% (compared to hourly wage increases of 480%). In Ireland, prices have risen by about 800% in that period, driven by rises in Dublin in particular.

I’m not suggesting buying a home is a slam dunk investment. Nothing is.

There are still issues with housing as a financial asset. Most people underestimate all of the ancillary costs involved — property taxes, insurance, maintenance, upkeep, renovations and borrowing costs.

It’s also difficult to calculate the actual return for most people since you have to live somewhere. And I’m not sure how Shiller takes into account the inherent leverage involved in the equation since most people aren’t buying houses with cash.

Now you could make the case that there’s some recency bias in my position here as well. Prices are up a lot over the past decade or so. Interest rates have fallen. It would be difficult to see this situation repeating itself over the next 10 years.

So maybe where I fall on this is housing is a cyclical investment opportunity. At times it can be a wonderful investment. Other times it’s just a place you get to live while you don’t necessarily get rich.

Michael and I discussed the pros and cons of housing as an investment on this week’s Animal Spirits: