The Great Depression created an entire generation of frugal spenders and savers.

The pandemic may have created an entire generation of degenerate gamblers and speculators.

Most people assumed speculative activity in the markets would cool off once sports came back, the casinos opened up again and people were able to move about more freely with their normal activities.

Judging by the action in options trading, that’s not the case. If anything, there is even more speculation going on in 2021 than 2020.

According to the Wall Street Journal, 9 out of the 10 most heavy trading days in history for call options have occurred this year. This will also be the first year on record where options trading dwarfs trading on the stock market:

By one measure, options activity is on track to surpass activity in the stock market for the first time ever. In 2021, the daily average notional value of traded single-stock options has exceeded $432 billion, compared with $404 billion of stocks, according to calculations by Cboe’s Henry Schwartz.

The last two years have seen a massive increase in average daily trading volume in options: 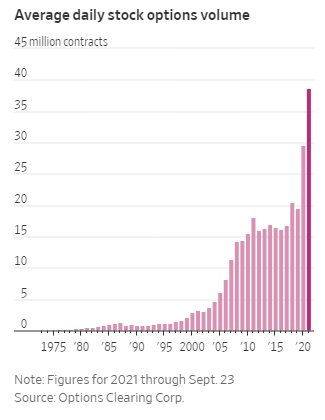 This is an obvious speculative mania, right?

There is certainly an insane amount of speculation going on in a variety of markets today. But that insanity is also being balanced out with more reasonable, cautious investor behavior.

Today’s market is a head-scratcher. 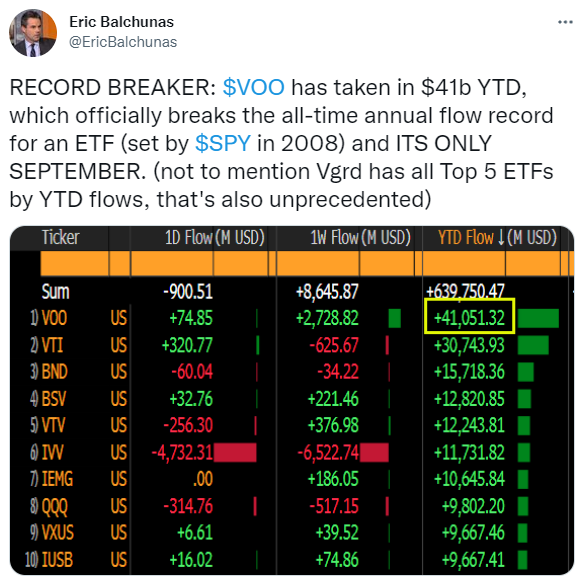 And it did so with 3 months to spare.

Well, it could be if you’re worried about the stock market as a whole.

Pseudonymous blogger Jesse Livermore created a model a number of years ago that tracks household allocations to stocks over time. You can see it’s now fast approaching its highest level ever at 51%: 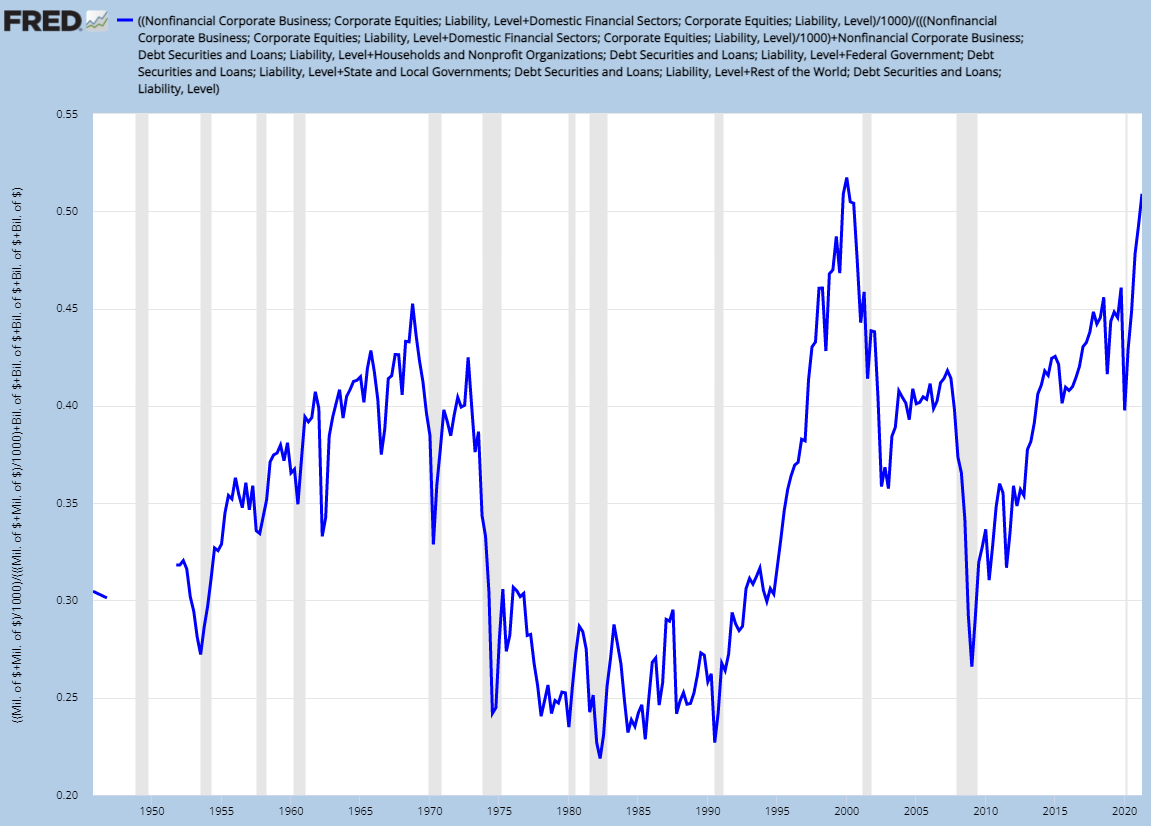 It’s possible this relationship remains in the future.

But it’s also possible the low yields in bonds have now forced investors to be willing to accept more risk in their portfolio. When this number peaked in 2000 the 10 year treasury yielded 6%. It’s now 1.5%.

And even though stock market allocations are elevated versus the past, it’s not like investors are ignoring the bond portion of their portfolio.

Data from Yardeni Research shows inflows into bond mutual funds and ETFs are as high as they’ve been going back to 2003 by a wide margin: 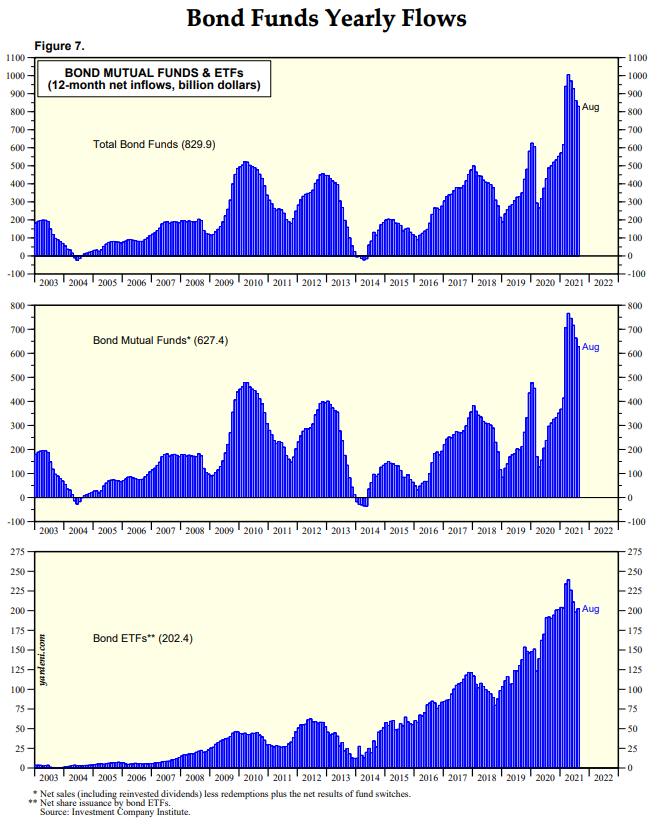 Despite generationally low interest rates, investors continue plowing money into bond funds. According to Yardeni, there was a record $1.01 trillion of inflows into bond funds for the trailing 12 months through April. The 12 month numbers through July and August were close to that record as well.

How could there be a speculative mania if so much money keeps flowing into fixed income?

On the opposite end of the risk spectrum, the start-up market is scalding hot (via CB Insights): 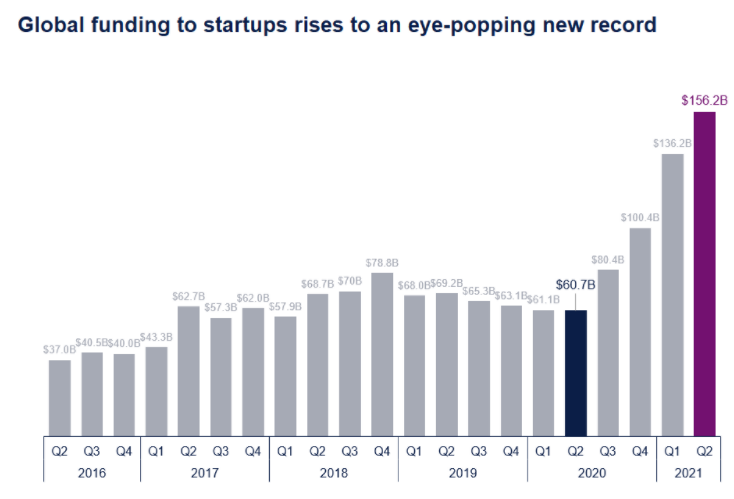 We might have to come up with a new name for $1 billion+ private companies because unicorns aren’t nearly as rare as they once were. In the second quarter of this year alone, there were 136 new unicorns minted. That’s in addition to the 113 in the first quarter of the year.

If you can’t get your tech start-up funded right now I don’t know that it’s ever going to happen for you. There is so much money sloshing around in this space.

Going to the opposite extreme, there is also a ton of money sitting in people’s bank accounts.

According to the Federal Reserve, there is now nearly $17 trillion in cash and cash equivalents (money market funds, savings accounts, etc.): 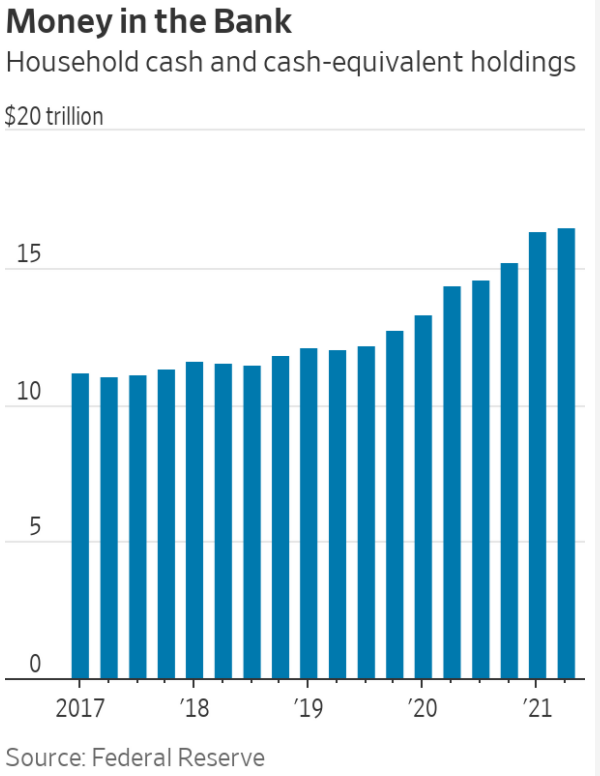 So what is an investor to make of this information?

Speculation in options does seem out of control compared to the past. Stock market allocations near all-time highs do seem worrisome. Valuations in the start-up world seem to go up every single day without fail.

This all seems to point to an environment where risk is running rampant.

However, this is all being balanced out by the fact that people continue to invest in index funds. One of the reasons interest rates remain low is because investors are pumping more money than ever into bond funds. There is also a record amount of cash on the sidelines sitting in bank accounts earning nothing.

And I didn’t even mention how well consumer balance sheets are doing thanks to all of this (and the rip-roaring housing market).

There are plenty of investors and pundits that would like to you believe “everyone” is acting like the guy in Vegas who has gone back to the ATM eleven times after nine jack and cokes and 36 hours straight in the casino.

It’s not as cut-and-dried as that.

This market is more confusing than it appears at first glance.

The only thing I know for sure is there is a lot of money sloshing around in just about everything these days — stocks, bonds, savings accounts, start-ups, crypto, NFTs, collectibles and housing — and that makes this a difficult market to analyze.

Michael and I discussed all the money sloshing around and much more on this week’s Animal Spirits video: