Here’s the cover from a Time Magazine story on the finances of the United States government: 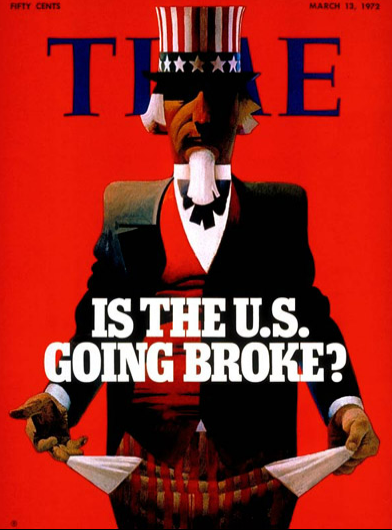 If you squint you can see the date of this publication in the upper-righthand corner. It was published in 1972.

Here are some excerpts from the story:

In terms of its ability to pay for the public services—health care, education, welfare, garbage pickup, pollution control, police and fire protection—that make the life of its citizens pleasant, or at least tolerable, or in some cases even possible, the country seems almost to be going broke.

If the country’s governmental units follow their present course, they will respond partly by further raising some taxes, partly by rejecting some badly needed programs, and largely by plunging deeper into debt. That is a self-defeating course. Keynesian economists have oversold the idea that public debt does not hurt because “we owe it to ourselves.” Interest on the debt—currently $12 billion a year for the Federal Government—devours tax dollars that are urgently needed for other purposes.

The United States didn’t go broke despite interest rates going sky-high from that point on.

It’s difficult to make comparisons across eras because markets and economies are constantly changing but it’s hard to believe how different the rate environments are between now and then.

Of course, we as a country spend far more money now than we did back then.

Today we owe close to $29 trillion.

Obviously, the fiscal response to the pandemic has added to this debt but it was going to be moving higher either way. Covid just sped things up a bit.1

It’s also interesting to see how government debt has evolved over time. Brian Riedl put together a bunch of charts that show the main reason for higher government debt and it may surprise you.

Mandatory vs. discretionary spending is vastly different than it was back in the 1960s: 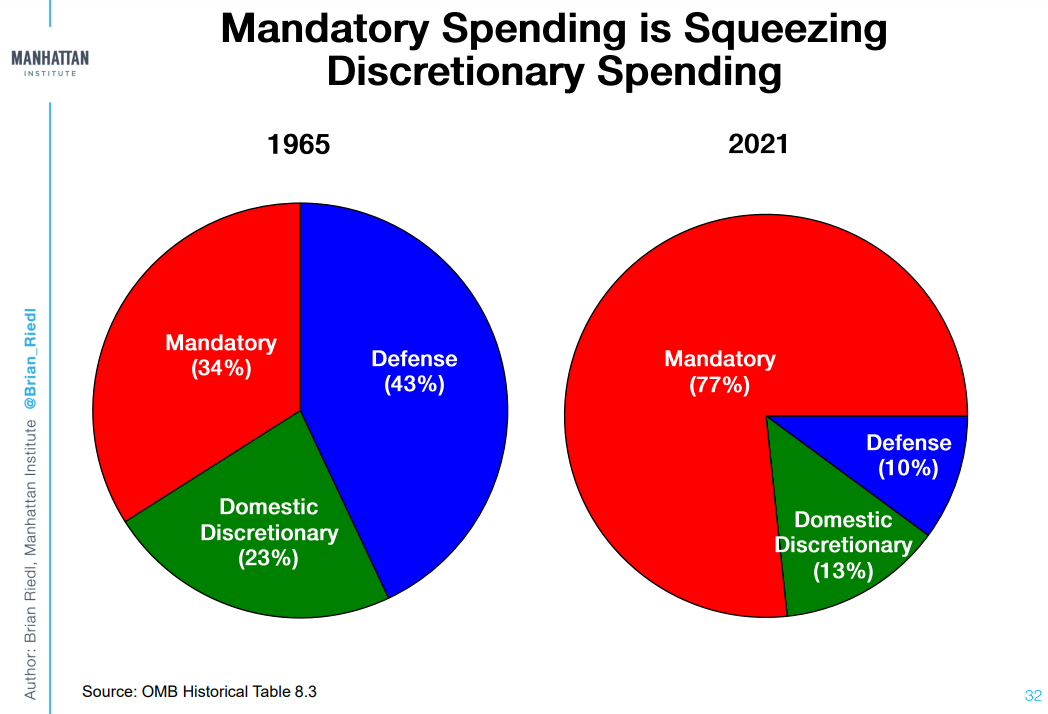 There’s a reason for this.

The baby boomers are the biggest generation of all-time to live as long as they are. When Social Security and Medicare were first introduced no one really planned on those programs taking care of 70+ million people for multiple decades.

Now look at how these programs are taking up a bigger piece of the pie over time: 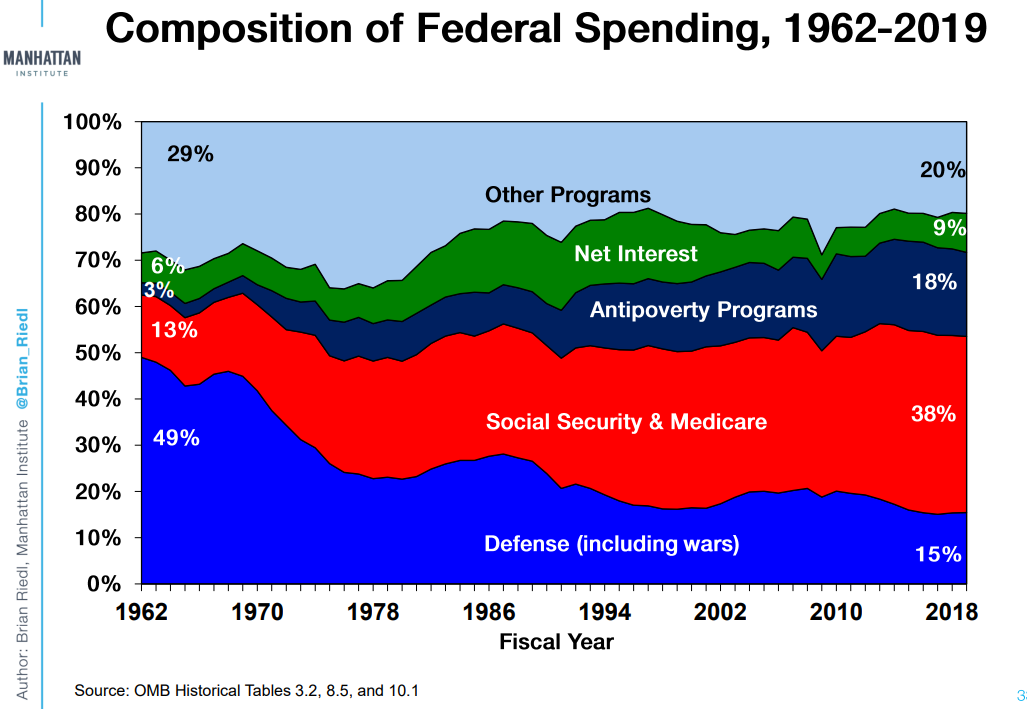 I’m wary of future predictions about government spending. Think about debt projections before the pandemic. No one could have foreseen the fiscal needs we would have.

What if there are wars in the future? Or UBI? Or who knows what else?

But it’s pretty safe to say the spending for these programs will continue to rise in the years ahead. Here’s one projection: 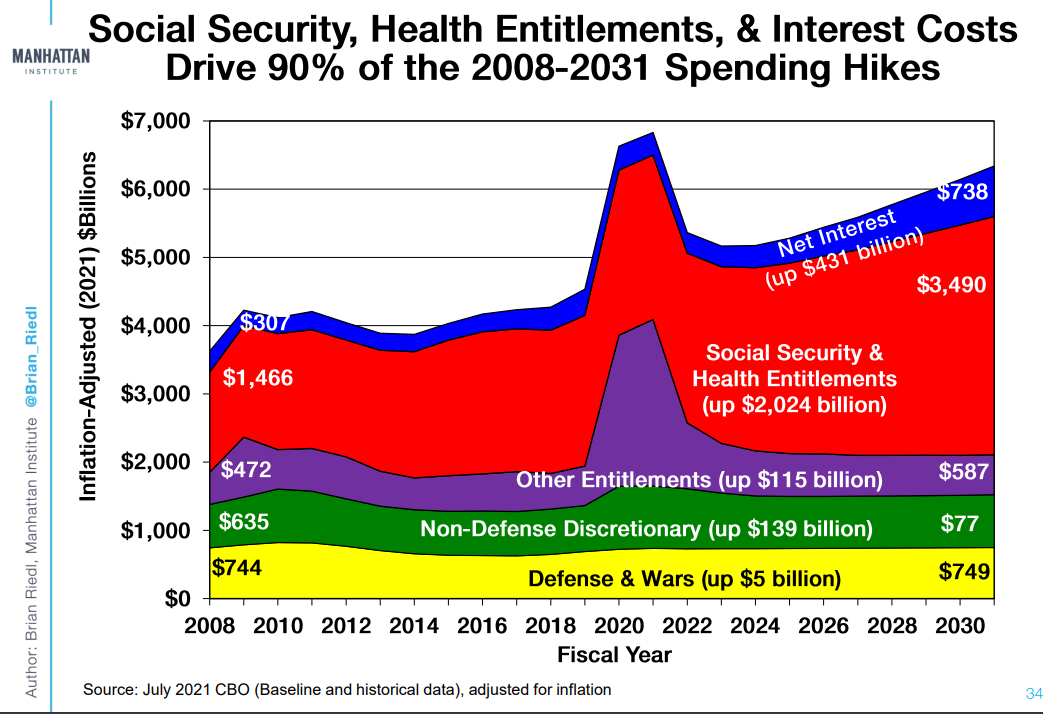 Social Security and Medicare are positioned to be the biggest drivers of a rise in the deficit in the years ahead assuming we don’t have an intergalactic war or another pandemic that forces us to pick up the slack for an economy that’s put on ice: 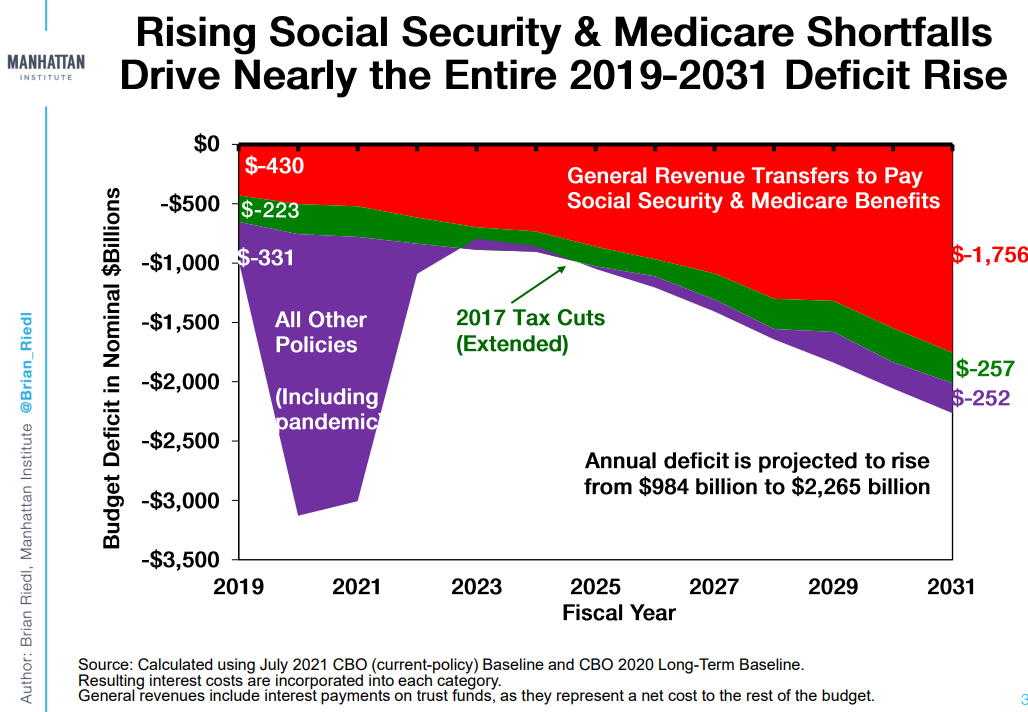 Again, take any future projections for many aspects of government spending with a trash can full of salt but it’s not like Social Security and Medicare spending is going to fall anytime soon. This is the one piece of the pie where you can project with a fair degree of certainty.

Every generation worries government debt is too high yet all it does is continue to rise over time.

The only thing I’m really certain about when it comes to this topic is government debt will be higher in the future than it is today.

I have no idea if this ever becomes the crisis so many people have been predicting for so long.

However, I do have some questions as it pertains to higher government debt levels:

The United States government cannot go broke. It’s not a household. We can literally create new money with the push of a button.

The debt itself doesn’t really worry me. What worries me is how certain people, groups and politicians will use debt to push their agendas in the years ahead.

The risk is not in the debt level itself but people’s reaction to what the debt is being used for.

Further Reading:
Do We Need to Worry About Government Debt?
Can Young People Still Count on Social Security?

1And if we didn’t spend what we did we would have paid for it with a depression, so this seems like a good trade-off to me.