Following the Great Financial Crisis, economic growth was below trend, inflation was low and wage growth was slow.

Since the pandemic, economic growth is higher, inflation is finally taking off and wage growth is accelerating.

Each scenario has its own unique challenges and trade-offs.

When you’re dealing with something as big and complex as the U.S. economy, there is no equilibrium where everything is perfect. There are always going to be unintended consequences for both policy actions taken and not taken.

The unintended consequences of the pandemic response from the government are now hitting the news on a regular basis.

Inflation is higher so people are having to pay higher prices for certain goods. 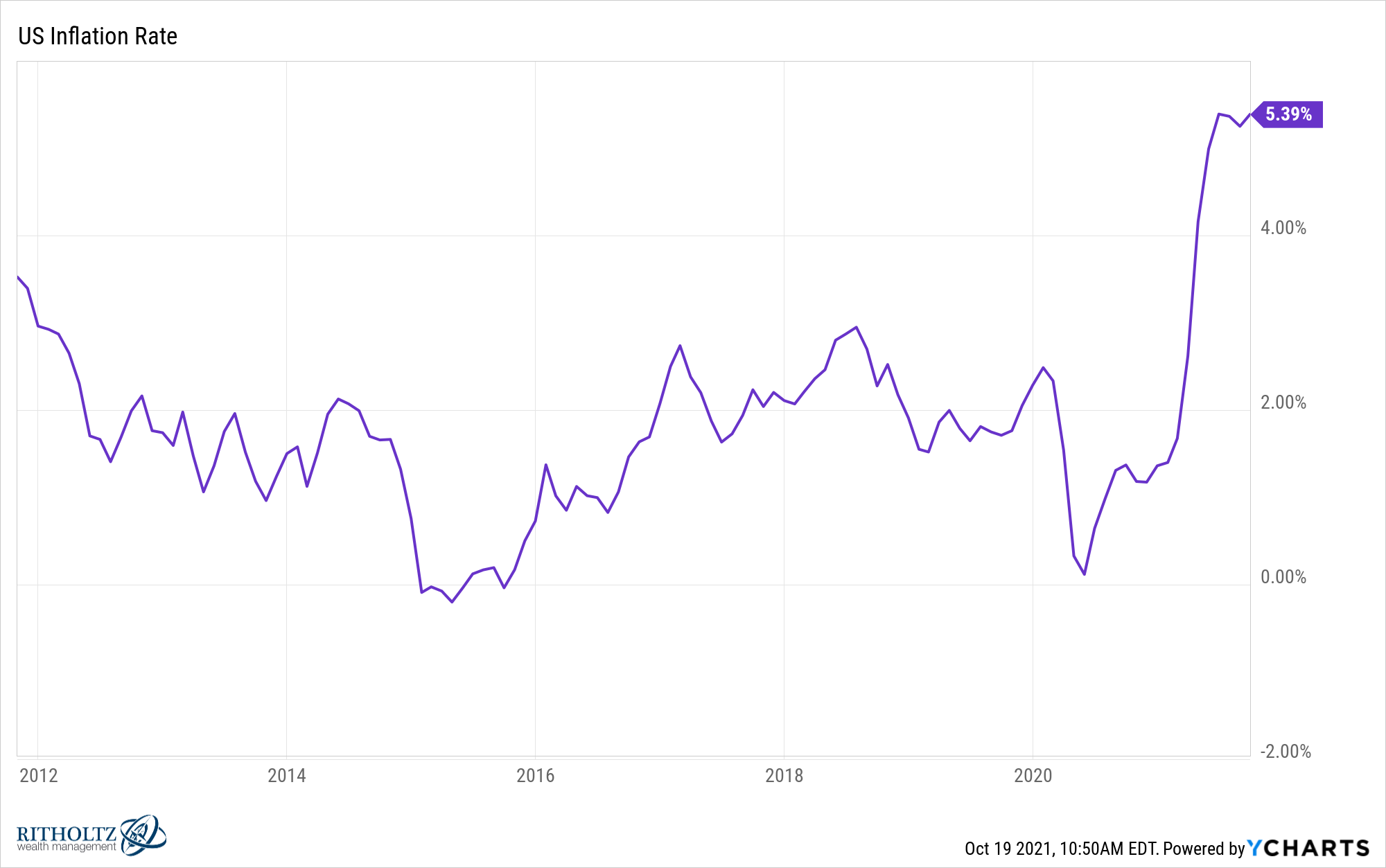 Global supply chains are a mess for many products and industries. It’s become a daily occurrence to see pictures of huge cargo ships waiting to dock at ports in California. 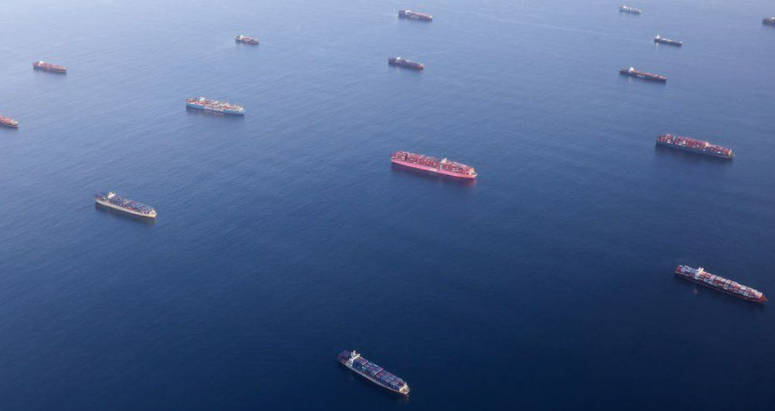 Good luck getting the toys, appliances, automobiles or building materials you want right now. People are already shopping for the holidays for fear the stuff they want won’t be there.1

And it’s not just getting stuff that’s becoming more inconvenient.

Service-based businesses are struggling because they either can’t hire enough staff, can’t retain their current employees or can’t raise their wages high enough to attract workers.

Customer service has gotten worse as a result at many establishments.

These are the downsides of an unprecedented amount of fiscal stimulus from the government. It’s understandable people are worried. Households and businesses are being impacted in a real way.

We as a society have a tendency to focus on the negative aspects of, well, just about everything.

So allow me to look at some of the positive externalities of what’s going on in the economy right now.

First off, there are nearly 10.5 million job openings in the U.S. compared with 7.7 million people who are unemployed: 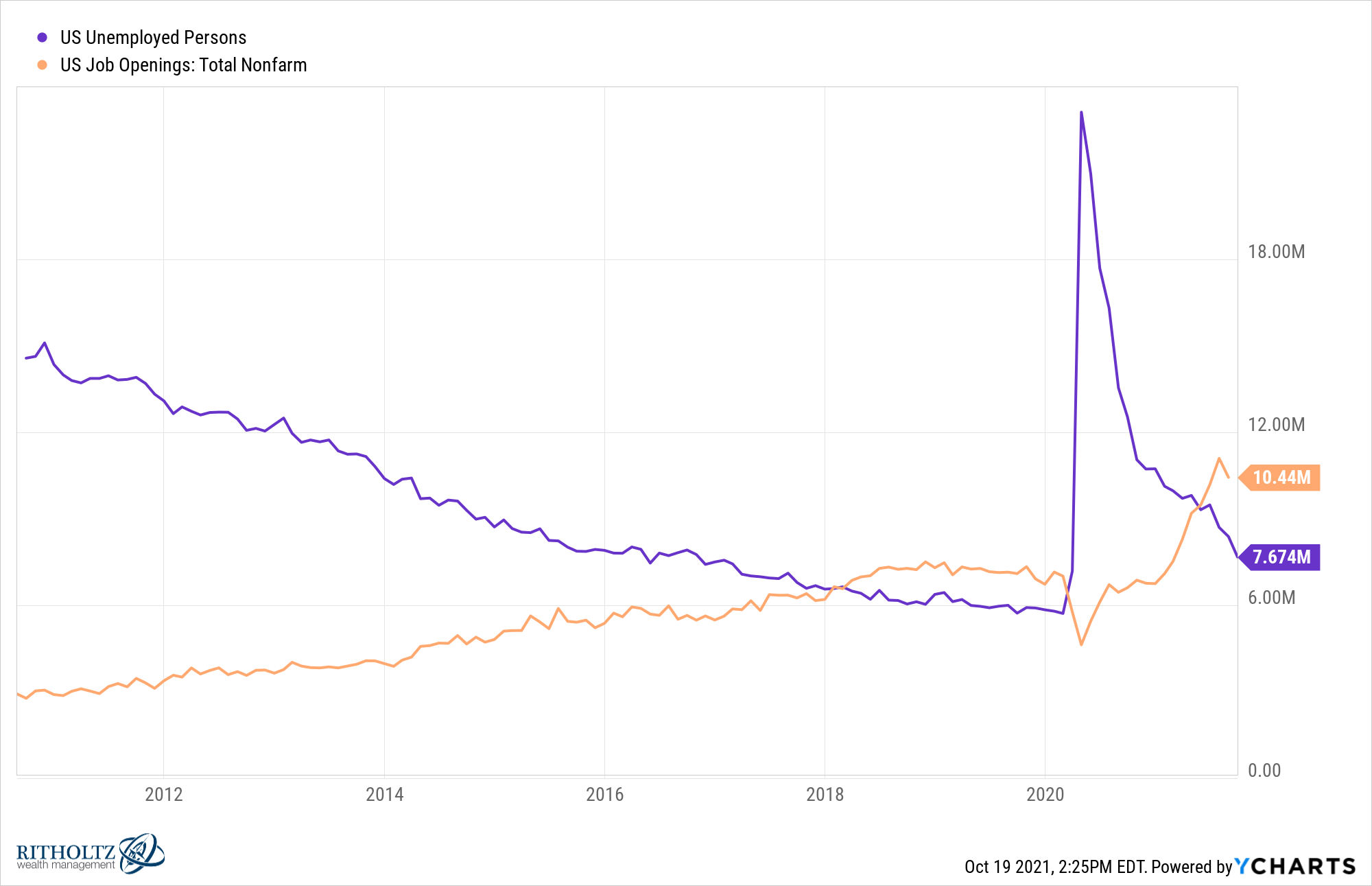 At first glance, this would seem to be a problem. There are more job openings than people looking for a job.2

However, doesn’t it show confidence in the economy and their outlook for the future that businesses want to hire more people than ever before?

There are also a record number of people quitting their job right now: 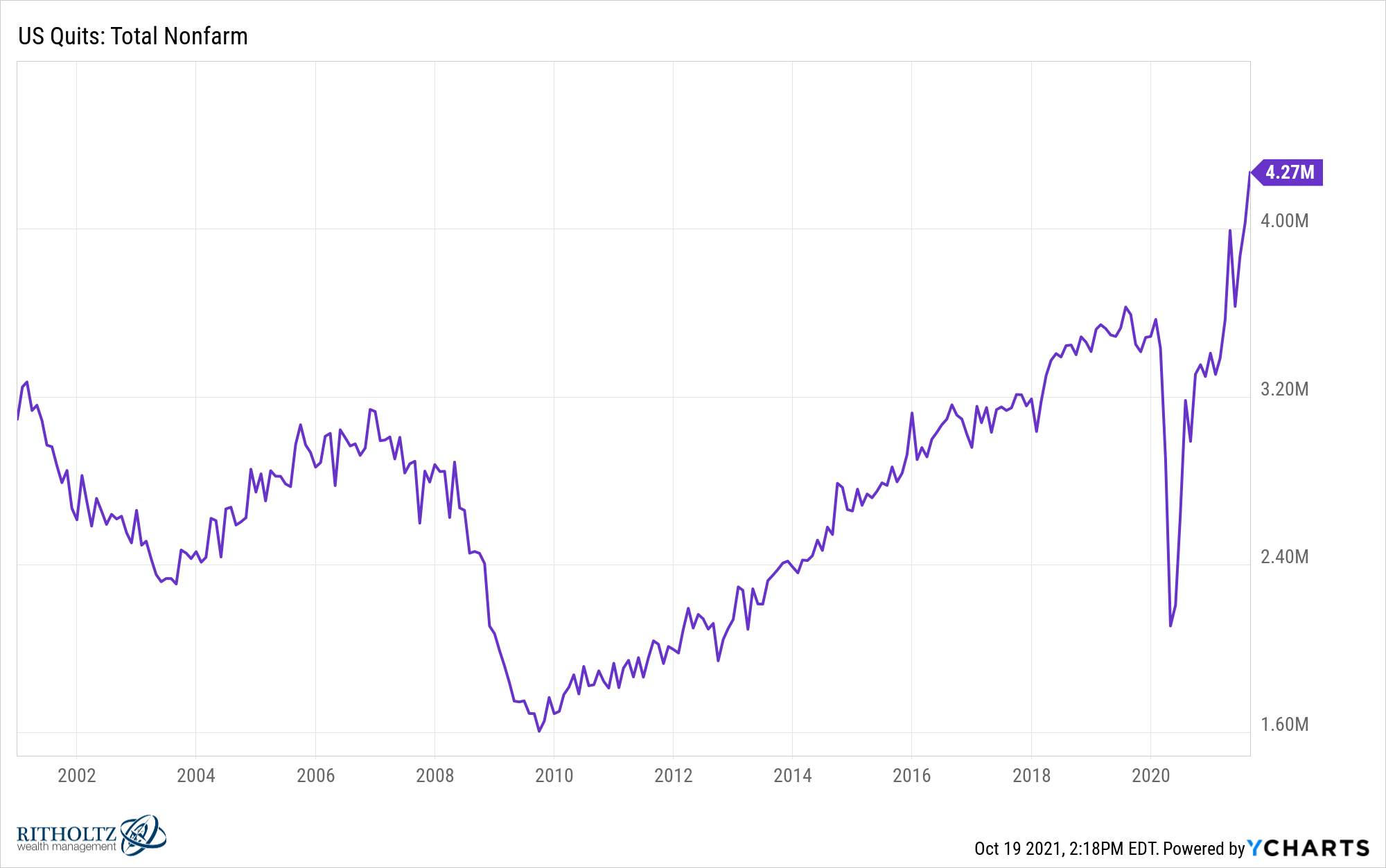 This is a continuity problem for businesses, but this is another positive sign.

People don’t typically quit their jobs voluntarily unless they have better prospects elsewhere or a nice financial cushion. Most people are quitting because labor finally has the upper hand to find better-paying or remote jobs elsewhere.

Some of those people quitting their jobs are taking a risk by starting their own business: 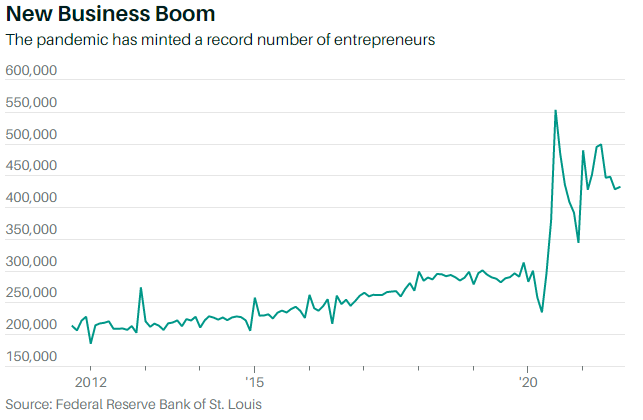 The pandemic forced many people to reassess their careers and allowed hundreds of thousands of people to become entrepreneurs. I have no idea how many of these people will succeed but I commend them for taking a chance.

The pandemic reassessment has changed the housing market as well. 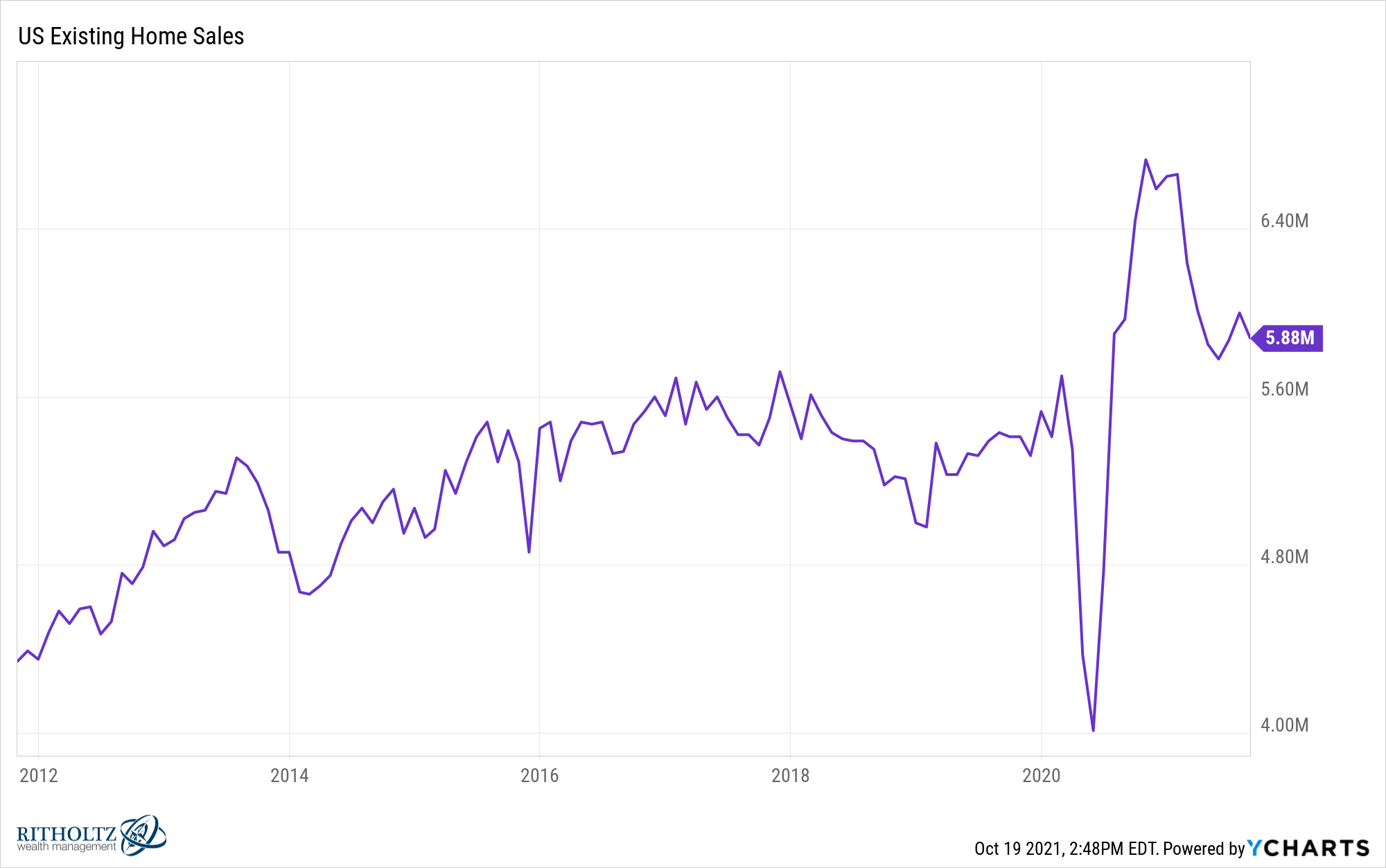 Yes, it seems like housing prices are out of control in a number of areas around the country. But the pandemic has given many households the opportunity to find somewhere new to live that might make them happier, give them more breathing room or allow them to be closer to friends and family.

And while supply chain issues have made life more inconvenient in many ways, one of the biggest reasons for these shortages is the explosion in consumer demand: 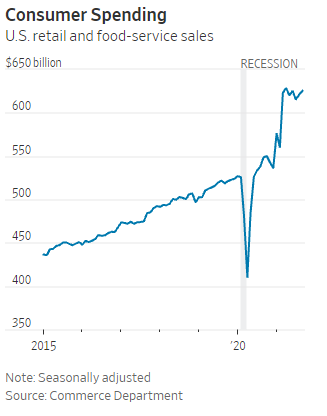 Coming out of the 2008 crisis, people weren’t spending enough money. Now the problem is too much demand. As far as the economy is concerned, you would much rather have too much demand than not enough of it.

This supply & demand imbalance is certainly having an impact on inflationary pressures but we’re probably lucky inflation isn’t even higher right now than it is. Look at the excess increase in savings since the start of the pandemic: 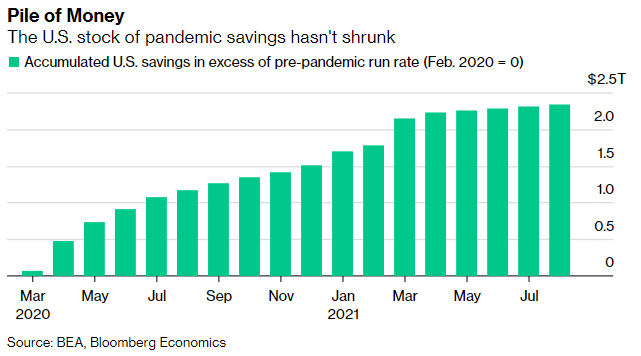 Or the decrease in credit card debt: 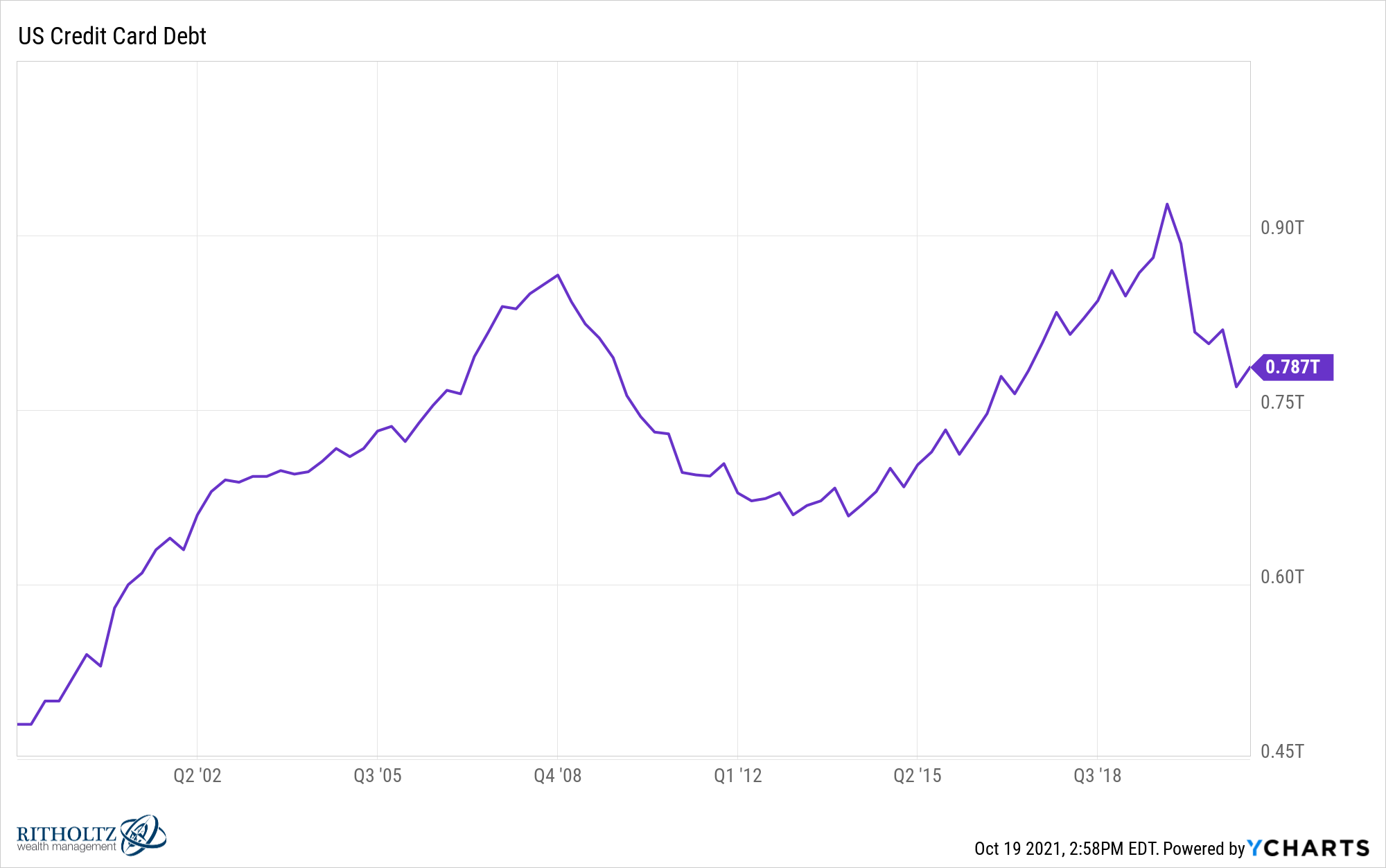 Households have managed to repair their balance sheets during the pandemic. Higher inflation isn’t always fun to deal with but you could make the case the U.S. consumer has never been better positioned to deal with an inflationary shock than they are right now.

And we still don’t know if inflation is really here to stay or not. 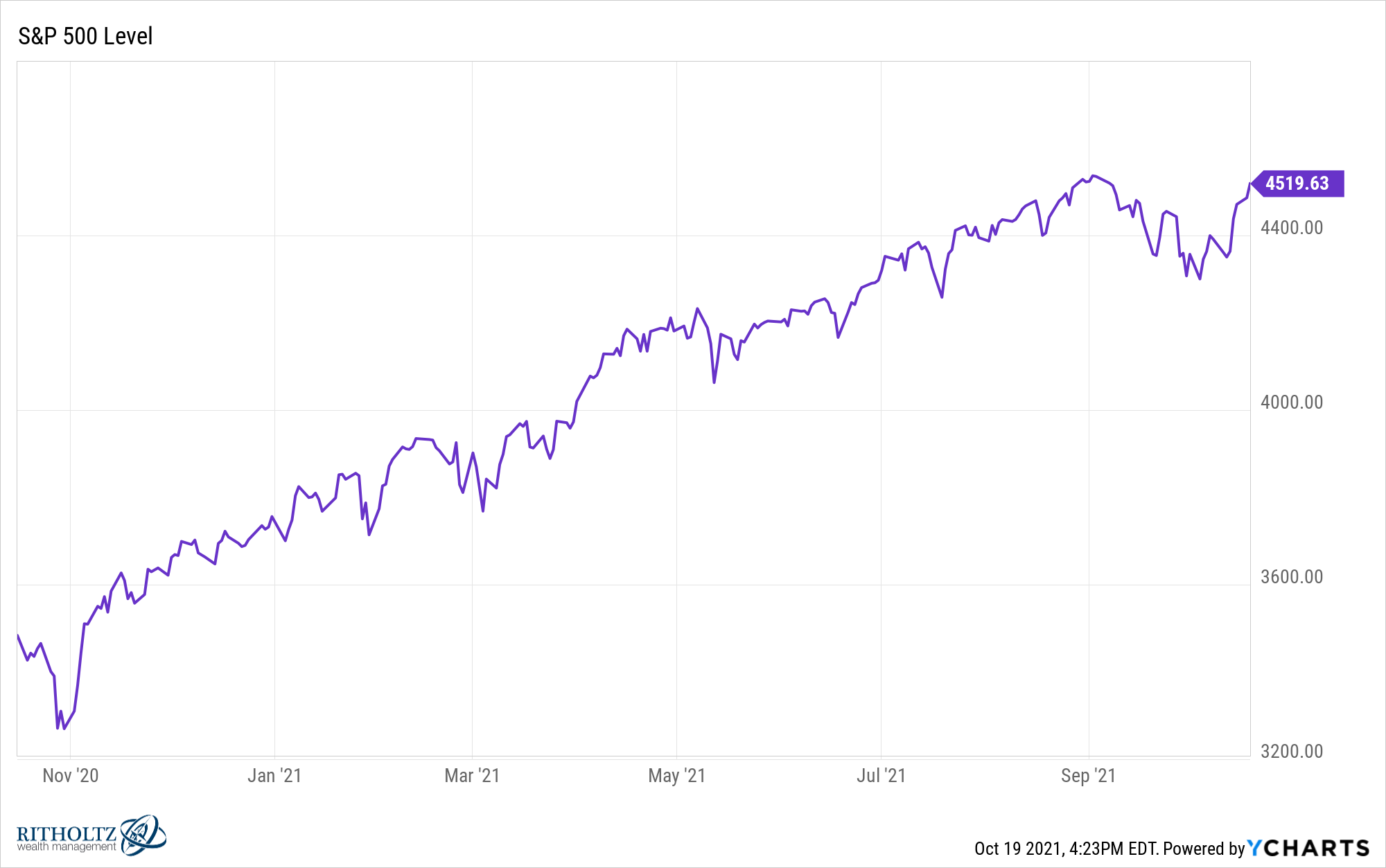 We’re basically back at all-time highs after a minor 5% correction.

I’m not trying to downplay the bad stuff here. The stock market doesn’t always speak for the entire country or economy.

If higher inflation is here to stay for a while it could make things tougher on certain households. Many businesses can’t meet demand from a lack of supply or labor. That has to be beyond frustrating given the level of demand from consumers right now.

But it’s important to remember there are always two sides to these stories.

If growth is high wages will eventually follow but so will inflation.

And if growth is too low prices will be more stable but wages will stagnate.

There is always going to be a give-and-take element no matter the economic environment.

1Is this going to be the worst Black Friday ever in terms of deals?

2It’s also worth noting here the U.S. labor force was close to 165 million people at the end of 2019.  It’s now 161 million up from a low of 156 million at the worst of the pandemic. Many of these people have retired but some may still come back.