A new study from the American Psychological Association came to the conclusion that having too little or too much free time lowers your sense of well-being. 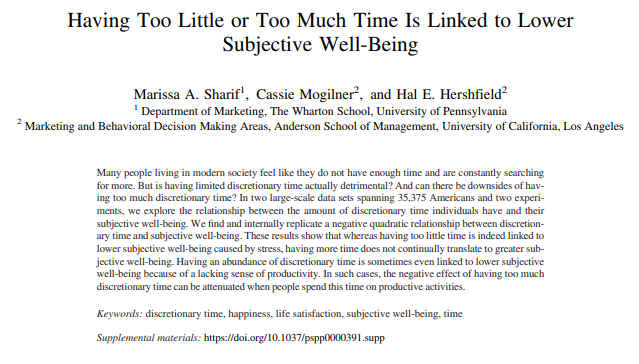 They found well-being rises up to around 2 hours per day and falls if you have more than 5 hours of free time a day. The sweet spot is a balance between fulfilling work and a moderate amount of free time.

I don’t know the accuracy of the study because these studies don’t always mirror reality. But this one makes sense intuitively.

Having too much free time means you lack a sense of purpose and productivity.

Not having enough free time means you don’t have enough balance in your life.

Balance is the key to happiness in most things in life. Unfortunately, striking the right balance is harder than it sounds.

Work is important but what if it comes at the cost of time with family and friends or hobbies or exercise?

It’s important to unwind but what if you’re falling behind in your career by not putting in enough time and effort?

Diversification in your investments is important but how do you determine the correct trade-off between risk and reward?

Diet and exercise are important but life is pretty boring if you never allow yourself to indulge.

The good thing is no one has life completely figured out. There are workaholics who have miserable personal lives. There are people with great social lives who hate their job. People who take too much risk put themselves in the position to lose it all someday. People who don’t take enough risk are missing out on the joys of compounding.

Of course, there is plenty of wiggle room between abundance and scarcity. Maybe the most important thing is avoiding going to extremes if you wish to lead a happy life.

One study had two groups of students come in for a chocolate tasting. The first group was told to abstain from chocolate for one week after the initial tasting. The second group was given a two-pound bag of chocolate and told to indulge as much as they like.

When both groups returned the following week, the students that abstained reported more enjoyment from the second tasting. The people who were eating chocolate all week enjoyed it much less than they had the prior week.

Too much of a good thing can reduce your appreciation of that good thing.

A similar relationship exists with travel. The more people travel, the less likely they are to savor each trip they take. Another study looked at U.S. residents with a wide range of travel history. Some were world travelers. Others only traveled on rare occasions and rarely to exotic locations.

The people who traveled infrequently were more likely to share their excitement from each trip with friends and family. They savored their memories of those trips and often went back to look at their pictures.

The people who traveled frequently had a more blasé attitude about their trips. It was more of a been there, done that mentality. They had less appreciation for U.S. destinations because there were so many other places they had been to.

Obviously, most of us would prefer more travel to less. But becoming a world traveler can make it harder to appreciate the simple pleasures.

Abundance often robs us of life’s small joys but scarcity presents its own set of challenges.

Researchers studied thousands of employees at Shell Oil for a number of years. They found employees who retired at age 55 had double the risk of dying before reaching age 65 than those who retired after age 60.

You would assume early retirement would lead to less stress and a more relaxed lifestyle. That would seem to boost longevity. Instead, the opposite happens. Mortality rates tend to improve with older retirement ages.

Now it’s not necessarily early retirement in and of itself that’s the problem in most instances; it’s more than many people don’t take the time to plan out what to do on their next adventure.

These types of studies don’t apply to everyone of course. There are always exceptions to the rule. But it is helpful to understand how important it is to have a purpose in life to help keep you engaged, sharp and moving towards a goal.

Happiness is a tricky concept.

The way I look at it is there should be enough balance in your life where every once and a while you force yourself to become uncomfortable.

That means when you’re slacking off from work too much, which happens more frequently in the summer months, you occasionally think to yourself: It feels like I should be working more.

And when you’re insanely busy with a project at work you should occasionally think to yourself: It feels like I should be slacking off more.

It’s like a tennis match with yourself that you can never win but as long as you stay in the game you should be happy.

At least that’s the goal.

Further Reading:
Why Are People Miserable at Work?