The last couple of weeks have been an absolute bloodbath for cryptocurrencies.

From the highs of just a few short weeks ago, bitcoin was down more than 50%. Ethereum was off 60% at one point yesterday. Hundreds of billions of dollars can be lost in a matter of hours in this space.

Here are four lessons from this latest episode of crypto carnage:

1. You have to stay in the game to survive as an investor. The last place you want to find yourself as an investor is being put in the position of being a forced seller.

There are two types of forced sellers: (1) those who sell in a panic because their emotions get the best of them and (2) those with too much leverage.

There are always going to be investors who liquidate their risk assets at the worst possible time during a market crash. It’s bad enough you have to experience bone-crushing losses when investing your hard-earning money but selling after those losses have already occurred is like a double stomach punch.

But that’s exactly what happened to many investors in March 2020. People thought things were going to get far worse after the initial plunge in stock prices but they didn’t, so many investors were caught flatfooted by the quick reversal.

In essence, these investors became forced sellers because they took on more risk than they could handle. The other side of this coin is those who take on too much risk and become a forced seller through margin calls.

Making money in the short-term is great but it’s useless if you can’t keep it over the long-term.

There’s a website that allows you to track the amount of money in the crypto space that has been liquidated each day across the ecosystem:

Adding it all up, since April 17th, there has been more than $42 billion of levered long crypto money liquidated, meaning they effectively got a margin call as prices fell, so their positions were sold.

I don’t care how bullish you are on crypto — if you take on too much leverage in an inherently volatile asset, you’re going to get burned eventually.

The only way you live to see the long-run is by surviving the short-run.

2. The 24/7 nature of crypto markets exacerbates volatility during a crisis. The stock market is only open from 9:30 am through 4:00 pm Monday-Friday.1

During a crash situation, this is an advantage for stocks. Investors get a chance to catch their breath and clear their heads. Policymakers have more time to think through potential solutions to keep markets afloat. And the downward selling pressure can be slowed in a freefall.

It’s possible the stock market would have fallen a lot more than 34% in March 2020 had markets been open all day, every day.

Crypto markets are completely different. They’re the 7/11 of markets, open at all times. And I’ve noticed something interesting about the latest bouts of selling — they tend to occur on nights and weekends.

Now you could make the case some of this is because these markets are global in nature. But I think it’s easier to manipulate crypto during the off hours. The selling can cascade in these times when traders are liquidated while they’re sleeping.

And for better or worse, there is no Federal Reserve for crypto. Satoshi can’t calm the markets by lowering interest rates.

I don’t think people should need the ability to trade at all hours of the day. This feature likely adds volatility, to both the upside and the downside, of crypto.

3. Crypto is its own beast. Crypto markets around the globe crashed and the response from stock market was a collective yawn. 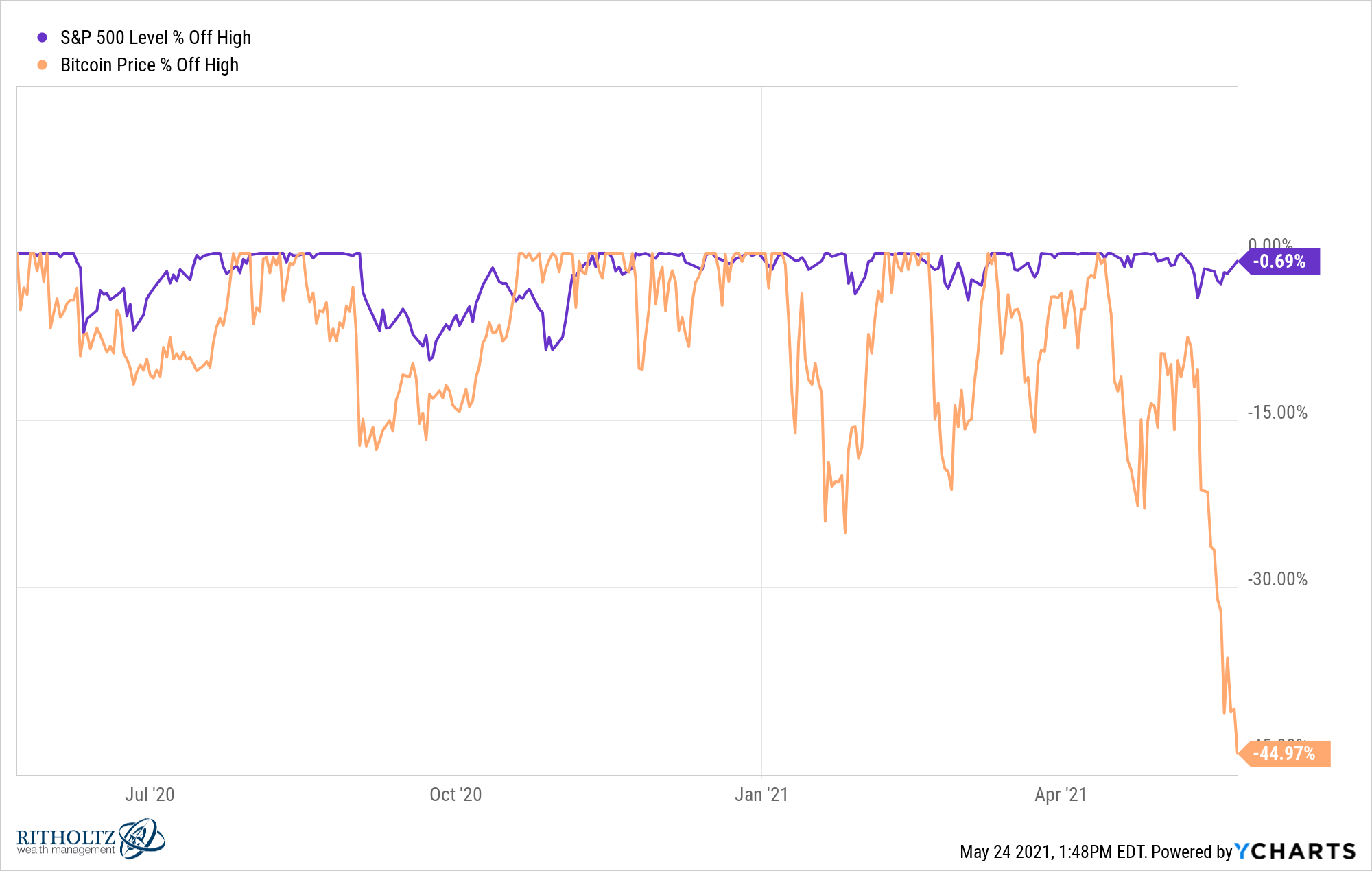 This is a positive for crypto as a diversified asset class. It marches to the beat of its own drummer.

Instead, you want assets that sometimes go in the same direction and sometimes go in opposite directions. This says nothing of the expected returns going forward but crypto and the stock market decoupling here is a long-term positive for the space.

4. Don’t invest in something you don’t understand. Crypto is still young and impressionable. Look no further than the impact of Elon Musk’s tweets on bitcoin in recent weeks (via Akane Otani at the WSJ): 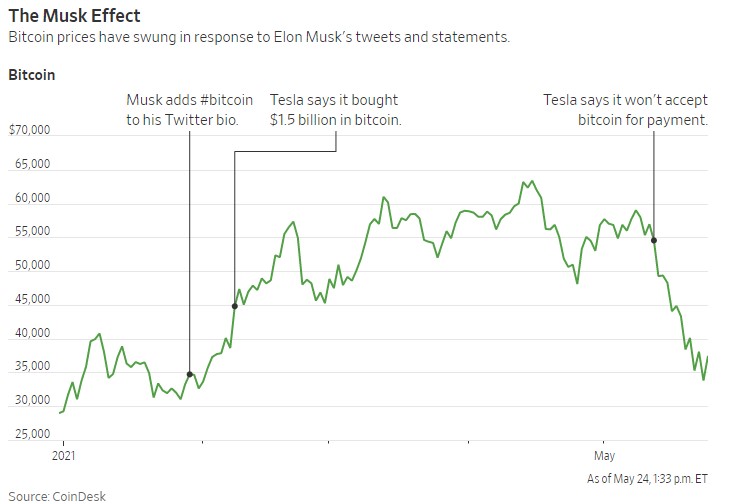 Obviously, Elon Musk isn’t the sole reason bitcoin has been rising or falling in 2021. He’s probably just been adding fuel to the fire in whichever direction this is going. Investors are also grappling with potential regulations, tax reporting changes and countries figuring out their views of digital currencies.

The reasons don’t really even matter.

The fact is, even though the entire crypto marketplace is worth around $1.6 trillion, it’s still as volatile as a penny stock. You can experience 1987-like crash in a matter of minutes or a reverse-1987 melt-up just as fast.

Crypto is still the Wild West since there are so few rules and regulations.

I don’t care how big you think the opportunity is in crypto, if you don’t understand how volatile these assets can be it’s going to be impossible to hold on when things go haywire.

Further Reading:
Crash Rules Everything Around Me

1Until the 1950s the stock market used to be open for a half-day on Saturdays.