LeBron James is 36 years old and still at the top of his game.

He won the NBA championship this past year and is in the running for yet another MVP this season.

For previous generations, 36 was considered ancient. You were lucky if you played that long. Guys in the 1960s used to smoke cigarettes after games. 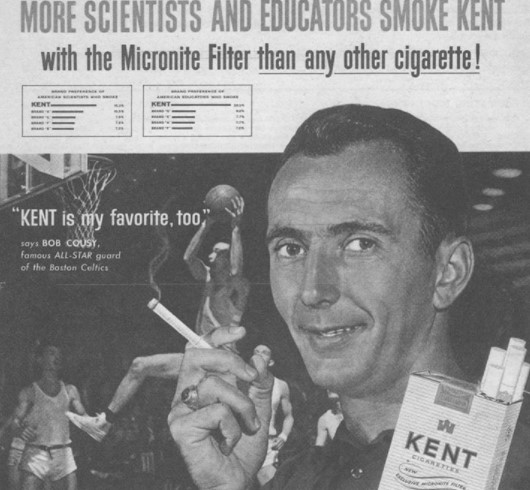 Players of today take so much better care of their bodies. The technology has improved. Diets have improved. The equipment is much better. Everyone knows more about what works and what doesn’t.

Back in the day players played themselves into shape during the season. Now the best of the best work at this stuff year-round. They have trainers, dieticians, coaches and teams of people that make sure everything is just right.

Players are more thoughtful about how they take care of everything and that extends to their off-the-court lives as well.

Kevin Durant has his own venture firm. His former teammate Andre Iguodala has invested in over 40 start-ups, including All Birds, Zoom and Jumia. Steph Curry has an investment arm as well.

If you’re someone who is constantly looking for Joe Kennedy shoeshine boy anecdotes, professional athletes getting into start-ups seems like a viable candidate.

But times have changed.

Superstar athletes are so much better informed than they were in the past. They’re partnering with the right people and organizations. And investing is not simply a way to build their wealth, it’s a status symbol.

The same is true for the ultra-wealthy in other industries as well.

In Software is Eating the Markets, Packy McCormick argues many start-up investments have as much to do with social status as investment opportunities:

In November, back when San Francisco was still more physical place than state of mind and most people associated Corona with lime, Alex Danco wrote an excellent post called The Social Subsidy of Angel Investing.

In it, he argued three main points:

In San Francisco, owning a Ferrari wasn’t nearly as cool as owning pre-seed shares in Stripe or Uber. In some ways, startup equity behaved more like a Veblen Good — one that paradoxically sees more demand as the price goes up — than like an investment.

Sure, people who are already rich always want to get richer but they also want something to brag about to their peers or when they go on podcasts.

You know, I was the third investor in Uber’s seed round.

I invested in Airbnb when everyone else thought the idea was a joke.

Investments are the new status symbol.

You could make the claim it’s been this way for a while now. There are more than 10,000 hedge funds in the world not because they all have outstanding performance but because wealthy people see them as a way to prove how wealthy and connected they are.

The difference now is there has never been a bigger market for promoters and investing is cool again.

Check out this who’s who of SPAC sponsors from The New York Times:

Jay-Z is involved with one. Shaquille O’Neal has one. Ciara Wilson sits on the board of one, as does Serena Williams.

Sports figures seem especially enthusiastic about them: Alex Rodriguez, Steph Curry and the activist and former NFL quarterback Colin Kaepernick — or should we say, “SPAC-ERNICK” — all have one. So does Billy Beane, the former Oakland A’s general manager and subject of the book and film “Moneyball.”

These people aren’t pulling the strings and making investment decisions. They’re the promoters and marketers. They help bring in more investors and attention. And they like the attention it brings them as well.

Individuals are now some of the biggest brands on the planet and corporations understand the importance of leveraging these brands.

Jack Dorsey announced this morning Square is buying Jay-Z’s streaming music service Tidal and putting him on the board at Square. Does anyone actually use Tidal anymore? Maybe? Doesn’t matter. Square is essentially buying Jay-Z’s name and brand.

Dave Portnoy from Barstool Sports just put his name behind an ETF that launches today:

Did VanEck partner with Portnoy because of his investing prowess? Of course not! They partnered with him because he’s an influencer with a massive brand and audience. He’s going to come out guns blazing to promote this fund and I’m sure many of his followers will invest.

The Rock started a tequila company coming on the heels of George Clooney and Cindy Crawford’s husband selling their tequila company for $1 billion. Jay Z just sold half of his champagne brand to Dom Perignon. And Seth Rogen announced this week he is fulfilling his dream of starting a weed company.

It’s never been easier to sell yourself or your brand to so many people.

Many investors will scoff at these stories and proclaim the end of this market cycle is near. And they have to be right eventually. At some point the good times will end, for a while at least.

But don’t expect this stuff to go away.

Ben’s rule number one of the unfortunate realities of the investment business is a talented sales staff will trump a talented investment staff when attracting capital from investors.

With the socialized nature of the world, the ability to promote has arguably never been more important.

It’s Robert Cialdini’s idea of social proof, which is our tendency to look to others to figure out the correct behavior. These people are called influencers for a reason.

This doesn’t necessarily mean every single one of these promoters is going to lead you to the promised land. There are sure to be some duds when a famous person puts their name on something without the requisite due diligence.

Even if we have a washout I don’t see this stuff is going away any time soon.

As Jay-Z so eloquently put it, “I’m not a businessman, I’m a business, man.”

1The bigger your audience on social gets, the more your feed starts to resemble advice from a fortune cookie. Those are the rules.