When Russia invaded Ukraine on Wednesday night, stock markets around the globe immediately sold off in the futures markets.

By the end of the day Thursday stocks had a furious rally, with the Dow finishing in positive territory, the S&P 500 up 1.5% and the Nasdaq 100 soaring more than 3%.

It seems odd to worry about the stock market at a time of war when people are dying, losing their homes and potentially the country they love.

The point here is the stock market is heartless. It often goes up in the face of godawful events when it almost doesn’t seem right.

I wrote about the relationship between war and the stock market a couple of years ago:

In the six months following the onset of World War I in 1914, the Dow fell more than 30%. Because the war basically ground the business world to a halt and market liquidity all but dried up, the decision was made to close the stock market that year. This lasted for six months, the longest such period on record. Making up for lost time, the Dow rose more than 88% in 1915 after it reopened, which remains the highest annual return on record for the DJIA. In fact, from the start of the war in 1914 until the war ended in late 1918, the Dow was up more than 43% in total or around 8.7% annually.

World War II had a similarly counterintuitive market outcome. Hitler invaded Poland on September 1, 1939, setting off the war. When the market opened on September 5, the Dow shot almost 10% higher that day. When the attack on the U.S. naval base at Pearl Harbor occurred in early December 1941, stocks opened up the following Monday down 2.9%, but it took just a month to regain those losses. When the allied forces invaded France on D-Day on June 6, 1944, the stock market barely noticed. The Dow rose more than 5% over the ensuing month.

So, during two of the worst wars in modern history, the U.S. stock market was up a combined 115%.

I’ve written about prior geopolitical crises as well:

U.S. troops were sent to Vietnam in March of 1965. The Dow would finish the remainder of that year up almost 10 percent. By the time the last of the U.S. troops was pulled out of Vietnam in 1973, the stock market was up a total of almost 43 percent, or just under 5 percent per year.

The Cuban Missile Crisis had the world on the brink of nuclear war in October of 1962. The confrontation lasted 13 days from Oct. 16, 1962, to Oct. 28. In that two-week period the Dow remained surprisingly calm, losing just 1.2 percent. For the remainder of that year the Dow would gain more than 10 percent.

President John F. Kennedy was assassinated a little more than a year later in Dallas. The market opened up 4.5 percent the day after. Stocks finished up the following year, 1964, more than 15 percent.

Stocks dropped 13.3 percent in the three weeks following the Gulf War in the summer of 1990. From July of that year through October, the S&P 500 dropped 19.9 percent, but this also coincided with recession.

The attack on U.S. soil on Sept. 11, 2001, saw stocks fall sharply, down almost 15 percent in less than two weeks following the tragedy. The economy was already in the middle of a recession at that point and stocks were still falling from the technology bubble, but within a couple of months the stock market had made back all of its losses from Sept. 11.

The U.S. invaded Iraq in March 2003. Stocks rose 2.3 percent the following day and finished up the year with a gain of more than 30 percent from that point on, though this followed the end of a brutal bear market.

Barton Biggs wrote about the stock market’s path throughout the war in his book Wealth, War and Wisdom. This is his passage about the state of the world in 1942:

By 1942, a map of the world showed Germany in control of most of Europe with its fierce hegemony stretching from the North Sea to the very gates of Moscow and Leningrad. At the peak of its expansion across Asia, Japan controlled ten percent of the land mass of the world and much of its most precious natural resources.

Since the actual fighting had begun in 1938, no army had been able to prevail in battle against the Wehrmacht, the most highly trained, disciplined, and well-equipped army in the world. By 1940, as John Lucaks points out in The Duel, Hitler’s armies had conquered all of Western Europe with less cost in men and equipment than the Germany army had expended in World War I for a few miles of trenches and mud. The resistance of the smaller European countries to this onslaught could be measured in days, and France, in spite of her large army and supposedly impregnable Maginot Line, had ignominiously been routed by the German Blitzkrieg. The British Expeditionary Force had barely escaped total annihilation at Dunkirk, and the Royal Navy had suffered grievous wounds at sea, in North Africa, and Norway. Britain still stood resolute in her island home, but she was slowly being starved to death by the U-boats, and no matter how gallant her armies, they had proved ineffective against German technology, discipline, and daring.

Things were looking bleak, to say the least.

Yet look at when the stock market bottomed: 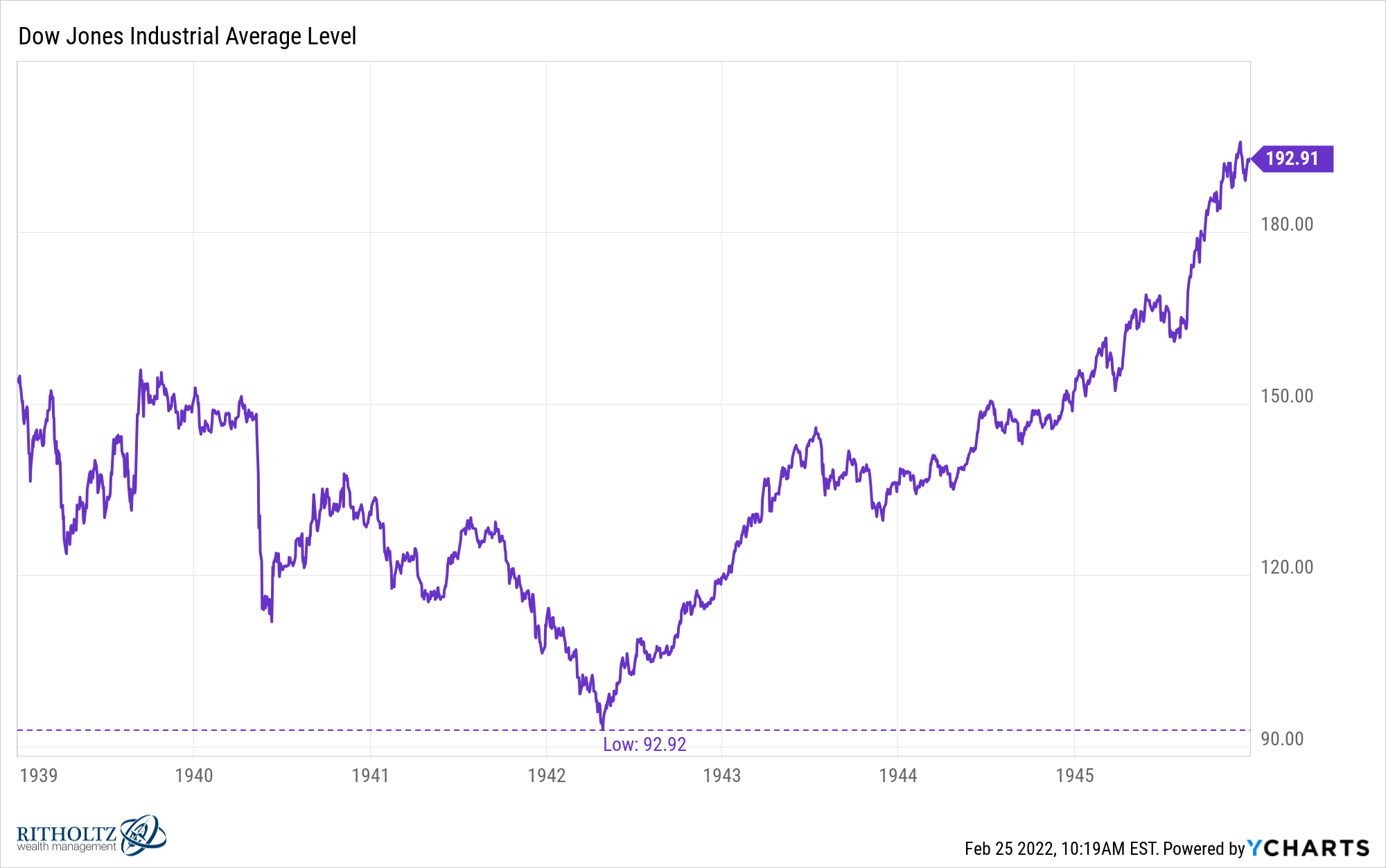 Even though the war wasn’t over until 1945, the stock market bottomed in that terrible, no good year of 1942 when things look so dire.

In fact, the bottom that American stocks made in the second quarter of 1942 was really the end of the great secular bear market that began in 1929. A new secular bull market was born that spring that would last for almost 20 years and would take American stocks to unimaginable new highs in the burst of post-war prosperity. Of course there would be intermittent cyclical bear markets, but only the big, dumb, clumsy stock market somehow dimly understood that the long bear market was over and that a new era had dawned.

The stock market is often counterintuitive. It’s forward-looking but not always right. It’s smarter than everyone at times but at the whims of the herd mentality at others.

I don’t know if the stock market bottomed this week. No one is smart enough to know these things in real-time.

Just know that trying to understand what’s going on with the stock market during a time of war can be confusing and counterintuitive.

And if the stock market is your biggest worry right now consider yourself lucky.

Further Reading:
The Relationship Between War & The Stock Market