Economic forecasters were fairly tepid for a number of months about prospects for the U.S. economy but that’s changed in recent weeks. Here’s Goldman’s take:

To put these numbers into perspective, take a look at the annual real GDP growth rates going back to 1950: 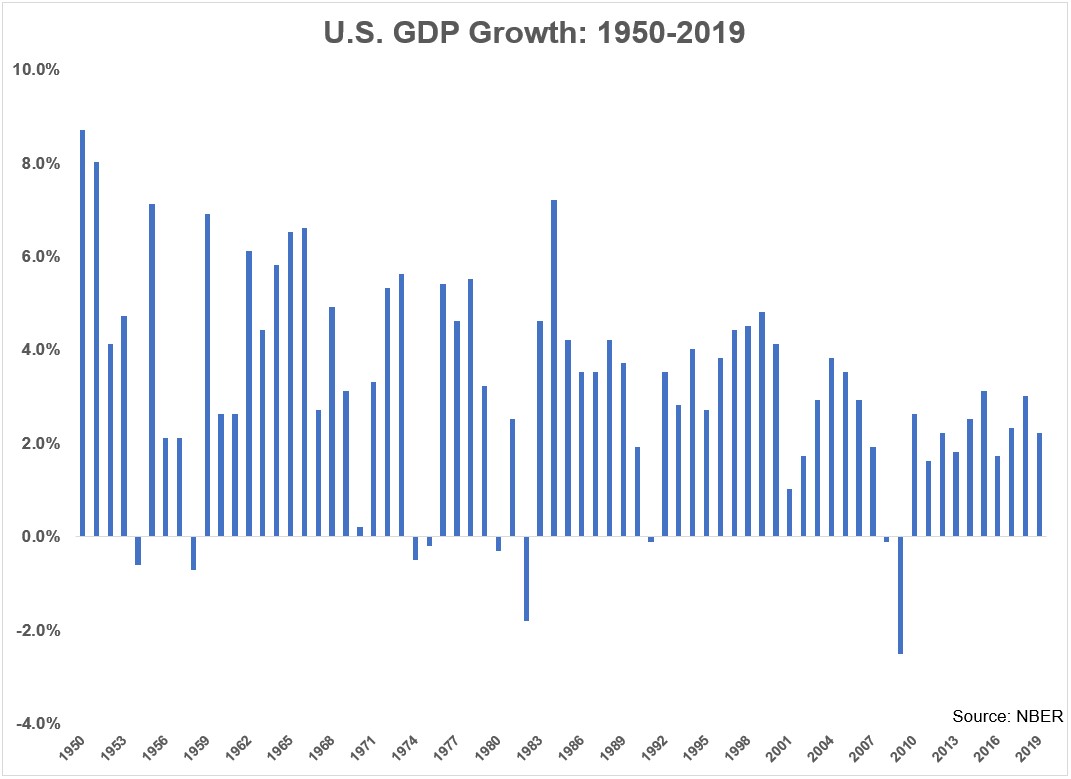 Economic forecasters don’t have the greatest track record of predicting the future but even the Fed is fairly optimistic about the economic outlook in the years ahead:

There’s a good reason growth will be so strong this year — it was weak last year. There is some mean reversion at play here.

But we’ve haven’t seen a snapback of this size in a long time. The last time year-over-year real GDP growth was over 6% in a single year was in 1984 when it was 7.2%.

You also have the vaccine coming online faster than most people thought was possible so the pent-up demand could cause the mother of all spending booms this year.

The fact that we went from the worst quarterly GDP drop in history in Q2 last year to the possibility of 8% growth in such a short window of time is simply unprecedented. And this isn’t just the vaccine and our insatiable need to consume.

The government pumped trillions of dollars into the economy.

This was a grand experiment in fiscal policy the likes of which we’ve never seen before during a recession.

Was this spending perfect? No, I don’t think any piece of government legislation will ever make everyone happy.

But did it work? That’s a resounding yes and I don’t see how you could argue otherwise.

The recovery from the 2008 financial crisis was way too slow for the simple fact that the government tried to rein in spending as opposed to helping people out. It’s the exact opposite this time.

And now that politicians know government spending can help end the pain from a recession faster than the alternative how could they avoid pulling that lever in the future?

In 2015, Bill McBride wrote a piece called Demographics and GDP: 2% is the new 4%. McBride created this chart to show the relationship between GDP growth and the changes in the labor force over time: 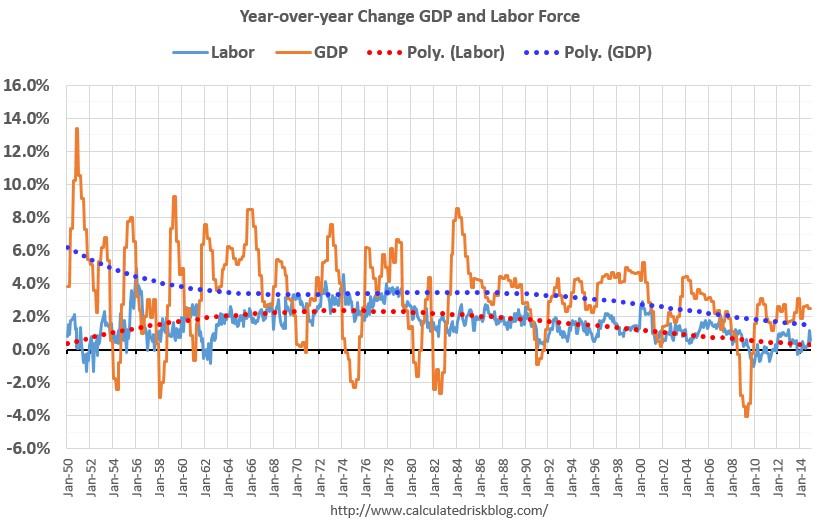 Growth was much higher in the 1950s and 1960s because of government spending on the wars in Vietnam and Korea. Other than that period, you can see a fairly strong relationship between the shrinking labor force and lower economic growth.

The idea here is population growth is a big determinant of economic growth. Productivity matters as well but here was McBride’s conclusion:

Other than the early period with a boost from government spending, the growth in GDP has been tracking the growth in the labor force pretty well.  The difference in growth between the dashed blue and red lines is due to gains in productivity.

The good news is that will change going forward (prime working age population will grow faster next decade).  The bad news is the political hacks will continue to ignore demographics.

Right now, due to demographics, 2% GDP growth is the new 4%.

Millennials coming into their prime working years will help now that my generation is the biggest demographic. But you also have baby boomers retiring at a rapid pace. There is nothing we can do right now about population growth. And if anything, we should expect that growth to continue slowing over the long-run. That’s what happens as nations get wealthier.

McBride’s first point is the one that matters here — government spending. If the government wants to create economic growth they can. That’s how we can go from 2% growth to 4% growth.

There are obviously risks to that policy choice — rising government debt levels and inflation being the biggest ones. There are a number of critics who despise government spending and don’t like the prospect of rising inflation.

But we now have a real world experiment that shows just how powerful government spending can be to economic growth. The government stopped a depression in its tracks and has now given the economy more potential for growth than it’s had in years.

You don’t have to like it but the U.S. government now has proof that they can create economic growth if there is the political will for it.

Predicting politics is probably harder than predicting economic data so it’s impossible to say if this will be a feature going forward.

But now that a large segment of the population has seen the power of increased unemployment benefits and checks in their bank accounts straight from the government, you better believe voters are going to be clamoring for this when the next downturn occurs.

Michael and I spoke about the economic implications of policy choices and more on this week’s Animal Spirits video:

1You’re never going to get an unemployment rate of 0% because people change jobs and that can take time.