For years retail investors have been called derogatory or condescending terms by the Wall Street pros.

Smaller retail investors aren’t perfect by any stretch of the imagination (no investor group is) but they are getting wiser. And I think they’re winning over the supposed “smart” money.

One of the most surprising outcomes of the cycle that’s been in place since the end of the Great Financial Crisis is the fact that retail investors seem to be winning more than ever over professional investors.

And I’m not just talking about how Wallstreetbets caused a 53% loss in the month of January for hedge fund Melvin Capital.

There are 3 big reasons retail is now regularly winning in the markets:

1. May Day. In the world of finance, May 1, 1975, is known as May Day.  It’s the day regulators deregulated stock trading commissions. Before this happened, there was no scale involved in trading a block of stocks. So trading 30,000 shares of stock as an institution incurred a charge that was 30 times larger than trading 1,000 shares.

And the average commission throughout the 1960s and 1970s up to that point was roughly 1% of every trade (and even more at many brokerages).

Charles Jones of the Columbia Business school looked at the history of trading costs in a research paper called A Century of Stock Market Liquidity and Trading Costs: 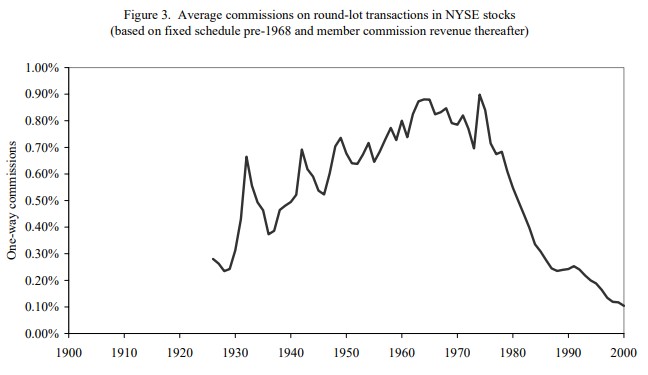 You can clearly see the impact May Day had on the cost of trading. Jones wrote his report in the early-2000s, but it’s pretty easy to piece together what happened next — the majority of trading platforms went to $0 trading commissions in 2019.1 Were we to extend this graph the line would now be on the floor.

Bid-ask spreads, the unseen cost of trading, have also come down substantially over the years: 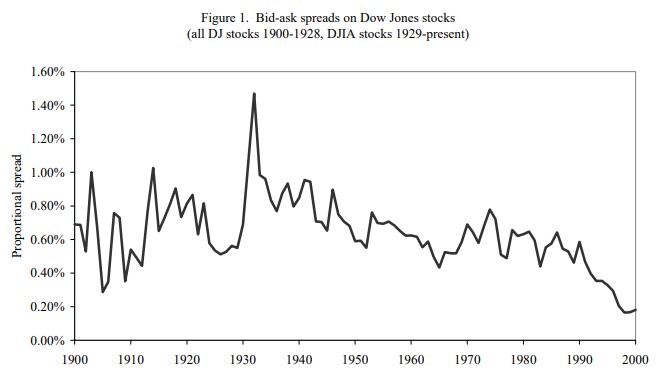 And this chart was before algorithmic trading and high-frequency trading existed so execution is cheaper today on this front as well.

When the index fund was introduced into the marketplace in the 1970s, it carried a sales charge of 8.5%. In the past, you would have to go to a bank branch or brokerage office to fill out paperwork to open an investment account. Now you can do so on your phone, fund the account immediately, and begin trading.

Free trading doesn’t necessarily come with no costs, as Robinhood customers have recently discovered, but it’s never been cheaper or easier for individuals to invest their money in the stock market.

2. The Growth of Index funds. Jack Bogle’s brainchild has been beneficial to individual investors in more ways than one. You can see the outpouring of flows from actively managed funds into index funds and ETFs in this chart from The Investment Company Institute: 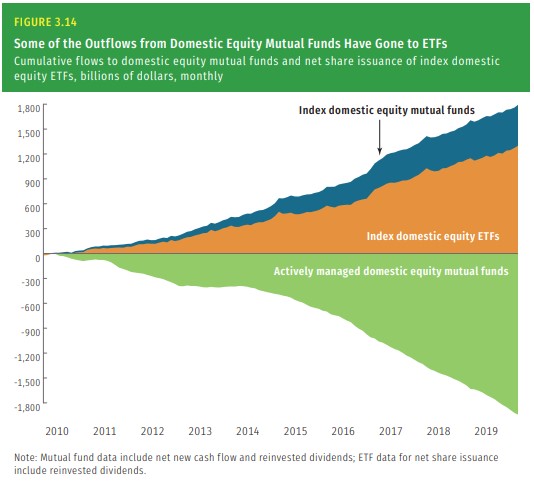 This shift has almost singlehandedly brought down the average expense ratio paid by mutual fund investors: 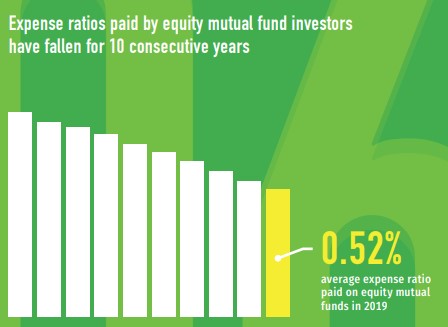 For as much press as trading apps like Robinhood have been getting in recent years, Vanguard and Blackrock have a combined $15 trillion or so in assets under management, the majority of which resides in low-cost index funds.

Not only have individual investors lowered their fees by investing in index funds, but they’ve outperformed the vast majority of professional money managers. Here’s the SPIVA scorecard from the middle of 2020: 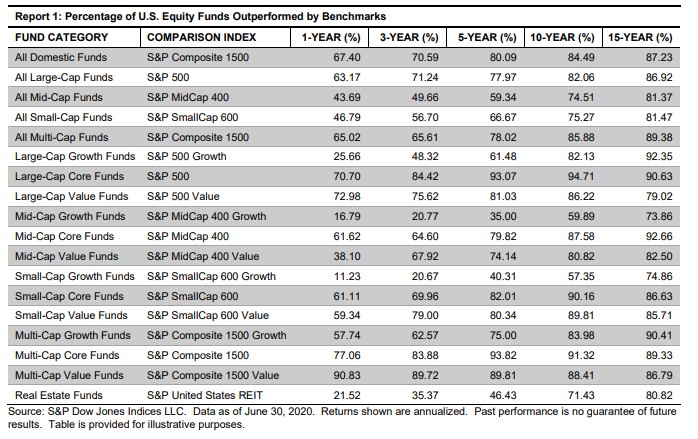 Look at those 15 year numbers. Investing in index funds would have put you in the top decile of performance in the fund universe.

Warren Buffett once wrote, “By periodically investing in an index fund, for example, the know-nothing investor can actually outperform most investment professionals. Paradoxically, when ‘dumb’ money acknowledges its limitations, it ceases to be dumb.”

Investing in index funds has turned much of the investing public from the “dumb” money to the smart money while the professionals have underperformed for years.

3. The bull markets Wall Street missed. I believe there is another reason individual investors have become so invigorated over the past few years beyond the lower trading costs and access to cheaper funds. In every huge bull market in history, Wall Street has played a role.

In the 1920s leading up to the Great Depression, there was an explosion of new fund structures, derivatives, and financial securities the likes of which the markets had never seen before.

In the dot-com bubble, Wall Street went absolutely nuts with IPOs and analysts were effectively performing pump-and-dumps with the research they were selling clients.

And, as everyone knows from The Big Short, Wall Street poured kerosene on the real estate bubble by relaxing their credit standards and creating toxic loan products that nearly destroyed the financial system as we know it.

Wall Street knows people relax their standards during a bull market so they rush in to supply more products and securities to soak up the speculative demand.

But a funny thing has happened during the current bull run. Wall Street has been noticeably absent. This was true in the first part of the bull market because so many people were skeptical of Wall Street’s ways after the 2008 crisis. And a flood of money into index funds led to one of the most boring bull markets in history. When a company like Vanguard is leading the charge, it’s much harder for Wall Street to make money from the masses.

And the massive bull market in crypto in 2017 basically occurred without big institutional money. It was mainly retail and individuals who drove crypto and reaped the gains. Only now are institutions getting involved in that space in a big way.

The seeds for the Wallstreetbets phenomenon were planted in the crypto craze of 2017 in many ways as people realized they didn’t need Wall Street to tell them what to invest in.

I’m not saying this will last forever. Wall Street will adapt and reload. And they’ll always find a way to take a cut one way or another.

But the rise of free trading, index funds and bull markets that can exist without the help of Wall Street have all proven the dumb money is not so dumb anymore.

Further Reading:
For Better or For Worse, This is a Young Person’s Market Right Now

1It is kind of ironic that Robinhood, the broker everyone is angry at right now, is the company that more or less forced the issue in terms of zero-commission trades.