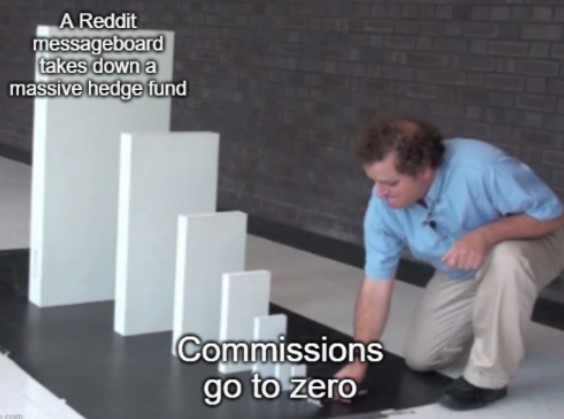 The Gamestop story is endlessly fascinating for a number of reasons.

There are elements of a mania in the daily price moves.

It shows certain day traders are becoming more coordinated in how they invest.

It shows the danger of shorting a stock where all of the shares outstanding are being sold short.

And, for better or worse, it proves the market, for the time being, is a young person’s game.

Just think about how this all transpired. Gamestop is not some hot IPO tech darling that added .com to their name or pivoted to crypto. It’s a mall retailer that has been slowly dying for years now.

And a bunch of hedge funds shorted the entire company: 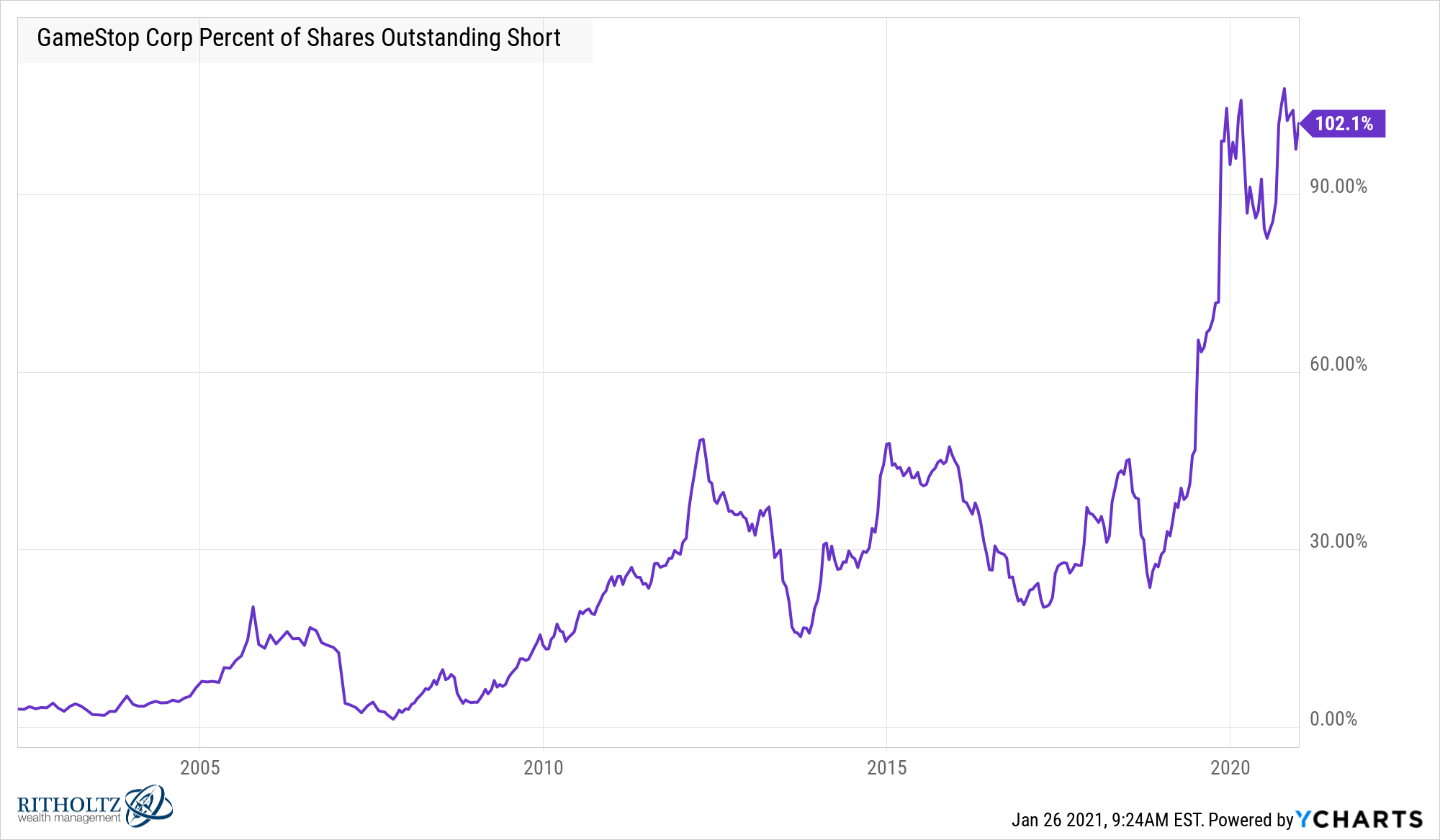 As of the latest reading in December, more than 100% of the shares outstanding were being sold short. Investors were betting this company was basically going to go out of business. But when so many investors are on the same side of the boat there are bound to be repercussions.

Some tech-savvy investors on a Reddit forum called Wallstreetbets decided maybe there was some value in Gamestop shares, or at the very least, there was a structural trade from the sheer amount of people shorting in the stock.

They effectively orchestrated one of the biggest short squeezes of all-time by buying call options and forcing those shorts to capitulate and buy back the shares they had shorted.

In the process, they took down a highly respected hedge fund, Melvin Capital, that was forced to seek outside capital after seeing losses in excess of 30% this year alone.

Can you imagine spending your entire career building a fund only to be taken down by a message board? This is unreal.

So what’s really going on here?

Are day-traders really getting smarter?

Does the dumb money now reside in the institutional world and not retail as so many pros once assumed?

It’s hard to draw conclusions from a story like this that has so many different elements involved.

But my one big take-away here is technology has leveled the playing field in a big way. This was a coordinated attack from a bunch of day-traders who knew exactly what they were doing. They planned this thing out, followed that plan and it worked precisely as they envisioned.1

And it all happened at a breakneck pace because technology is making everything faster.

Technology now touches so many areas of our lives and not just the markets. It’s changed the way we shop, communicate with one another, where we work, how we work, the way we socialize, how we date, how we consume content and how we entertain ourselves.

And when these regime changes happen, it’s always the young people who are the most capable of adapting with the changing times.

Following the last technological revolution in the 1990s and the ensuing bursting of the dot-com bubble, Michael Lewis wrote about this idea in his book Next: The Future Just Happened:

But it does seem to me that when capitalism encourages ever more rapid change, children enjoy one big advantage over adults: they haven’t decided who they are. They haven’t sunk a lot of psychological capital into a particular self. When a technology comes along that rewards people who are willing to chuck overboard their old selves for new ones—and it isn’t just the Internet that does this; biotechnology offers many promising self-altering possibilities—the people who aren’t much invested in their old selves have an edge.

A child still has time to save himself. To a child, being on the wrong end of the trend is not a sign that it’s time to dig in and defend the old position; it’s a signal to cut and run. Progress depends on these small acts of treason.

It’s much harder to commit those small acts of treason when you’re older and more set in your ways. Experience has pros and cons.

This is why it’s going to be very difficult for the legendary investors in their 60s who we’ve all been worshipping for years to predict what will happen in this new world of technology, fiscal policy and Federal Reserve intervention. These people are experts on an earlier version of the world.

Now, I’m not suggesting this will last forever either.

Regime changes don’t necessarily render experience useless. That experience will matter again at some other point in the cycle. It’s just that young people seemingly have an edge right now because they don’t have as many preconceived notions of the way the world should work.

It’s also worth pointing out the main character in Lewis’s book was a 15-year-old boy named Jonathan Lebed. Lebed was charged by the SEC for using the Internet to promote stocks:

On September 21, 2000, the U.S. Securities and Exchange Commission settled its case against Jonathan Lebed. The SEC’s press release explained that fifteen-year-old Jonathan—the first minor ever charged with stock market fraud—had used the Internet to promote stocks from his bedroom in Cedar Grove, New Jersey. Armed only with accounts at AOL and E-Trade, the kid had bought stock, then, using “multiple fictitious names,” posted hundreds of messages on Yahoo Finance message boards recommending that stock to others. He’d done this eleven times between September 1999 and February 2000, the SEC said, each time triggering chaos in the stock market. In advance of the chaos he’d left sell orders in the marketplace, in case his shares rose in price. Each time they did. The average daily trading volume of the small companies he dealt in was about 60,000 shares; on the days he posted his messages volume soared to more than a million shares. More to the point, he’d made money. Between September 1999 and February 2000 his smallest one-day gain was $12,000. His biggest was $74,000. Now the kid had agreed to hand over his illicit gains, plus interest, which came to $285,000.

Lewis was appalled the SEC went after this 15-year-old kid. I tend to agree with him. The professionals and other white-collar criminals do far worse.

However, it wouldn’t shock me if the SEC starts looking into the Wallstreetbets crew much in the same way. While today’s traders are more sophisticated than the message board traders of the 1990s, they are still promoting stocks in an aggressive manner. That’s sure to draw some attention from regulators.

And I’m guessing the hedge funds are going to be shouting their complaints from the rooftops for regulators to step in here.

I’m not a legal expert on these matters so I don’t really have much of an opinion.

But it wouldn’t surprise me to see the old guard go after the new guard here to exact some sort of revenge.

I don’t know how much longer this can last.

It seems like we’re having mini-manias in different securities or asset classes on a weekly basis.

All I know is in these types of fast-moving environments, young people have the first-mover advantage.

It will be interesting to see what happens as that advantage slowly fades away the further along we get in this cycle.

1This Bloomberg article by Brandon Kochkodin provides the entire story if you’re interested in the background.