If it feels like we’ve been debating a stock market bubble in the U.S. for a decade it’s because we have:

The longer this goes the louder the chorus of bubble-callers will get. And maybe they’ll be right eventually. Bubbles are basically an American past-time.

We can debate all we want about whether we’re in a bubble or not and there are compelling arguments on each side.

But there are plenty of other markets that are certainly not in a bubble. Here’s my list:

Emerging markets. Not a bubble. Surprisingly, emerging markets have now more or less caught up to the S&P 500 over the past 5  years: 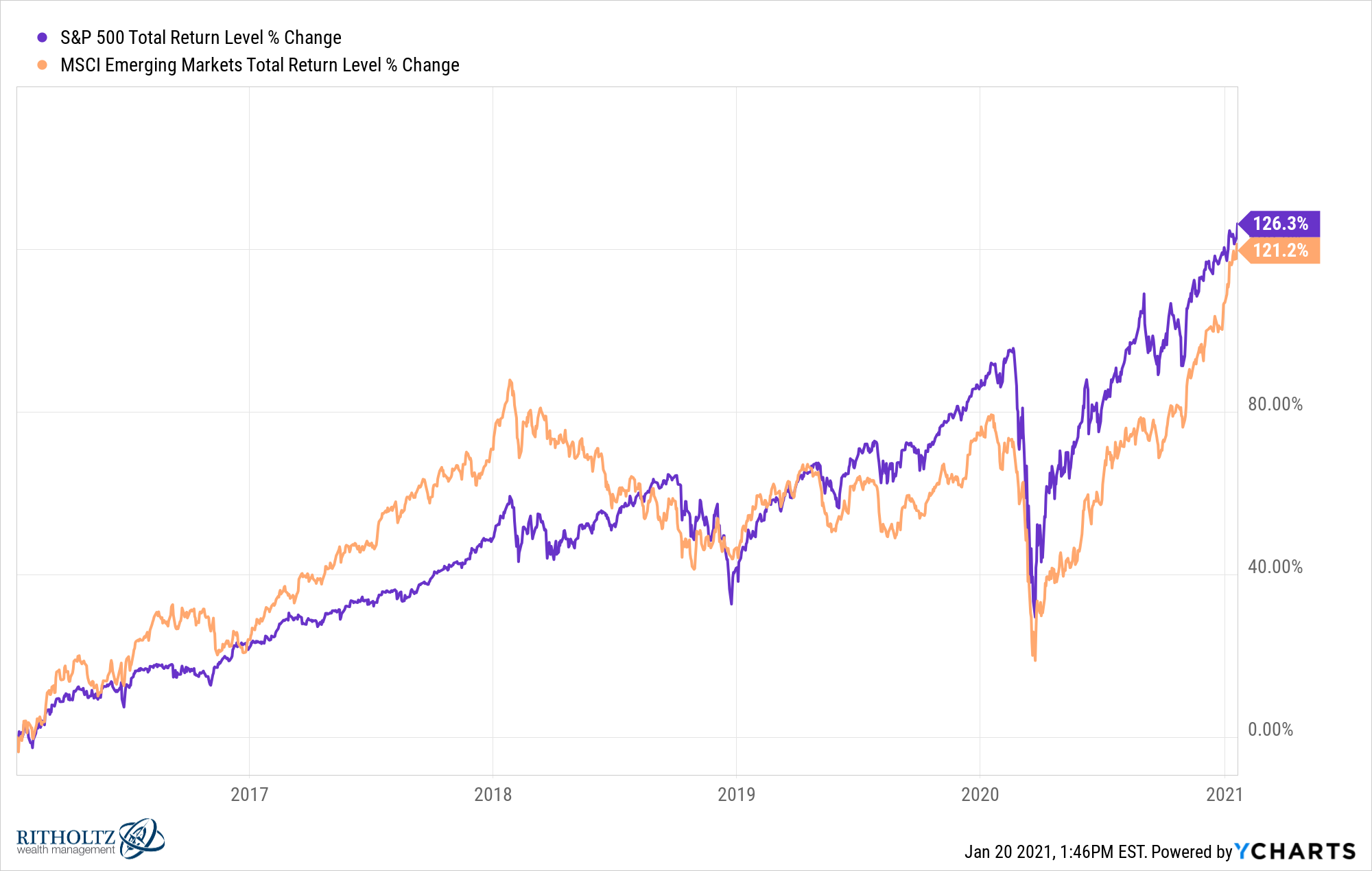 But look at the 10 year returns: 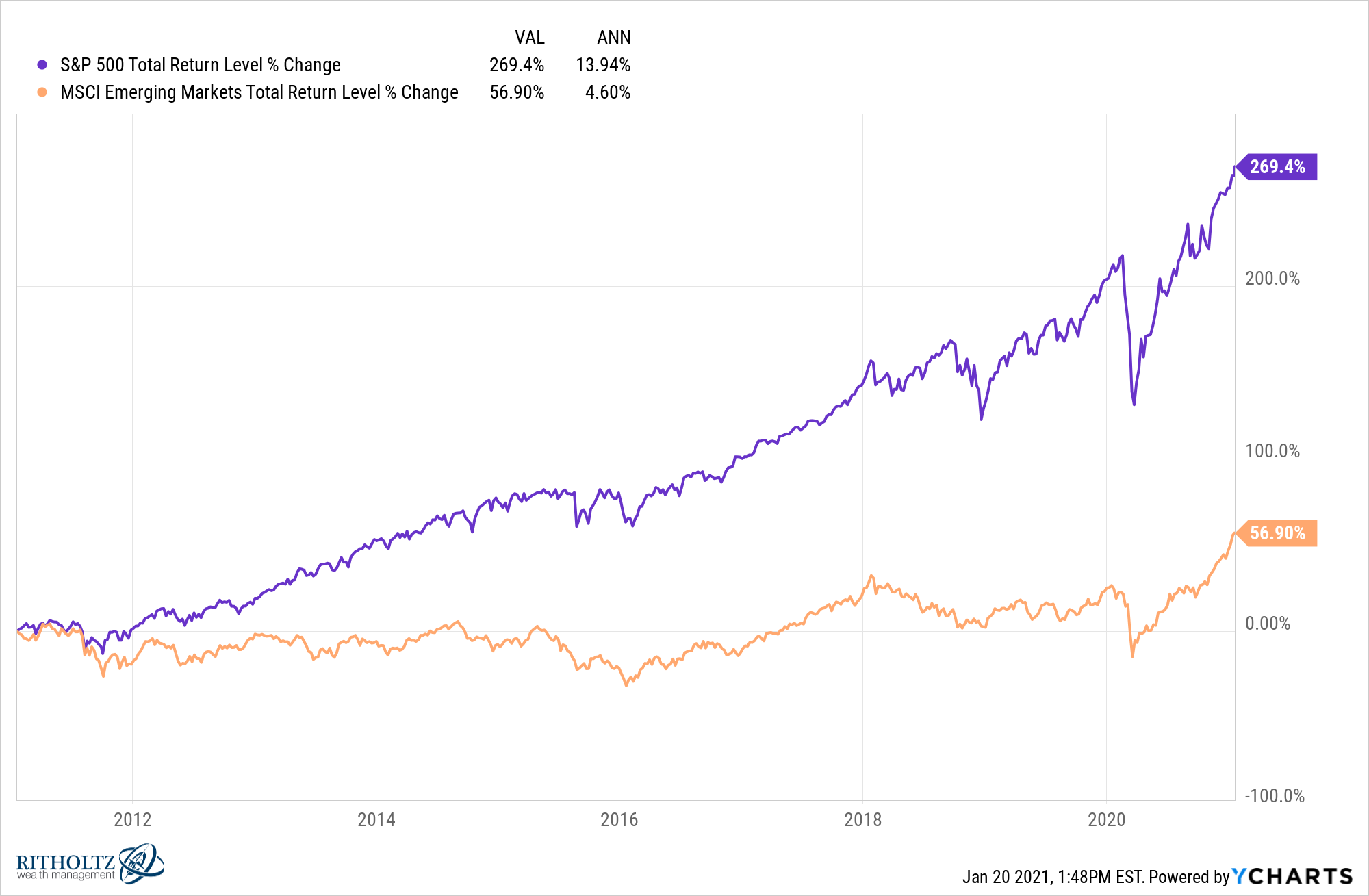 On a price basis, the MSCI EM Index has just this year surpassed the 2007 peak: 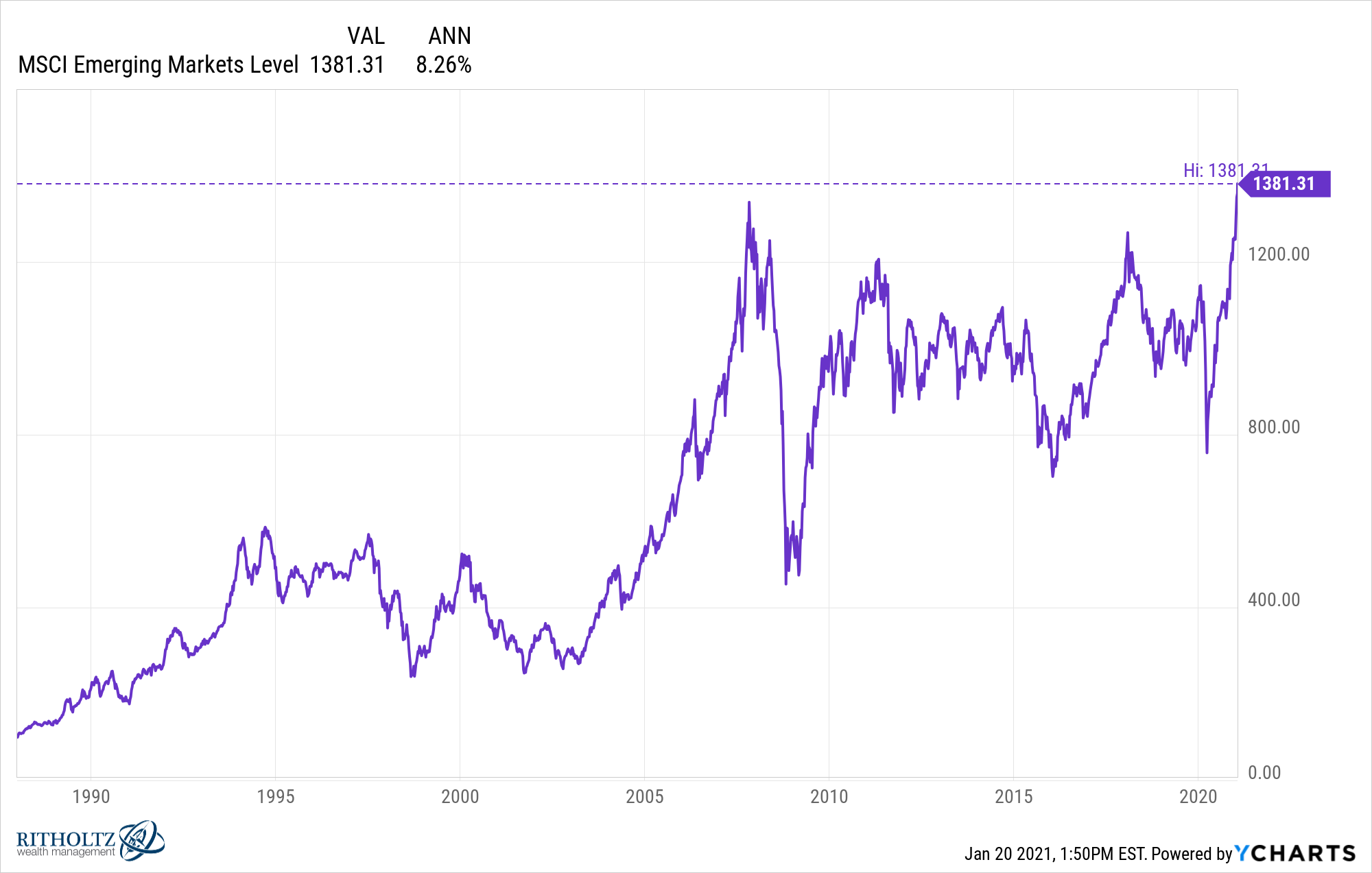 European stocks. Not a bubble. European stocks have had an even worse run than emerging markets since 2007, underperforming even the aggregate U.S. bond market: 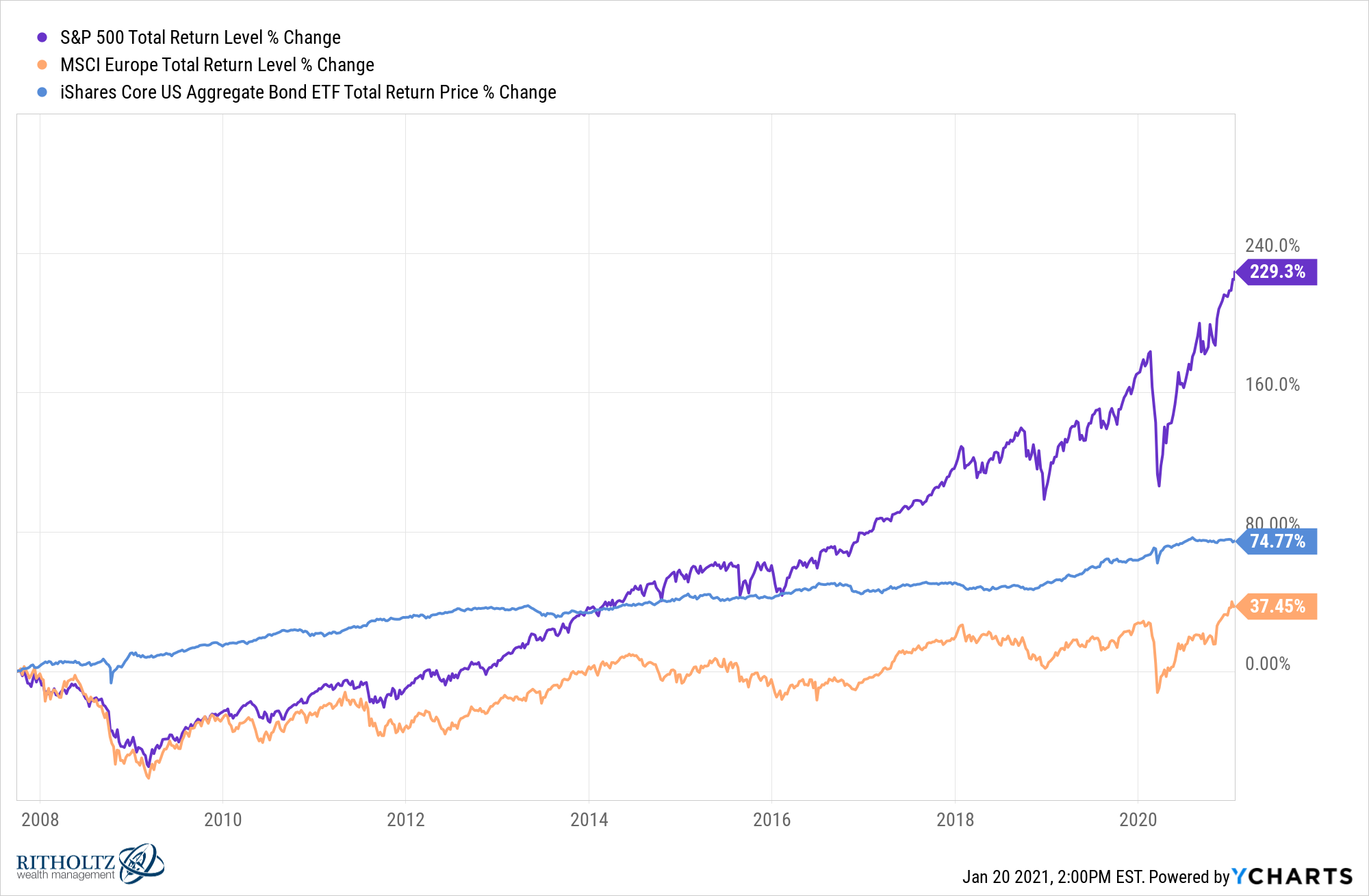 This is the past 10 years of returns for the 5 biggest economies in Europe compared to the S&P 500: 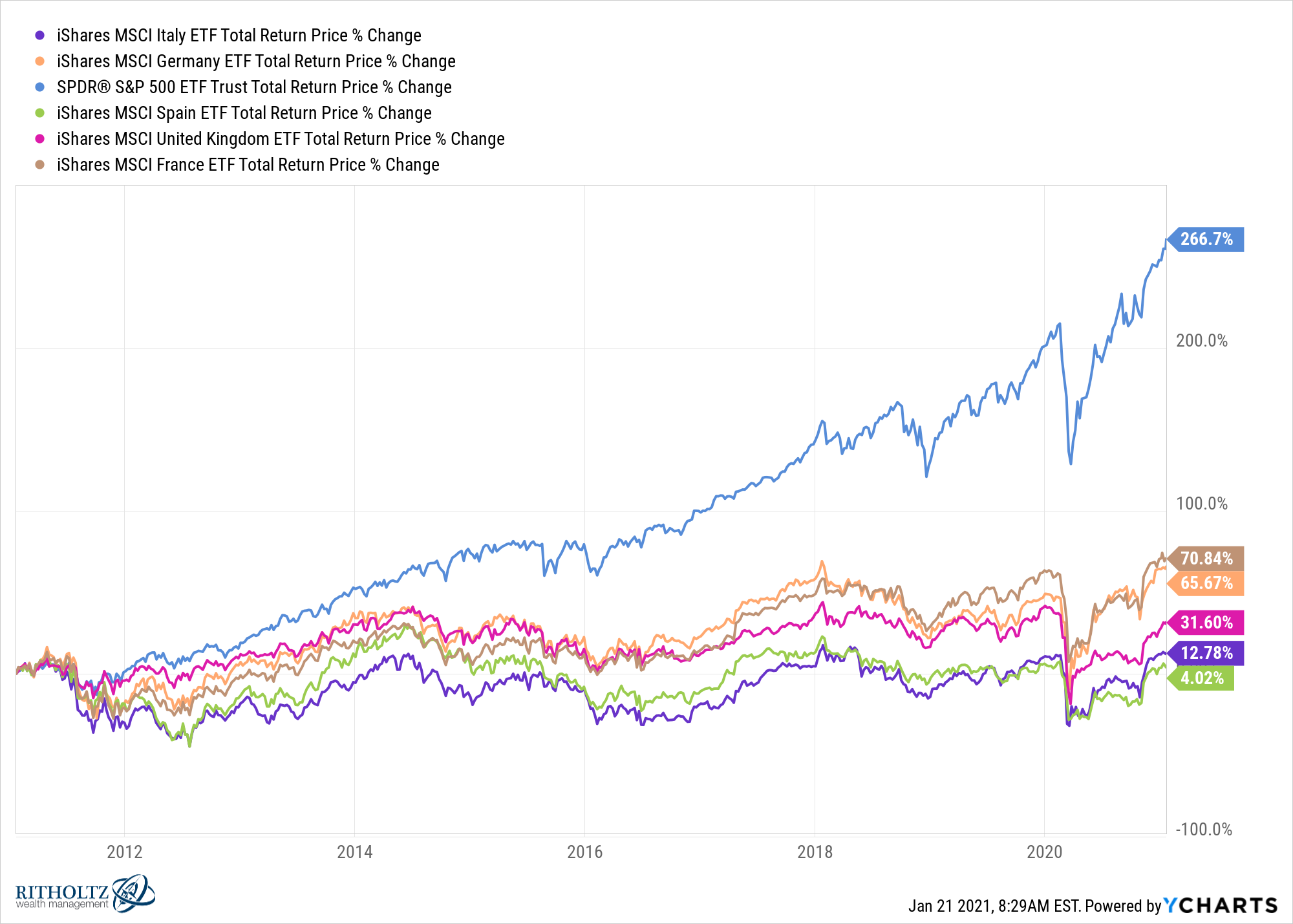 No one likes European stocks right now and it shows based on their returns.

Japanese stocks. Not a bubble. The total returns for the MSCI Japan Index since 1990 are 45% or 1.2% per year through the end of 2020. Let me repeat that — the total returns over a 30 year period in one of the largest developed economies on the planet are around 1% per year.

I’m not even sure what it would take for Japanese stocks to enter bubble territory these days. 30% annual returns for a decade?

Japanese stocks have performed better in recent years but have still badly underperformed the S&P 500: 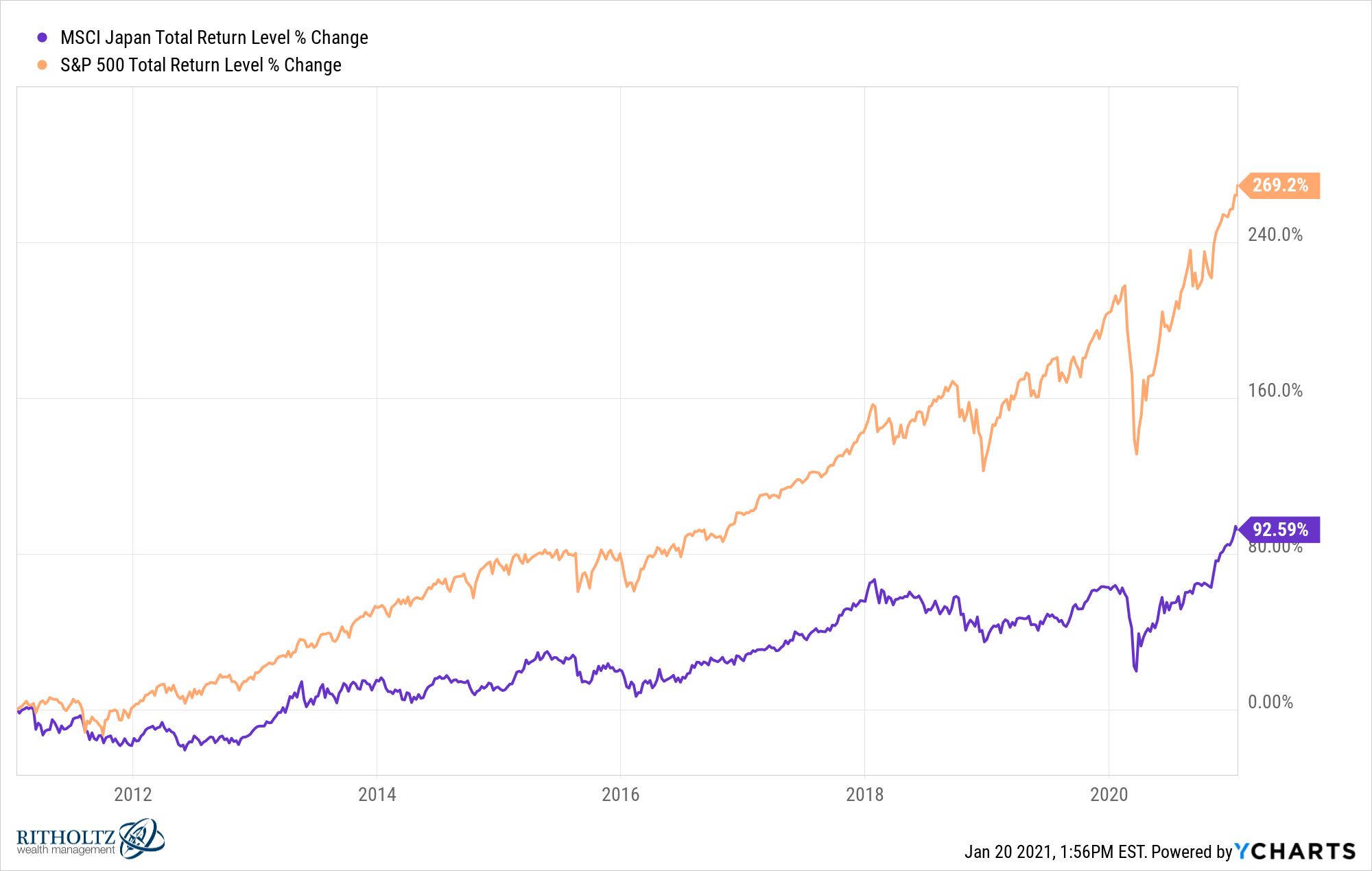 It’s hard to believe Japan was the biggest stock market in the world for a time in the late-1980s, making up 45% of the global market cap. Japan now makes up around 8% of the total.

Value stocks. Not a bubble. Growth stocks have been beating the pants off value stocks for a number of years now: 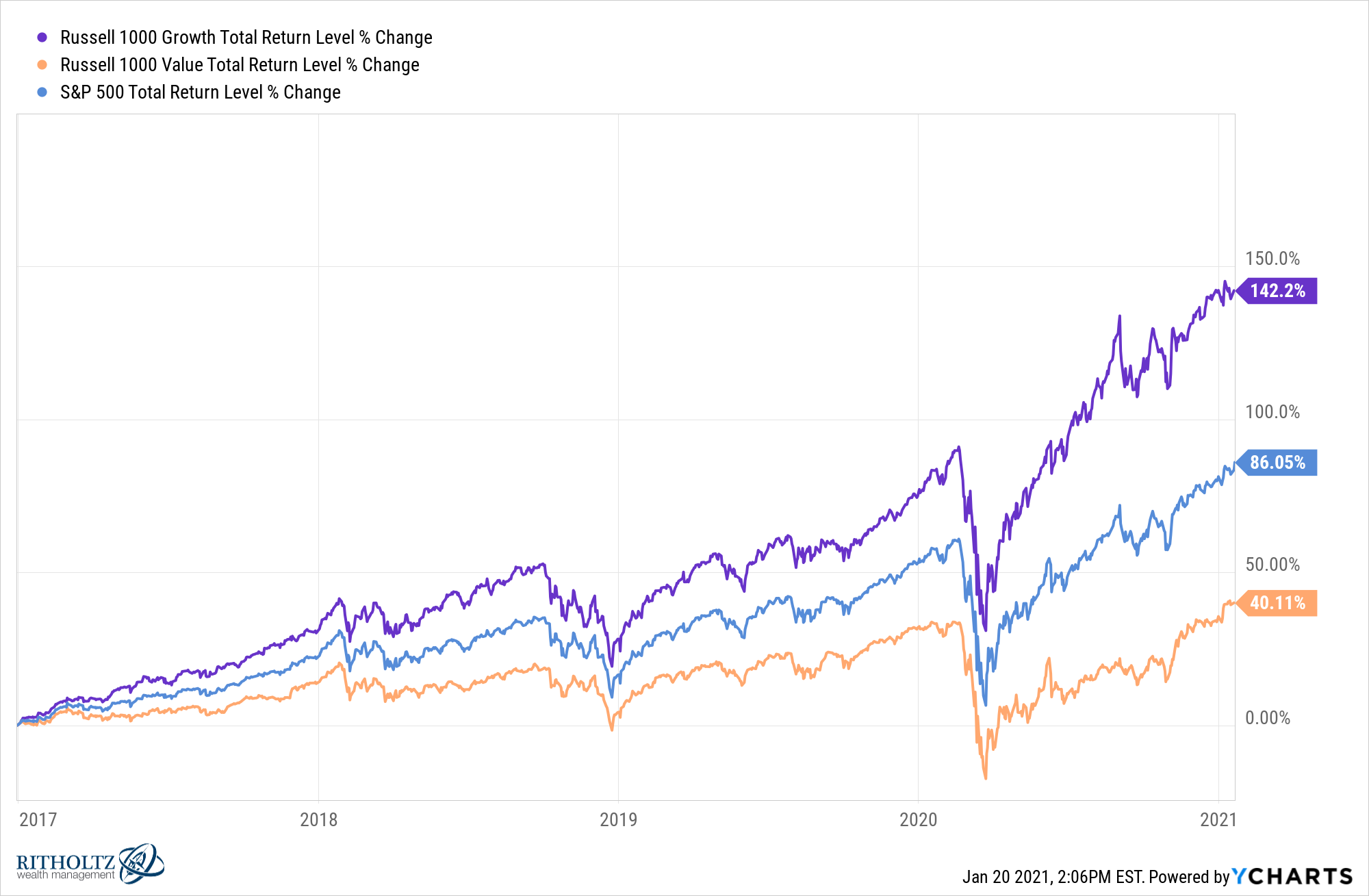 The Russell Growth and Value indexes aren’t perfect proxies to measure these factors but they do have data going back to 1979. Surprisingly, growth is now ahead of value going back to that inception date: 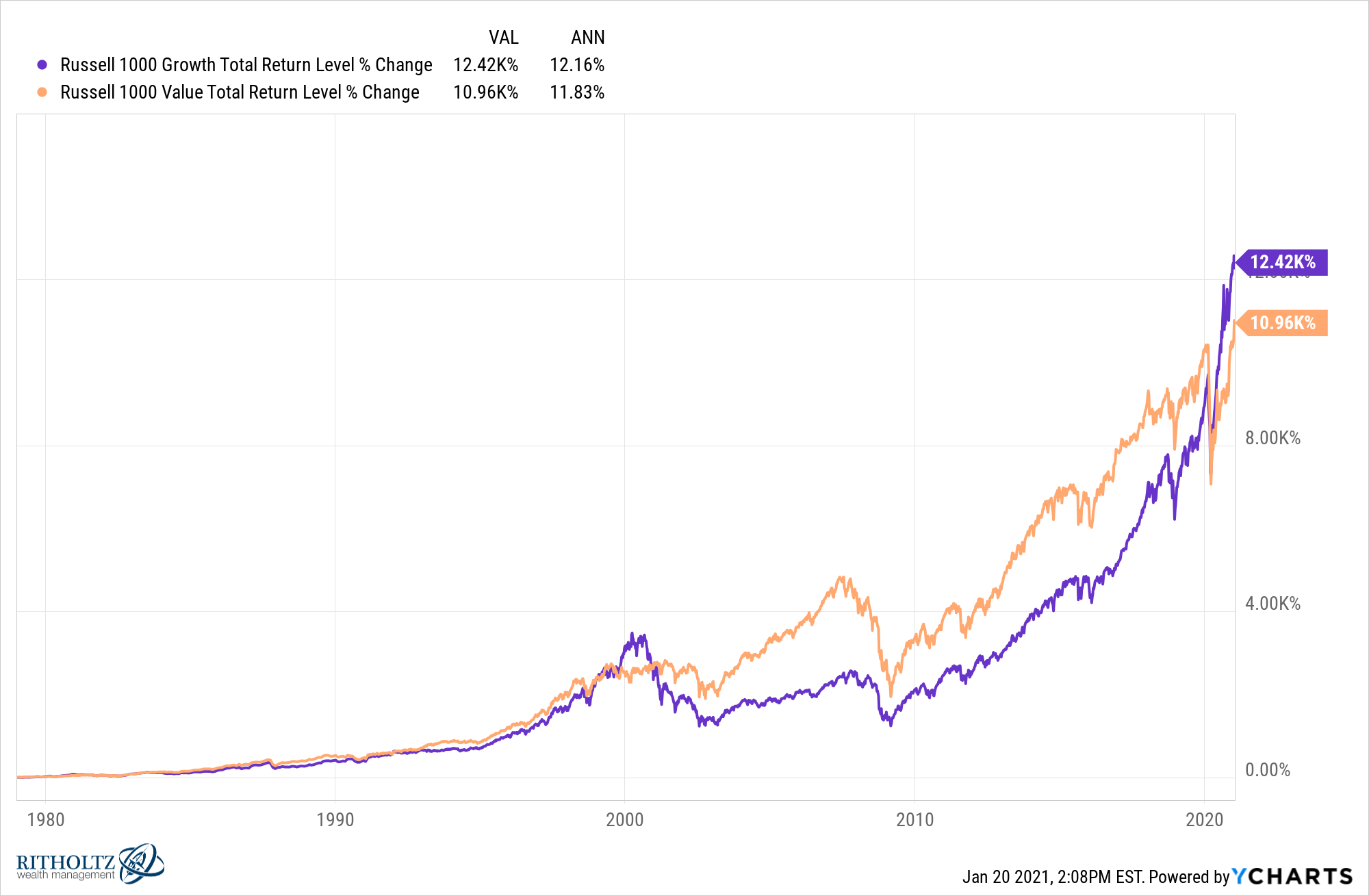 Value stocks have experienced a decent run for the past 4-5 months but that’s certainly not enough to make up for a dreadful 4-5 years of relative returns.

Energy stocks. Not a bubble. Energy stocks have been on a tear of late, as the sector is up more than 50% since the start of November. One of the reasons they’re up so much is because they’ve been down so much for so long.

The sector is basically breakeven, giving investors a total return (including dividends) of just 9% since 2007. And the entire sector still resides in a 44% drawdown from 2014 levels: 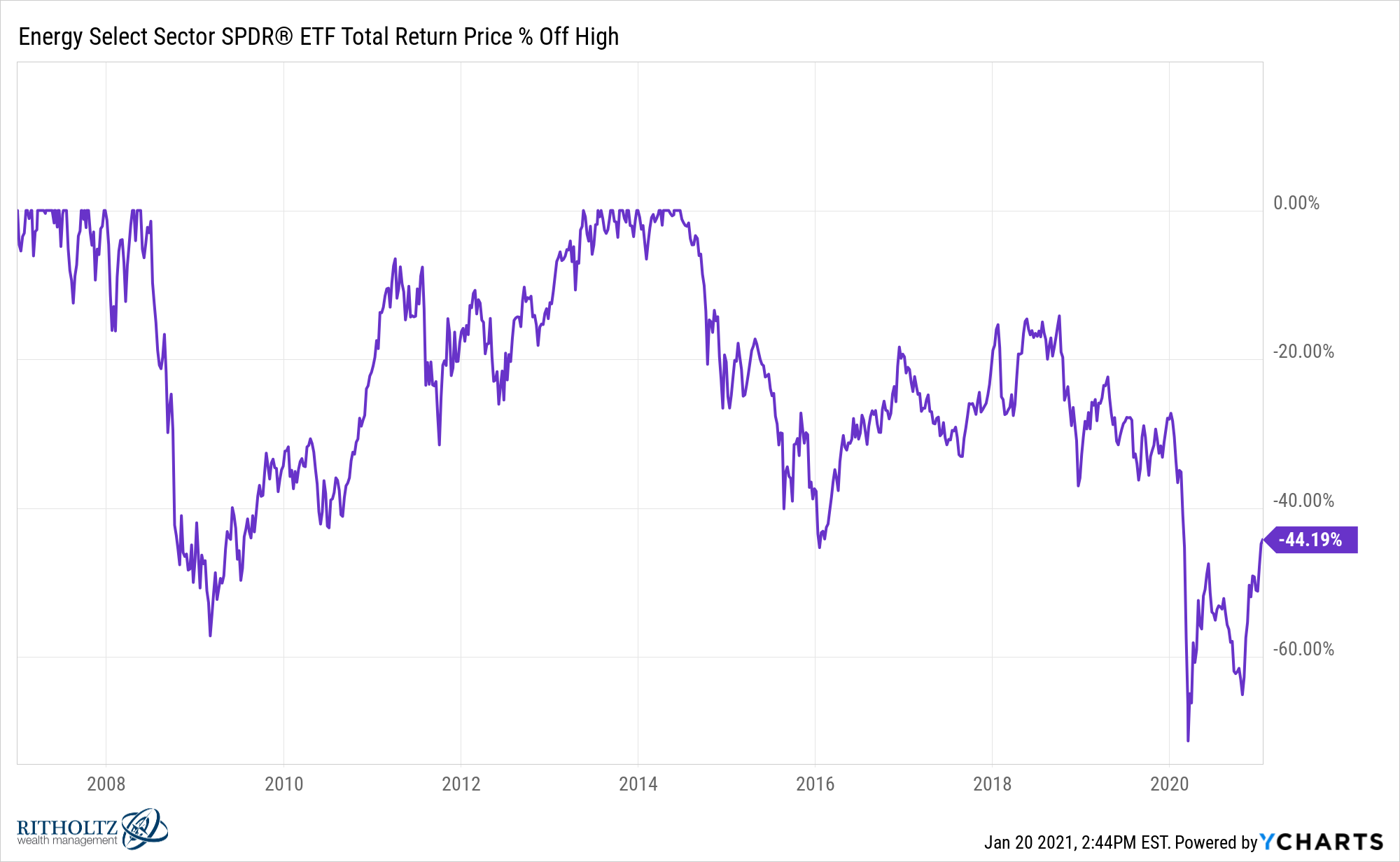 Energy stocks were probably in a bubble in 2007 when oil was $150 a barrel. When oil hit -$37 a barrel last April, I suppose that has to be the complete opposite of a bubble.

Financial stocks. Not a bubble. I’m cherry-picking the start date here but look at financial stocks versus the S&P 500 since 2006: 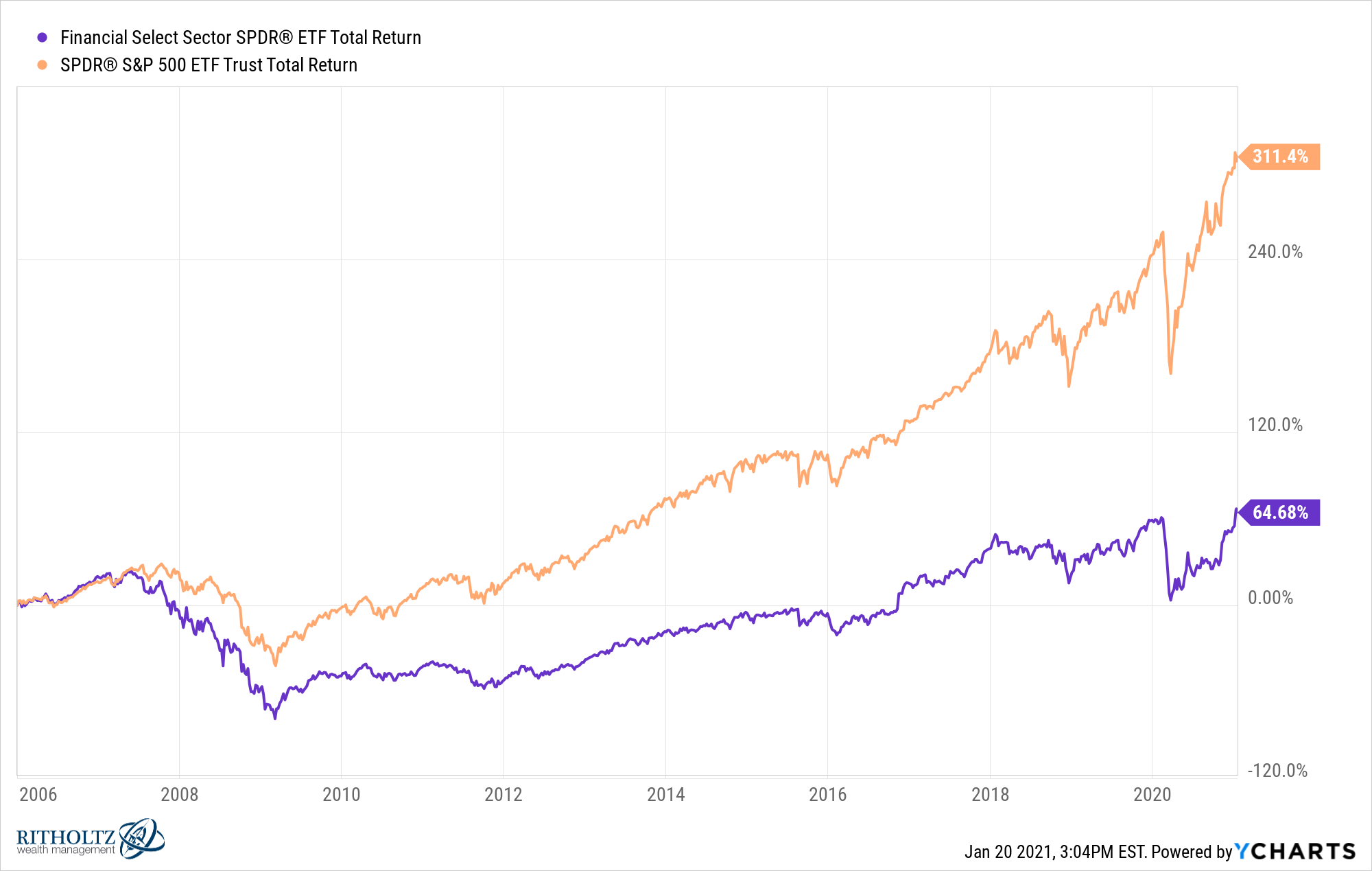 This obviously has a lot to do with the Great Financial Crisis but even over the past 3 years financials have badly lagged the overall market: 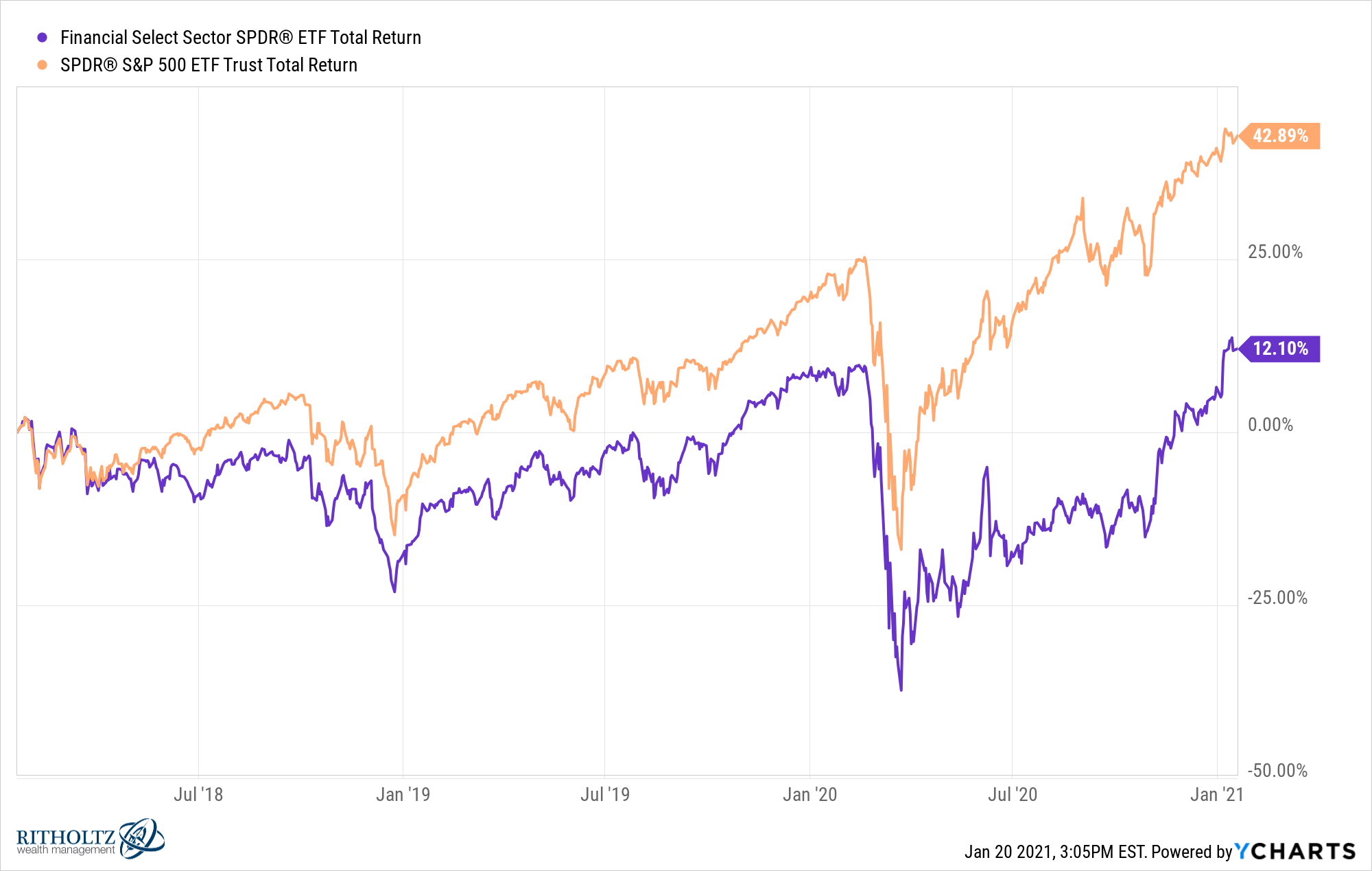 Like energy stocks, financials are coming on strong in recent months. Goldman Sachs went nowhere for a number of years and is now up 50% or so since October. But financial stocks have been working off the financial crisis hangover for some time now.

Of course, there are reasons all of these markets aren’t in bubbles. Assets don’t underperform like this if the fundamental story is wonderful.

But if you want to find value in today’s market, you’re going to have to kiss some frogs.

U.S. stocks are expensive for a reason. Emerging markets, Europe, Japan, value, energy and financials were left behind for a reason.

What happens from here depends on what’s priced in for each of these markets.

Further Reading:
How to Invest in a Bubble