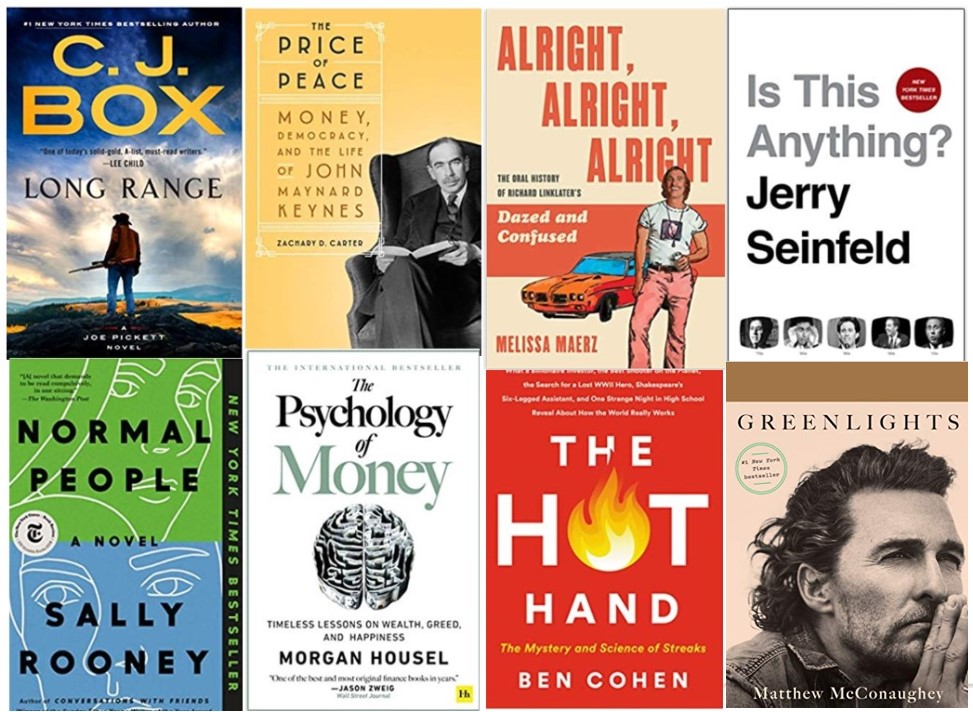 My favorite books from a year in which my reading went into a bear market for 2-3 months during the onset of the pandemic.

This was hands down my favorite book of the year and also the biggest upset based on my expectations going into it. I’ve always considered McConaughey to be a “that guy” but he is an unbelievable storyteller. I read this book in 2-3 sittings and could not put it down.

The book was created from a collection of journal’s McConaughey has kept over the years. I like the way he framed his reason for writing stuff down:

I also loved the chapter about reinveting himself to go from rom-com movies to more serious roles:

Then they offered $8 million. Nope. They then offered $10 million. No, thank you. Then $12.5 million. Not this time, but…thanks. Then $14.5 million. Hmmmm…Let me reread it. And you know what? It was a better script. It was funnier, more dramatic, just an overall higher quality script than the first one I read with the $5 million offer. It was the same script, with the exact same words in it, but it was far superior to the previous ones. I declined the offer. If I couldn’t do what I wanted, I wasn’t going to do what I didn’t, no matter the price.

Some good life lessons but his ability to tell a good story was a revelation. I’ll take McConaughey’s life philosophy over the stoics any day.

Is This Anything? by Jerry Seinfeld

Another book of collected writings, this one includes every joke Seinfeld has written down since 1975. I love the way his brain works.

This one killed me:

I think one killer thing for everybody in gym class was The Rope. What was that about? It didn’t fit in with the whole rest of the little fitness program, did it? Few jumping jacks, little volleyball, and then North Vietnam POW escape training. “Come on, get up that rope.” “Coach, do I need to practice this? I don’t think I’m ever going to date Rapunzel.” Remember that big knot on the bottom of the rope? That’s in case you lose your grip at the top, the knot stops you before you hit the ground. Six inches between the knot and the floor, that’s your safety zone. And if you ever did slide down the rope, they could cook marshmallows from the flames coming off your thighs. What kind of rope was that? It was like from a Spanish pirate ship. Some kind of super-heat friction twine? Did they do tests? “No, we’re not getting enough redness and inflammation from this type of rope. We need something with like little spiny things coming out the sides.”

I was reading this book in bed last week and was laughing so hard I woke my wife up. The best part is you can pick it up and put it down and never really lose your place because all the jokes are good.

The Psychology of Money by Morgan Housel

At a conference a few years a few of us financial bloggers were having dinner. Somehow we ended up discussing where to find the best subject matter to write about.

One person suggested it was academic journals and peer-reviewed research papers. Morgan countered that the best writing topics almost always come from sources outside of anything investment-related. It was stories and analogies outside the world of finance that were the best way to explain this stuff.

That’s exactly what he does in this book.

He’s the best storyteller we have in the world of finance. There are plenty of us who writes stuff about finance but I consider Morgan an actual author on the topic.

The story about how some mice took down a German tank in WWII was probably my favorite of the entire book.

The Big Picture by Ben Fritz

This book is a couple of years old but I was introduced to it by Ryen Rusillo’s interview of Fritz and dove in immediately.

I’m a huge movie buff so I love learning about the way streaming, a growing audience in China and some head-scratching decisions from movie execs have changed the movie business and how it will shape the future.

I couldn’t believe the movie studios used to make $15 on the sale of a $20 DVD back in the day and how it more or less prevented them from seeing the oncoming Netflix train.

This one is for fans of Dazed and Confused only but it’s one of my all-time favorite movies so I was the target audience for this one.

It’s not only an oral history on the making of the movie but also gives you a better understanding of the business and creative dynamics at play on a film set.

Richard Linklater is one of my favorite movie-makers so learning more about his creative process was enlightening.

One of my biggest complaints about biographies is they tend to be far too long and contain too much useless information. I just want some background information, the best stories, anecdotes and lessons, not go through an entire extended family tree dating back centuries.

This book basically takes out these complaints and shares only the important stuff about Abraham Lincoln, Teddy Roosevelt, Franklin Roosevelt and Lyndon B. Johnson.

It’s four biographies for the price of one. Goodwin also does a nice job showing the similarities and differences in their leadership styles.

The Price of Peace by Zach Carter

This might be the most impressive book I’ve read in years. John Maynard Keynes is the main character but its part history, part economics and part biography.

I always knew Keynes was influential but never realized how involved he was in influencing many of the biggest economic decisions that were brought about because of World War I, the Great Depression and World War II.

This book must have included an incredible amount of research.

I’m not going to lie — I’ve bought a thing or 12 from Banana Republic over the years.

This book by the husband and wife who founded the company before eventually selling to The Gap is one of the better books I’ve read on the ups and downs of the life of entrepreneurs.

It’s a quick read too.

This is ostensibly a book about the hot hand fallacy in basketball but it’s also full of stories in other areas of life about streaks.

There’s a great story about how Shakespeare ripped off a number of his best plays during a plague (hits pretty close to home this year) but the chapter on the guy who created NBA Jam brought me back to my younger days:

By the time Turmell’s chicken sandwich with cheese was ready, Rivett had suggested an idea they both knew immediately was brilliant: on-fire mode. They sketched out the details over lunch, walked back to the Midway office, and implemented on-fire mode that afternoon. If a player made two shots in a row, they decided, then he would be heating up. If he made three shots in a row, then he would almost certainly make his next shot. It didn’t matter what kind of shot it was. The ball would burst into flames. He would be on fire! This is why Mark Turmell’s arcade game was so addicting. Our minds are programmed to search for patterns. He simply programmed a tendency of the human brain that already existed into NBA Jam. We see one, two, three shots in a row and intuitively seek out the fourth. We crave order in chaos. Turmell made sure there was a reward for that behavior. He turned the hot hand into NBA Jam’s superpower.

There’s also a great story in the book on DFA’s David Booth for the investor crowd.

My fiction reading suffered this year because of the pandemic but here are a handful of favorites:

This is the book the series on Hulu was based on (which I also enjoyed). It’s not my typical genre but Rooney’s tale of young love between Marianne and Connell was very well done.

The way she wrote dialogue without using quotations was unique (as far as I know) and a welcomed change to more formally written books. It just…works.

I love that f*ckin’ Flowers (that’s what his law enforcement colleagues lovingly call him) and his whacky detective cases.

I read every book in this series (which now numbers a dozen and counting) right when they come out. One of my favorite detective series right now.

Masked Prey by Sandford, which is where the Virgil Flowers series spun off from, was good as well.

Sandford has been writing these books for a long, long time and his ability to keep them interesting all these years is impressive.

I go back and forth on my favorite fiction series1 but Box’s annual novels about a game warden in Wyoming are always in the mix.

Joe Pickett is a wonderful protagonist (I think this would make a great Netflix series) but his sidekick Nate Romanowski might be my favorite book character right now.

Let me know what your favorites were so I can continue filling up my Kindle.

Further Reading:
The Best Books I Read in 2019