In his book Manias, Panics, and Crashes: A History of Financial Crises, Charles Kindleberger outlines the five phases of a bubble. This is my summation of these phases:

Phase One: Displacement. An event or innovation occurs that sharply changes expectations. This phase is typically grounded in reality and good intentions.

Phase Two: Expansion. This is the stage where the narrative takes hold and people begin bidding up asset prices.

Phase Three: Euphoria. By this point, all bets are off. Everyone assumes they can get rich easily and very quickly. Risk is taken with abandon and nobody worries about the hangover in the morning. During the dot-com bubble, this is the point where people decided they could make more money day trading IPOs than going to their day job. Euphoria makes people think the good times will last forever, or at the very least, they won’t be the ones holding the bag when it turns.

Phase Four: Crisis. The inevitable other side of any boom is a bust. This is the phase where the insiders begin selling, and panic buying quickly shifts to panic selling.

Phase Five: Contagion. Just as prices overshoot to the upside from euphoria, they often overshoot to the downside once the contagion of bad news spreads and people think things will never get better again

These five phases can be viewed through the lens of every asset bubble in history because human nature is the one constant in the markets.

The problem for investors is that you can never know how long each phase will last in real-time. There is no iPhone alert to let you know when the period of euphoria is cresting and coming to an end.

You don’t have to look too far to find people warning of a tech bubble these days. Here are the top news results for a simple Google search for the term ‘tech bubble’: 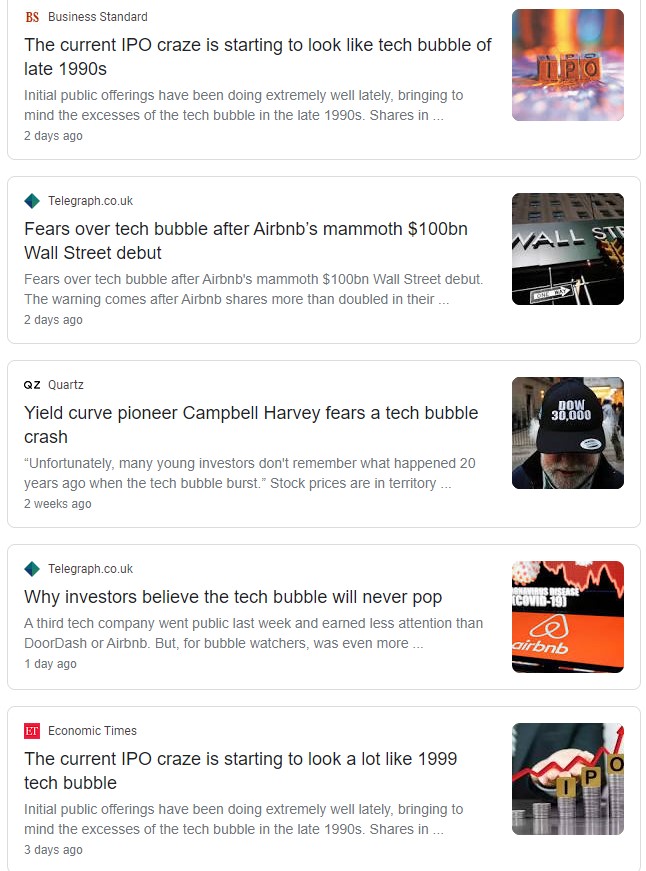 Tech stocks have been dominating in both the public and private markets for years now. IPOs are doubling on the first day of trading. It feels too easy.

The problem is people have been calling the tech sector a bubble for almost a decade. 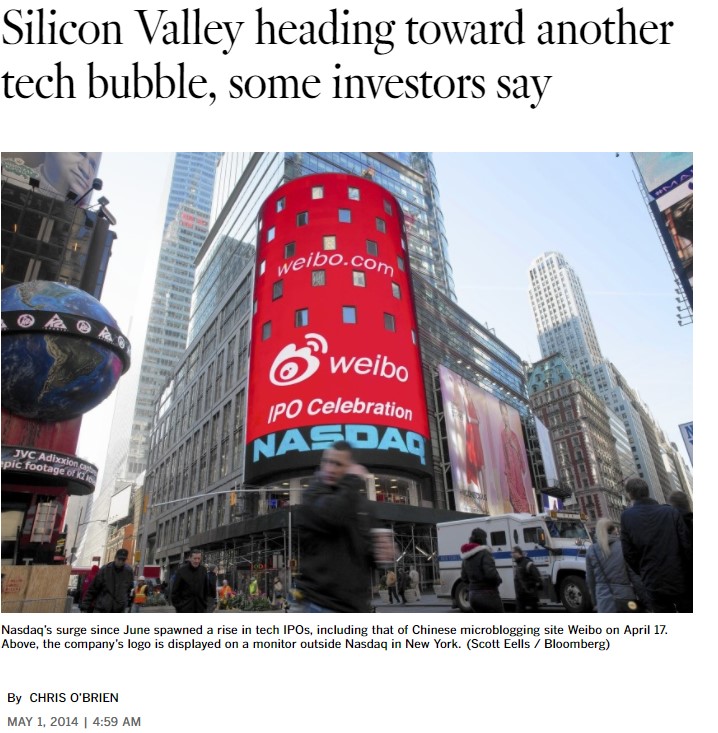 And here’s Mark Cuban in 2015 for good measure: 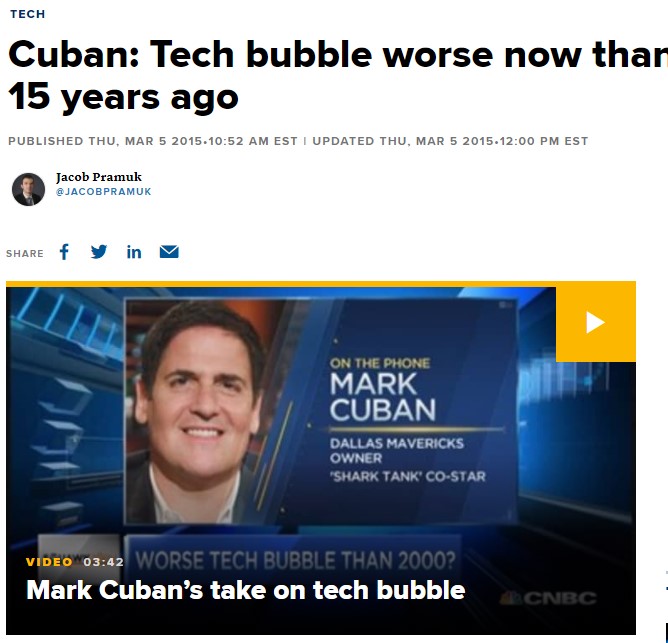 I could have kept going. The list of stories proclaiming a bubble in tech over the past 10+ years is longer than the number of Detroit Lions’ coaches during my tenure as a fan.

Reading The Big Short has likely cost investors millions (billions?) of dollars in lost gains because so many people want to call the top before the next bubble pops. Unfortunately, profiting from a perceived bubble looks easier in a Michael Lewis page-turner than the real world.

Of course, maybe people are right this time. Maybe we are in a tech bubble. The pandemic has pulled forward so much demand for technology that reality can’t possibly live up to the expectations currently embedded in the prices for some of these companies.

Cliff Asness once remarked, “The term bubble should indicate a price that no reasonable future outcome can justify.”

For some tech stocks today this is probably the case. But others will likely be able to grow into their expectations through improved fundamentals and a growing base of recurring revenues.

There are some similarities and differences between now and 1999.

Just as we saw in the late-1990s, IPOs are going nuts, retail day trading has experienced a renaissance, growth stocks are crushing value stocks, tech companies with no earnings are seeing astronomical valuations and Warren Buffett has seemingly lost his touch.

Of course, interest rates were six times higher back then and many of today’s companies have an actual business model unlike the dot-com flameouts from the late-90s bubble.

But you know what investors didn’t have back then — people screaming that this is 1999 all over again!.

One of the only reasons people are calling this a tech bubble is because it’s easy to recall one from recent memory.

Regardless of tech stock performance from here, trying to time bubbles is easier said than done.

There’s a huge difference between predicting and profiting in the markets. It’s always the timing that gets you on these things.

Further Reading:
What is a Bubble?