Ben Carlson · Is the Vaccine Our One Giant Leap?

On May 25, 1961, President John F. Kennedy stood before Congress with an audacious goal, proclaiming, “this nation should commit itself to achieving the goal, before the decade is out, of landing a man on the moon and returning him safely to the earth.”

NASA analysts put those chances at 1 in 10 of ever happening.

When Kennedy made his declaration that the United States would go to the moon we didn’t have the technology, tools or equipment to make it happen. In fact, we didn’t even know how to fly to the moon or what course would be required to get there.

In his excellent book about this mission, One Giant Leap, Charles Fishman explains what we were up against:

On that day, May 25, 1961, when Kennedy asked Congress to send Americans to the Moon before the 1960s were over, NASA had no rockets to launch astronauts to the Moon, no computer portable enough to guide a spaceship to the Moon, no spacesuits to wear on the way, no spaceship to land astronauts on the surface (let alone a Moon car to let them drive around and explore), no network of tracking stations to talk to the astronauts en route. On the day of Kennedy’s speech, no human being had ever opened a hatch in space and gone outside; no two manned spaceships had ever been in space together or ever tried to rendezvous with each other. No one had any real idea what the surface of the Moon was like and what kind of landing craft it would support, because no craft of any kind had landed safely on the Moon and reported back. As Kennedy gave that speech, there was an argument—at MIT no less—about whether engineers could do the math required, could do the navigation required, and do it fast enough, to fly to the Moon and back.

Putting a human being on the moon may be our crowning achievement as a species to date.

Getting from a place in 1961 with no knowledge or tools about space travel to landing a man on the moon by 1969 required a herculean effort.

From 1964-1966, NASA had more staff and contractors than every company in the Fortune 500 save for General Motors. By 1966, there were 20,000 companies across the country in the supply chain for parts and assembly for the Apollo mission.

One of the most surprising after-effects of the sheer amount of brainpower and building required to make the moon landing a reality is how much innovation it sparked in the years ahead.

Historians of Silicon Valley and its origins skip briskly past Apollo and NASA, which seem to have operated in a parallel world without much connection to or impact on the wizards of Intel and Microsoft.

The space program in the 1960s did two things that helped lay the foundation of the digital revolution. First, NASA used integrated circuits—the first computer chips—in the computers that flew the Apollo command module and the Apollo lunar module. Except for the U.S. Air Force, NASA was the first significant customer for integrated circuits, and for years in the 1960s NASA was the largest customer for them, buying most of the chips made in the country. Microchips power the world now, of course, but in 1962 they were only three years old, and they were a brilliant if shaky bet. Even IBM decided against using them in the company’s computers in the early 1960s. NASA’s demand for integrated circuits, and its insistence on their near-flawless manufacture, helped create the world market for the chips and helped cut the price by 90 percent in five years.

What NASA did for semiconductor companies was teach them to make chips of near-perfect quality, to make them fast, in huge volumes, and to make them cheaper, faster, and better with each year. That’s the world we’ve all been benefiting from for the 50 years since.

NASA was the first organization of any kind—company or government agency—anywhere in the world to give computer chips responsibility for human life. If the chips could be depended on to fly astronauts safely to the Moon, they were probably good enough for computers that would run chemical plants or analyze advertising data.

NASA also brought the rest of the world into the era of “real-time computing,” a phrase that seems redundant to anyone who’s been using a computer since the late 1970s.

Only 12 people have ever walked the moon so Kennedy’s audacious goal didn’t necessarily usher in a new space age but it may have inadvertently ushered in a new digital age.

Is it possible the Covid-19 vaccine could have similar offshoots?

Look at the typical length of time it takes for vaccine development: 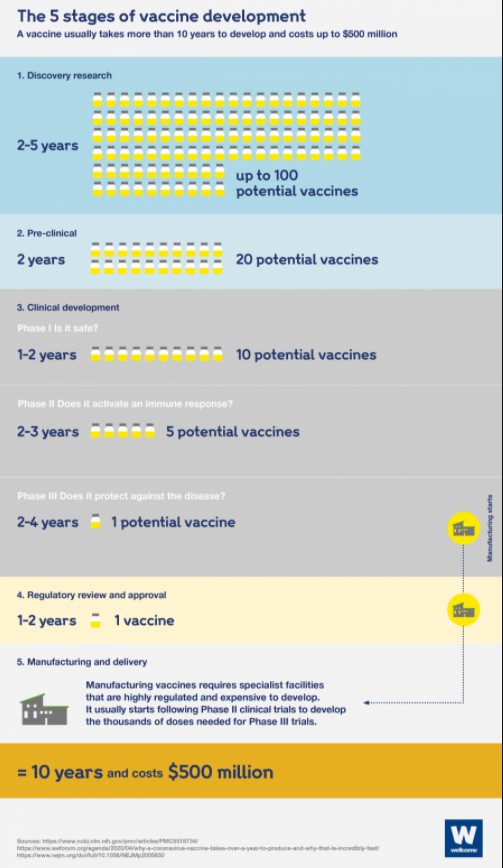 Both Pfizer and Moderna have likely found effective vaccines that could help put an end to the pandemic.

There are still some hurdles to overcome including authorization by the FDA and production/distribution and I suppose there’s always an outside chance of an I Am Legend scenario where the vaccine turns us all into blood-thirsty zombies. But it appears science is going to provide one of the biggest bailouts in history.

Ending the pandemic is reason enough for celebration when it gets here but you have to imagine there will be even more breakthroughs based on what’s been learned through this experience.

Will it be easier to fight potential pandemics in the future?

How many new and effective treatments will be spawned?

What have scientists around the globe learned from their hyper-speed collaboration?

Will we discover new ways of fighting diseases in the future?

The next few months will likely present many real challenges as the virus continues to spread. But there is light at the end of the tunnel and I’m hopeful 2020 will come to be looked at as a pivotal year in terms of advancing the science of disease prevention and vaccine research.

I can’t wait to read the Michael Lewis book about the scientific and healthcare breakthroughs we’ve made in 2020.

Further Reading:
The Glass is Half Full and Half Empty Right Now

1Here’s a good Freakonomics episode on why this compressed time horizon shouldn’t be all that concerning.