How has the NFL beaten the pandemic? I got this prediction from April half right:

There were a handful of college games this weekend but the Big 10 and Pac-12 are still on the sidelines. So I’m taking the win on that one.

But I have to eat the L for my NFL take. There was a full slate of games on Sunday and not a single coach or player tested positive heading into the opening weekend. Things actually began to feel normal again when I saw the Lions lose in heart-breaking fashion.

I was pessimistic about football because of the sheer number of people involved but also because this country’s response to the coronavirus has been so lacking. Steven Dubner provided a deep dive into how the NFL was able to put together a workable pandemic playbook on his Freakonomics podcast last week.

It helps the NFL Player’s Association has a disaster preparedness expert from the Pentagon rescue efforts on 9/11 as their chief medical officer. Dr. Thom Mayer told Dubner the players demanded daily tests for anyone entering a team’s facility but the results needed to be received in 24 hours or less to be effective.1

The season is just starting yet they’ve already conducted more than 200,000 Covid tests. They also instituted a comprehensive tracking and tracing system if and when there are positive tests to quarantine those who come in contact with someone who is ill.

I understand the NFL has the resources to pay for something like this. But do you know who else has nearly unlimited resources at its disposal? The U.S. government, who can literally print money with the push of a button.

I’m envious the response from the professional sporting leagues has been so much better and more coordinated than that of the rest of the country.

Was 2019 the best movie year in a really long time? My wife and I watched Jojo Rabbit this weekend (it’s streaming on HBO). The dark comedy about a 10-year-old boy living in Germany during WWII was nominated for best picture at the Oscars but I hadn’t heard much buzz about it. It was fantastic. One of the most creative movies I’ve seen in a long time.

I’ve been down on movies for a number of years now because so many new releases are sequels and re-makes but 2019 turned out to be one of the best years of the century for movies. In addition to Jojo, there was Parasite, Once Upon a Time in Hollywood, Joker, 1917, Ford vs. Ferrari, Knives Out, Ad Astra, Booksmart and Uncut Gems.

That’s a pretty good year. Now it sounds like we’ll be waiting quite some time for new movies because production came to a halt from the pandemic.

What if the fall isn’t as bad as some people think? Remember when the summer months were supposed to help tamper the spread of the virus because of warm weather? Yeah that didn’t really happen: 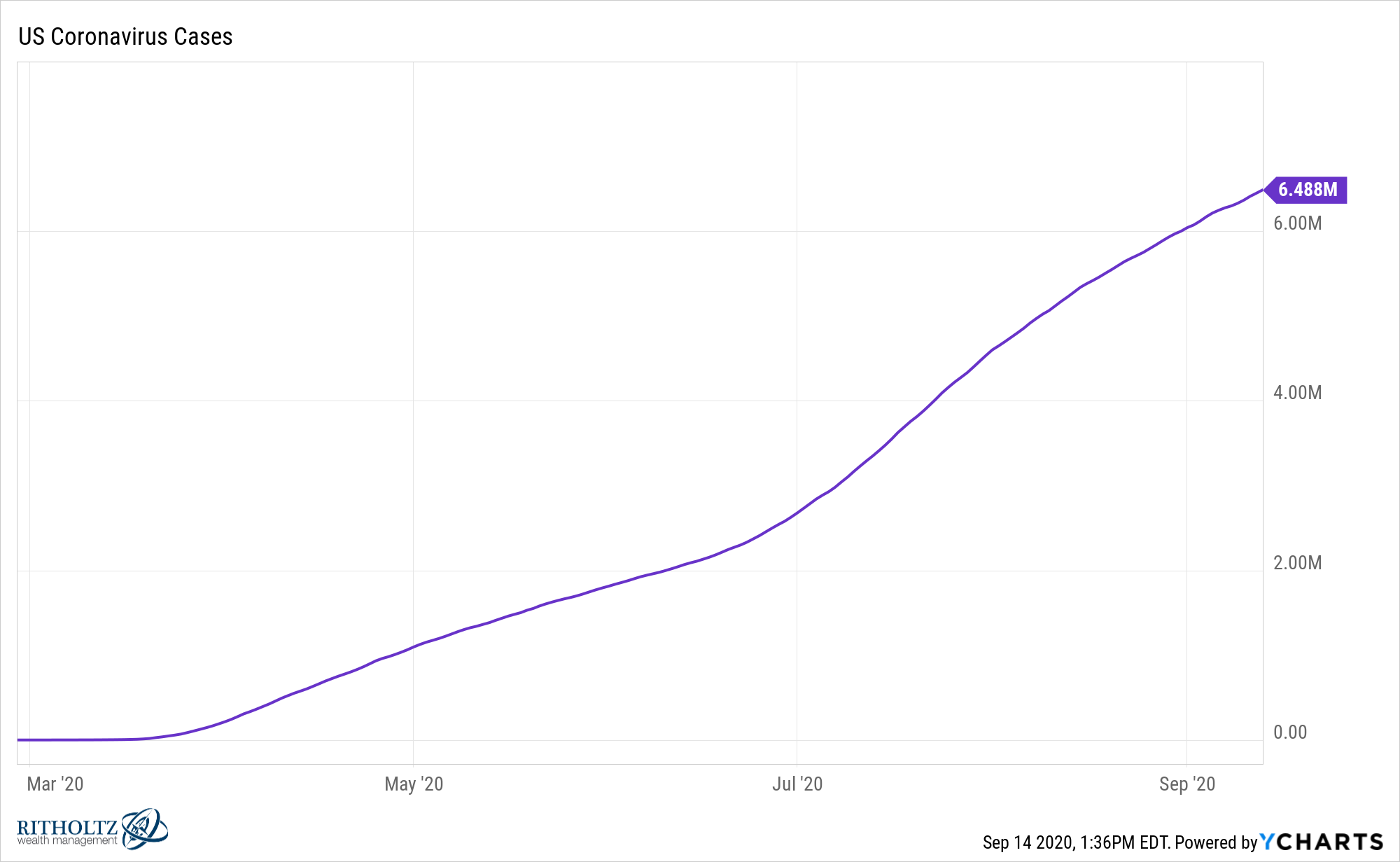 We’ve been hearing about a potential for a huge second wave coming this fall but I don’t know if that would count since we’ve never really seen the first wave crest.

But what if the fall goes better than people assume? The Wall Street Journal recently reported the regular flu has all but disappeared in many Southern Hemisphere countries:

From Argentina to South Africa to New Zealand, countries in the Southern Hemisphere are reporting far lower numbers of influenza and other seasonal respiratory viral infections this year. In some countries, the flu seems to have all but disappeared, a surprise silver lining that health experts attribute to measures to corral the coronavirus, like mask use and restrictions on air travel.

I’m guessing more people will get their flu shots than ever before. Maybe all of the safety measures will at least keep things in check as opposed to a further increase in cases.

Would it be too much to ask that the fall isn’t nearly as bad as many experts are predicting?

Isn’t the biggest contrarian strategy in the world right now being optimistic about the future? Things seem pretty bleak right now. The political situation in this country is a nightmare. No one can agree on anything. The pandemic has shone a light on many of the problems we’ve been dealing with for years now — racial inequality, wealth inequality and healthcare inequality.

It’s easy to take a cynical view of the world at the moment.

It almost feels like you’re going against the grain to have a positive outlook on the future.

In The End is Always Near, a book published in 2019, Dan Carlin presciently wrote an entire chapter on how a pandemic is a huge risk to our society. He looked at past pandemics through the lens of people living through these periods in the past, well before they had the technology or knowledge of infectious diseases to do much about them:

It may seem strange to suggest that high levels of illness might make human beings tougher, but the effect on a society of relatively regular and lethal epidemics and the mortality they cause certainly might have created a level of resilience that most of us today probably don’t possess. A husband and wife who have lost several of their young children to disease and have stoically pushed forward with their lives would probably seem tough and resilient to us. People around the world still do this, and we consider it one of the great tragedies of life to lose even a single offspring. But it has been only relatively recently in human history that this experience has become less than commonplace. Before the modern era, the number of people who lost multiple children to illness was astonishing. One wonders what effects this might have had on individuals and their society as a whole.

The Spanish Flu pandemic of 1918 killed as many as 50 million people worldwide yet people barely talked or wrote about it after the fact. Why? Because those people were used to dealing with disease and death in a way our modern society could never imagine.

Being pessimistic is an easier stance to occupy these days. It’s impossible to avoid negative stories since that’s the stuff that gets highlighted on the news and social media more than anything else.

But it’s worth at least considering the potential positive ramifications from this pandemic.

We’ve been through far worse as a species.

What if we come out of this stronger than before?

What if 2020 turns out to be a turning point in a positive way?

Maybe a bad year like 2020 will make us more resilient.

1The rest of us poor schmucks have to wait an average of 4-5 days for results.