Covid-19 has upended so many aspects of our life it would be impossible to avoid predicting how many of the changes we made will stick and which ones will immediately fade away in a post-pandemic world.

People are making predictions about the future of cities, where people work, education, restaurants, real estate and more. My conclusions on many of these topics rest squarely in the gray area because even small changes could have a huge impact so it’s hard to guess how behavior will evolve.

The one thing I remain certain of is our desire as a species to spend and consume. It’s amazing to think how quickly our consumption habits shifted from travel, dining out and experiences to stuff in such a short time.

RV sales are booming. People are remodeling their houses like crazy. Pool installations are happening at a breakneck pace. Bikes are impossible to find in many places.  Appliances are on backorder. It took me weeks to find a trampoline and months to find barbells for a home gym.

And while people have still been spending more than most would have imagined during a pandemic, many consumers have also repaired their balance sheets.

Tim Duy at Bloomberg broke down the numbers on this and they are staggering: 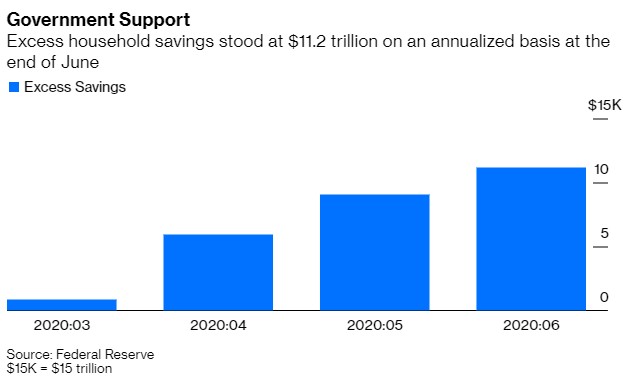 For some reason economists can’t help themselves by reporting their data using annualized numbers so Duy broke this down by the actual amounts too:

These are annualized numbers, though, so the actual total is $931 billion. That alone is a big cushion. How big? Suppose we spread the stock of excess savings out over 12 months. That provides households an additional $77.6 billon of monthly spending power, equivalent to 10.3% of the June wages and salaries. That’s real money.

But wait, there’s more. Consumer credit dropped roughly $100 billion from its peak, leaving room for households to borrow their way into additional spending if needed – or even if just desired.

Those two items alone total more than $1 trillion. Where is the money sitting? Total checkable deposits in the economy have surged by about $1.3 trillion dollars.

The CARES Act may go down as one of the most successful government programs in history. Not only did it help stave off a depression, but it provided many consumers with a cushion for the first time in a while.

If this thing drags on and we don’t get another fiscal stimulus bill, it’s possible people may have to begin depleting these savings.

But once we enter a post-pandemic world there’s a good chance most of this excess savings will find its way into the economy in a hurry.

People are going to want to travel again. Disney’s theme parks will be packed. Restaurants and bars will be filled. People will be spending money on stuff they’ve been cutting back on for months. If we can make it through this, however long it ends up taking, I think we could see a relief spending boom.

This money is going to be burning a hole in people’s pockets.

Michael and I discussed the potential for a spending boom, what this means for government debt going forward and some more thoughts on what happened to the middle class on this week’s podcast:

Further Reading:
How the U.S. Consumer Became the Most Resilient Force in the Economy