The S&P 500 has crushed all competition for some time now. Small cap stocks, value stocks, foreign stocks, emerging market stocks — none of them have been able to keep up with the mega-cap dominance of the S&P 500.

Here is the performance of the S&P 500 versus emerging market stocks since the start of 2007: 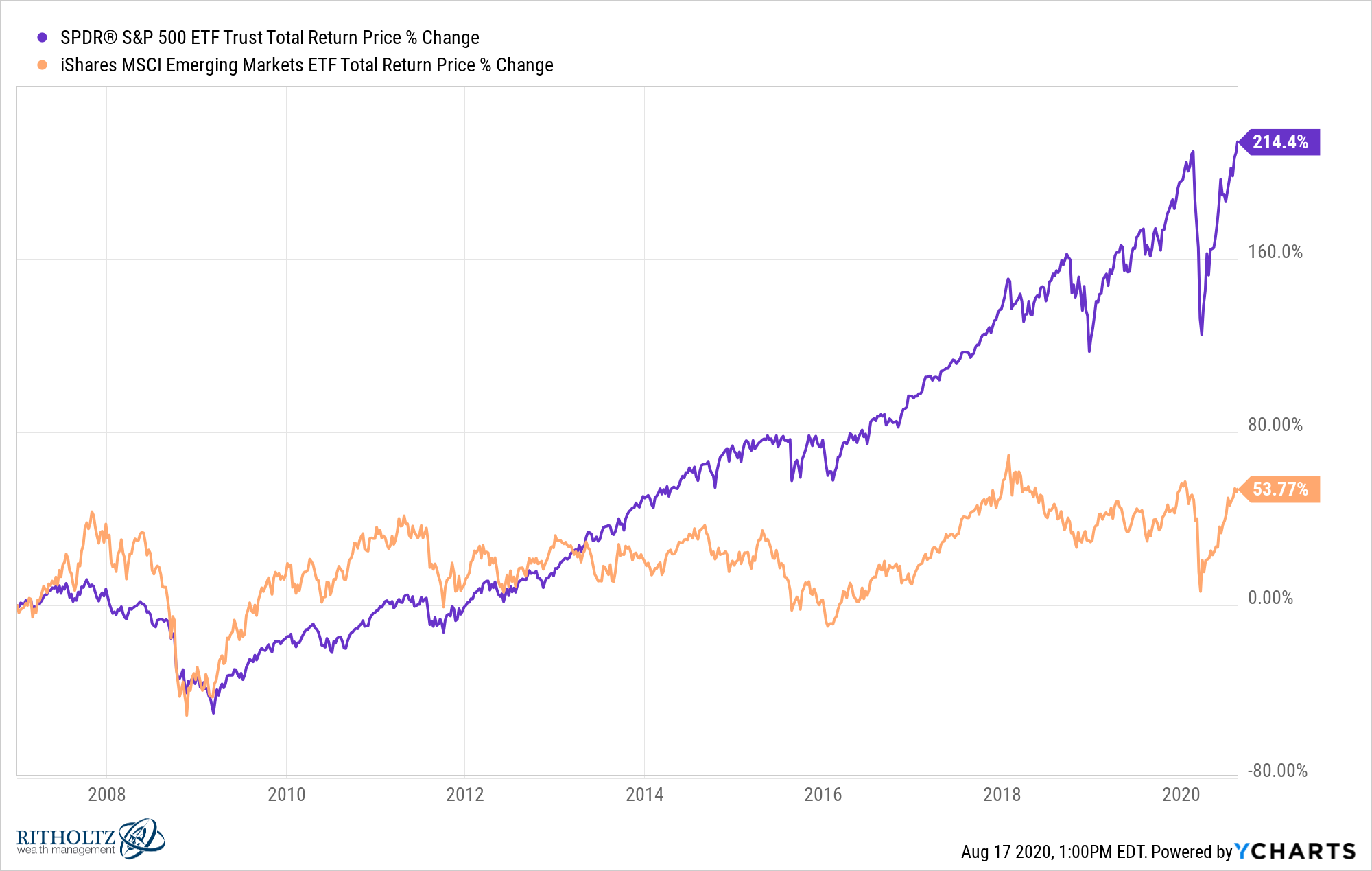 It’s not even close.

There are many reasons for this outperformance. The dollar has strengthened mightily since the Great Recession. Emerging markets also dominated the S&P for the majority of the first part of the 2000s.

Another reason many investors harp on is the sector differences between the United States and foreign stock markets. They say these differences help explain the large valuation gap between these markets:

The make-up of emerging market equities has changed dramatically in recent years. Blackrock sent me the sector changes in their iShares Emerging Markets ETF (EEM) since 2007: 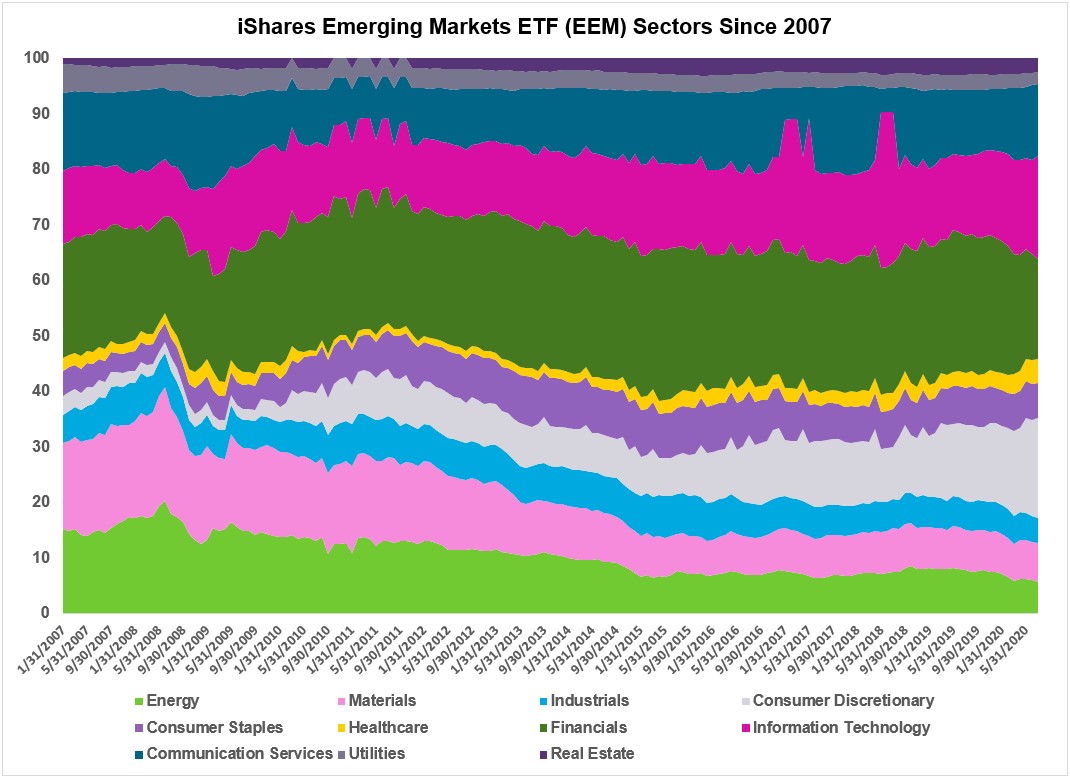 Here are some notable changes since the start of 2007:

Financials still have a large weighting but it’s a dwindling market share compared to the past. Energy and materials companies combined are now less than either of those categories were individually in 2007. And technology stocks now make up the largest sector in the fund.

Here are the sector comparisons versus the S&P 500 ETF (SPY) as of the end of July: 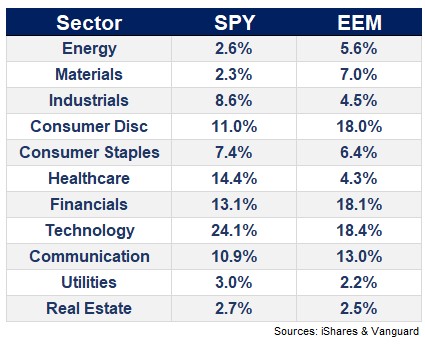 There are still differences here (mainly in healthcare) and of course the individual companies themselves are not the same but this looks a lot closer than things did in the past. And by far the biggest changes are in the tech and consumer sectors.

One of the main reasons the overall U.S. stock market has done so well is the monstrous performance of the giant tech stocks. Amazon, Apple, Microsoft, Facebook and Google currently make up around 23% of the S&P 500.

Emerging markets now have a similar tech concentration at the top. These are the top 10 holdings in EEM: 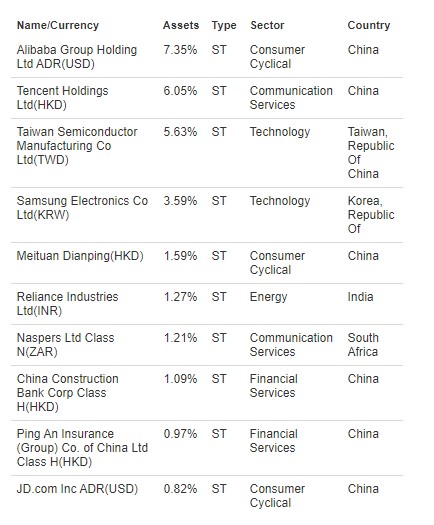 The sector labels can be confusing because the lines are now blurred between the consumer, communication and technology segments of the market but the top 4 holdings are all basically tech stocks in EM and they make up 23% of the MSCI Emerging Markets Index.1

In many ways, Alibaba, Tencent, Taiwan Semiconductor and Samsung are to emerging markets what Apple, Amazon, Microsoft, Facebook and Google are to the U.S.

Now, I’m not saying emerging market stocks deserve a similar multiple to the S&P 500. There are other factors at play here including rule of law, the maturity of the financial markets, trust in the financial system, the autonomy of corporations in various countries and how shareholders are treated by regulators and government officials.

But things have drastically changed over the years in emerging markets and many investors may not know this because their shares have lagged so badly.

It’s also worth noting the cyclical nature of the relationship between these markets over time:

These start and end dates are cherry-picked but they are the numbers nonetheless. And despite the vast differences in performance depending on the cycle, the returns in the overall period are nearly identical — 10.7% per year for the S&P 500 and 10.4% for the MSCI EM Index since 1988.

So maybe investors don’t care as much about the sectors as the other factors involved when investing in developing markets.

But emerging markets are starting to look more like the S&P 500 over time. Eventually, that should be a good thing for investors in these volatile markets.

Further Reading:
Which Investments Benefit From a Weaker Dollar?