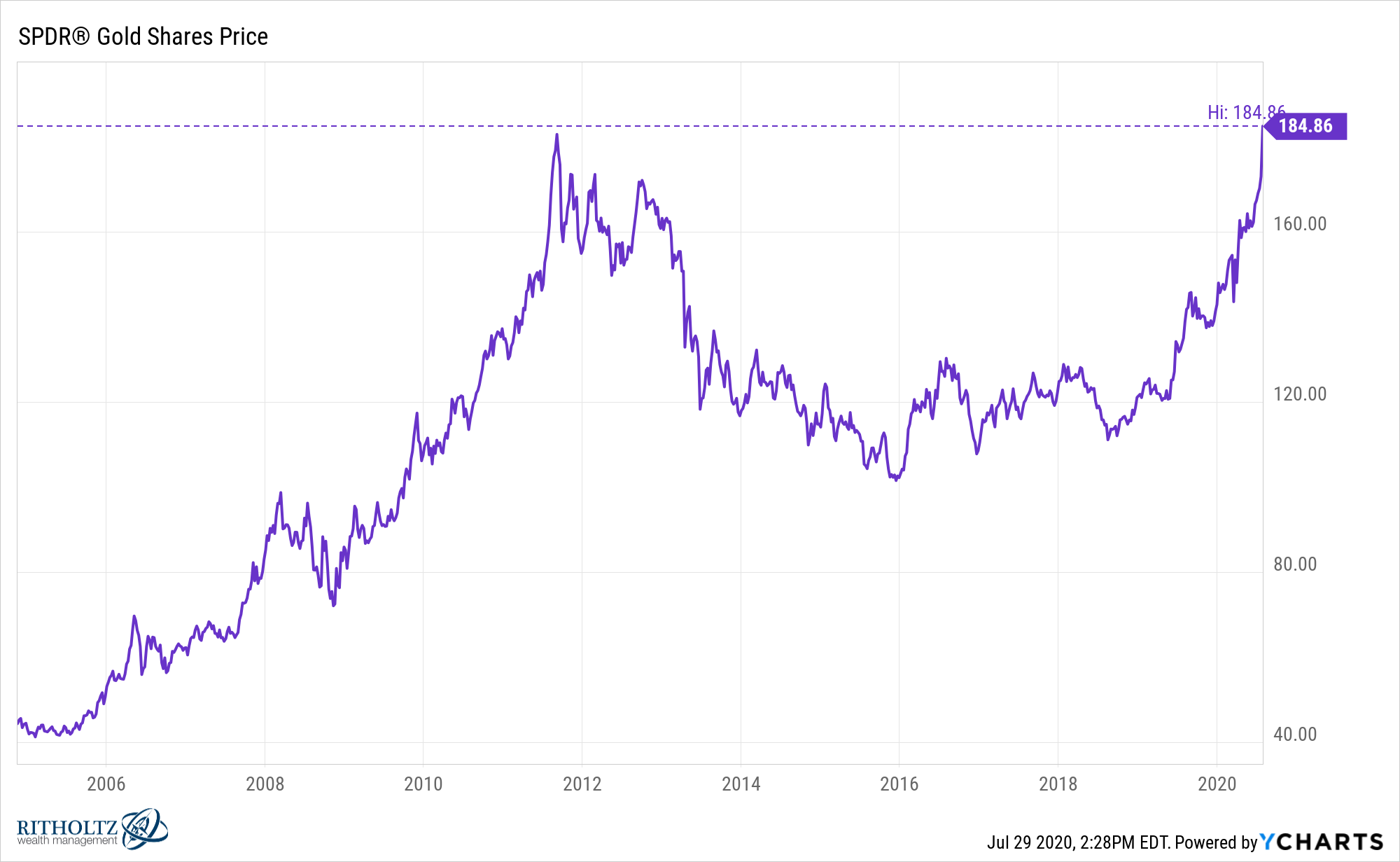 It has now eclipsed the previous peak last seen in the summer of 2011. Following that previous high it fell more than 45% before a strong rebound over the past couple of years. In 2020 alone, gold is now up around 30% and that’s following a gain of nearly 18% in 2019.

What’s the cause here other than a pandemic which threatens to change the world as we know it?

Real interest rates are falling. This makes the most intuitive sense. Gold doesn’t yield anything because it doesn’t produce any income or profits. But bond yields in developed countries across the globe aren’t much better than the 0% yield in gold:

Here is a chart showing the gold price versus the inverse of real interest rates since 2008: 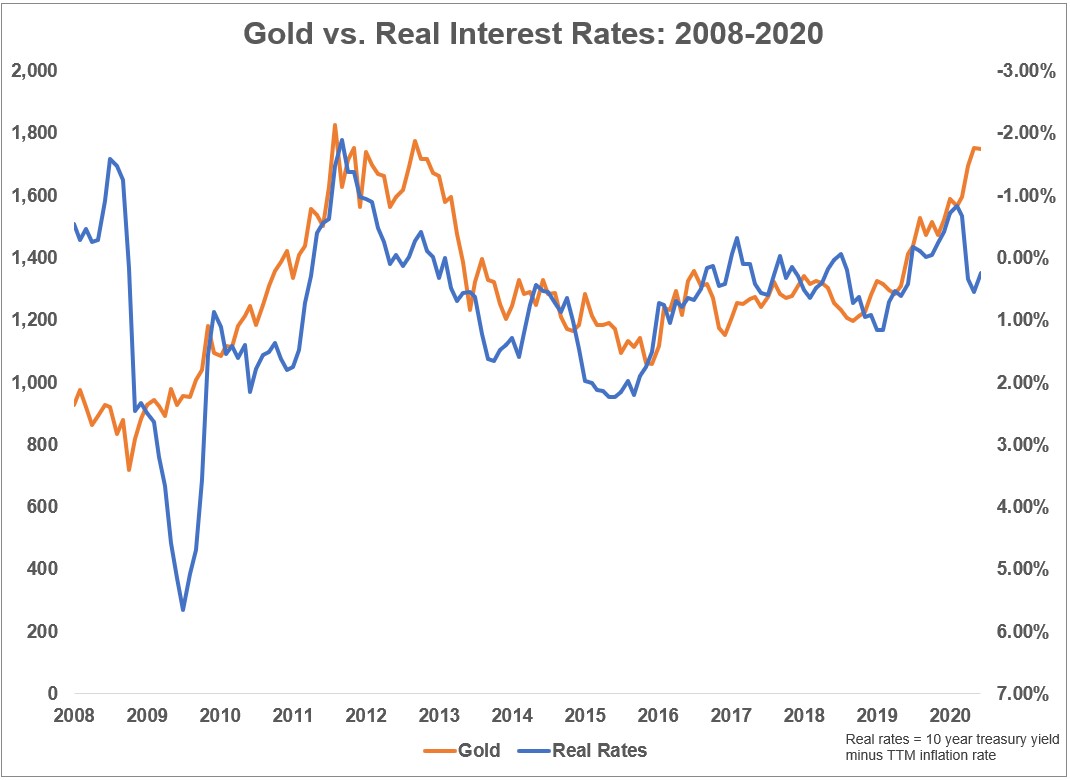 You can see as real interest rates have fallen, gold prices have risen and vice versa. Longer-term this relationship doesn’t look quite as strong but there is definitely still a relationship: 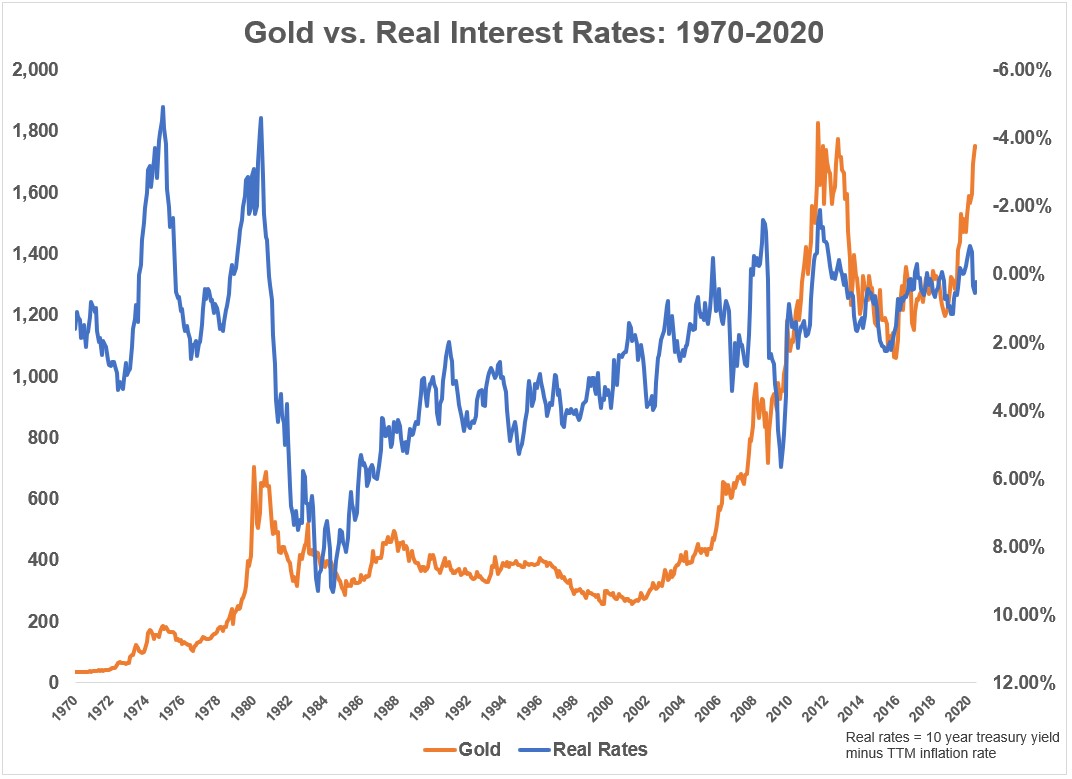 The dollar is falling. Gold is its own animal as an asset class — part commodity, part hedge, part speculation and part currency. Gold has been a store of value for thousands of years so it should come as no surprise that the yellow metal has a relationship with the U.S. dollar.

During the years when the dollar fell, gold’s average annual return was a gain of 17.6%. It was up 16 out of those 20 years.

Earlier this year the dollar was strong. Lately, it’s been weak.

Inflation remains low at the moment but people are beginning to worry about the possibility of higher inflation in the years ahead.

The relationship between gold and inflation is not as strong as many people believe considering it’s still technically below its inflation-adjusted peak from 1980.

But some people like to think gold is an inflation hedge and if enough buyers think that, does it really matter if it’s true or not?

This one is a little tougher to quantify but you can’t completely ignore the people who view gold as a hedge against everything (and good luck trying to change their mind on this).

Does it matter? It makes investors feel better about themselves when the price movements of an asset match their investment thesis. No one wants to admit they don’t know what’s causing an asset to move a certain way because we all like to have an illusion of control over the markets when investing.

It’s also important to understand these trends don’t have to continue. We don’t know real rates will continue to fall or stay low. We don’t know the future path of the U.S. dollar. And we can’t be sure all of this government spending is going to lead to inflation.

Having said that, if these trends stay in place you could make the case that gold will be a beneficiary.