During the oil boom of the late-1970s, many of the newly rich young men in Kuwait became interested in the stock market.

They witnessed a bear market in the late-1970s which was more or less thwarted by the government, who stepped in to become a big buyer. So when money moved into the market in 1980 it took off as people assumed they would be bailed out if anything went awry yet again. Investors took this as a sign that risk was off the table and an implicit government put would save them from losses.

The Kuwait market only featured a few dozen companies at the time so over-the-counter stocks that traded on an unofficial market became a hotbed for speculation.

Traffic in the city was so bad people began making trades from their car phones while stuck in gridlock.1 Everyone had nothing else to do during Ramadan so they ramped up their trading for entertainment purposes.

Their form of margin debt was using post-dated checks, which were accepted like cash. As stocks jumped 50% to 100% in a month people rushed to buy more with money they didn’t have yet by using a check with a future date scribbled in. As long as they sold the stock for a profit they could eventually come up with the money. At times these checks were written for amounts that were double or triple the current share price of the stocks they were betting on.

Fund of funds sprung up to invest in companies that invested in other companies. Only half the companies on the off-market exchange bothered publishing annual reports. It didn’t matter. The entire market grew from $5 billion to $100 billion by 1981.

According to John Train, Kuwaitis at the time had the following attitude when it came to Westerners who wagged their finger at this speculative boom: “You think of our market in terms of your own. But things are different here. Our government can’t permit a collapse. Why tie up your money in something dumb like Standard Oil of Indiana when here you can make 30 percent a year?”

A glut of oil, a new finance minister who wanted no part of propping up insanely high share prices and a number of insufficiently funded post-dated checks were the pinprick in the Kuwait stock market bubble. The worthless checks amounted to $90 billion.

The stock market tumbled hard. One of the most popular positions was down 98% from the peak.

Earlier this month, a front-page editorial in a Chinese state-owned newspaper urged citizens to buy stocks under the premise of a “healthy bull market.”

They listened. The market rose 6% the next day.

Stocks in China have been on fire lately, rising nearly 20% since the start of June: 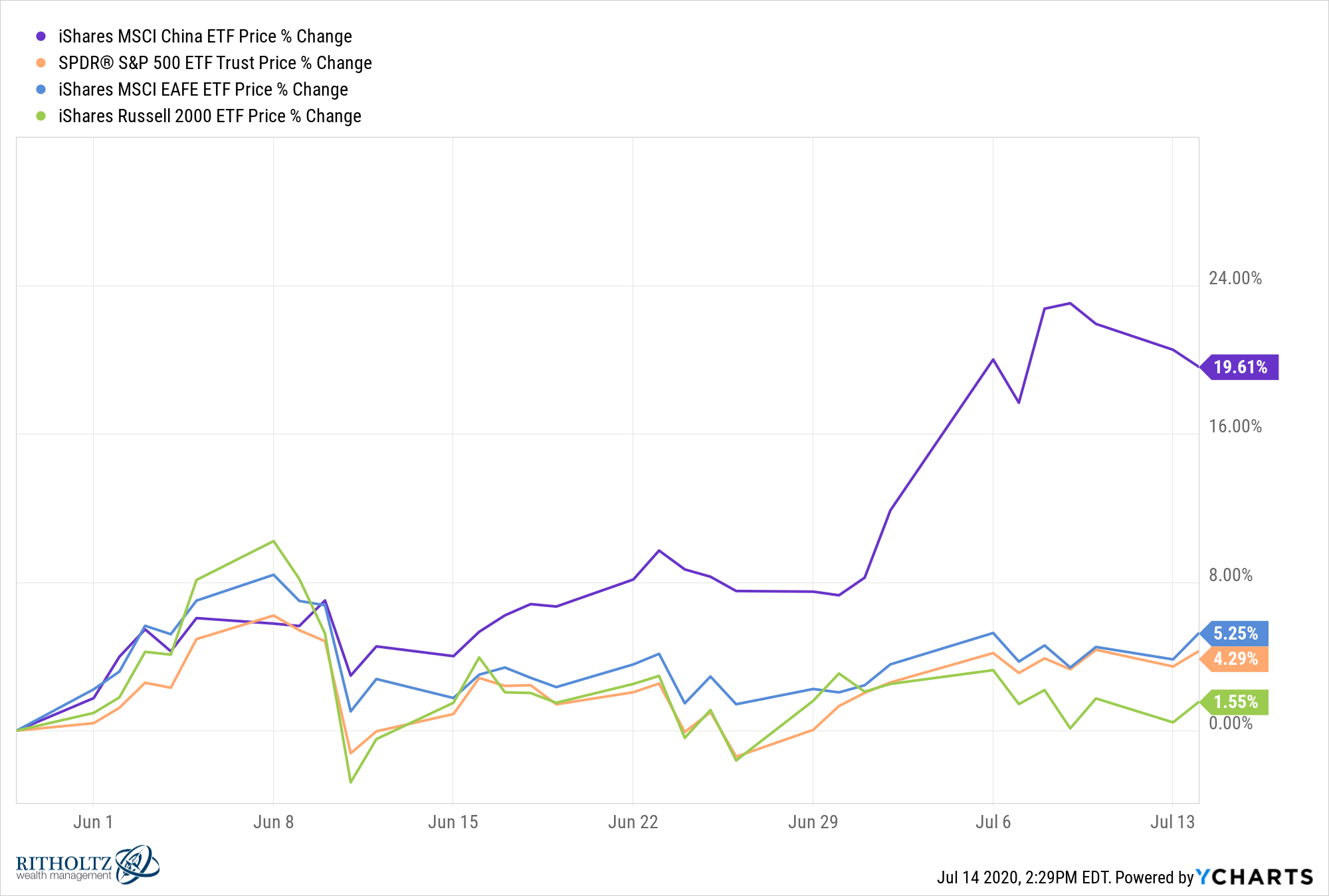 Over the course of the year, China is one of the best-performing markets in the world: 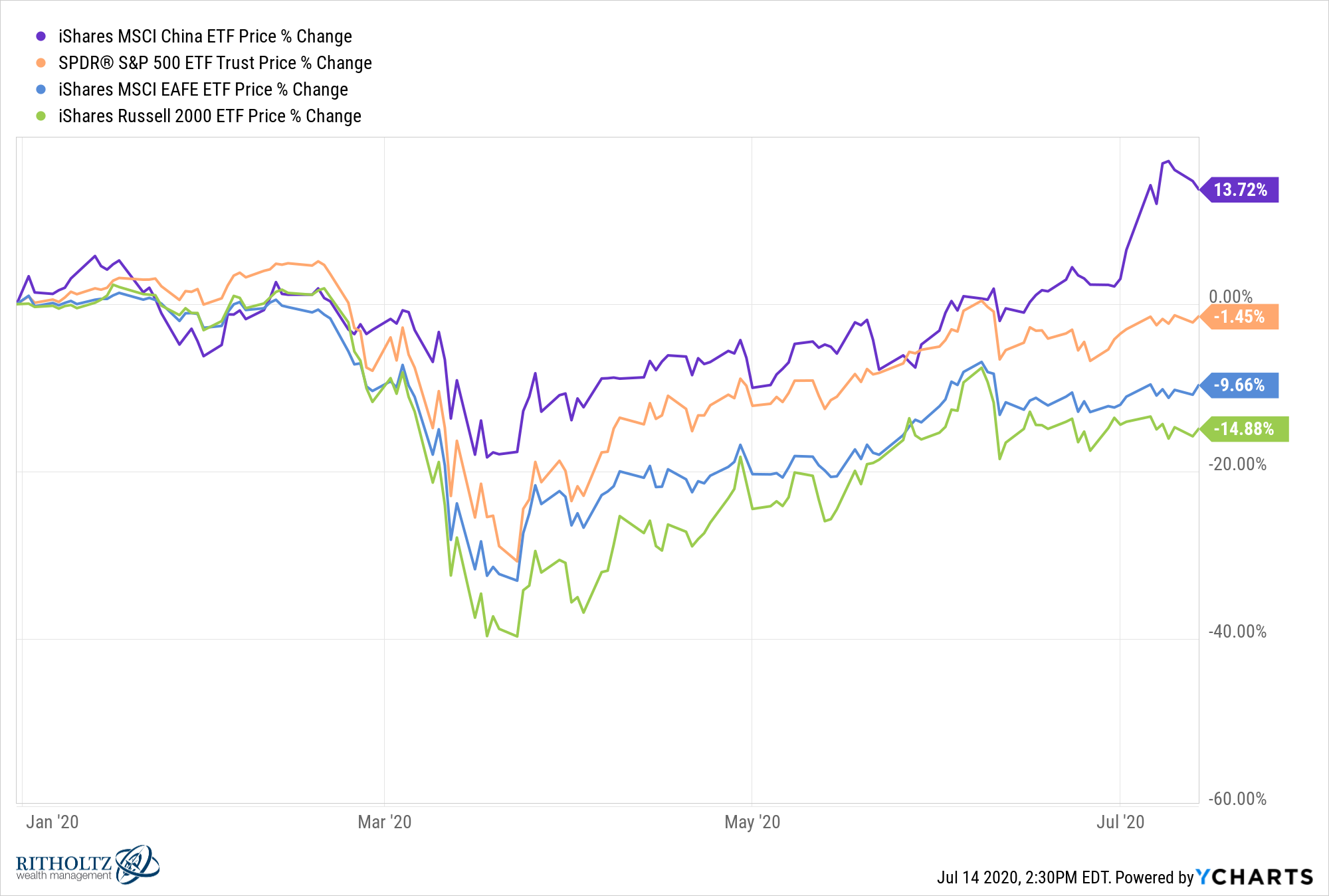 There are a number of potential reasons for this rise. It’s hard to believe the exact numbers coming out of China about the virus but they have certainly taken more extreme measures to stamp out Covid among their citizens.

Chinese stocks are also doing so much better than other markets because they didn’t fall nearly as much during the bear market: 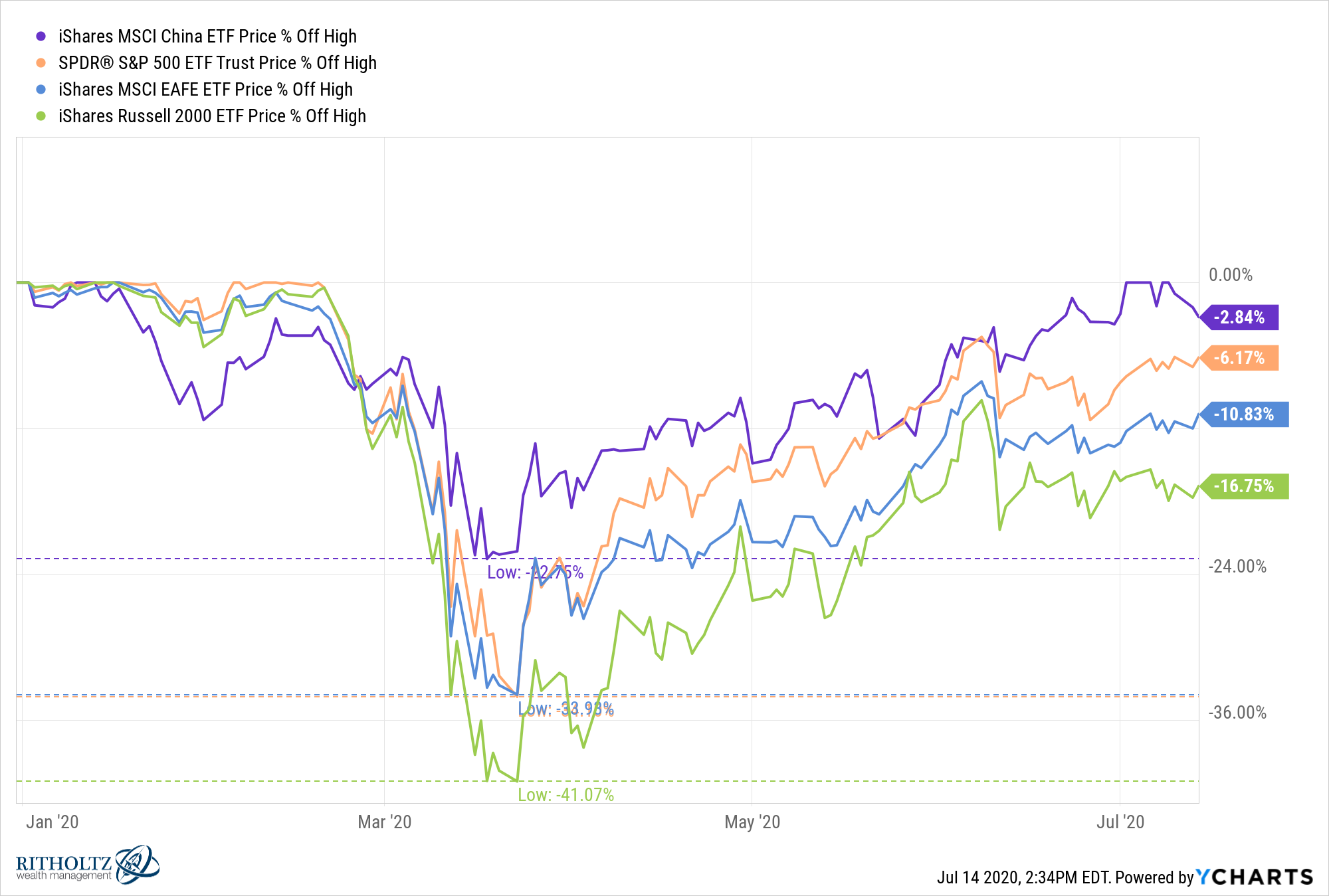 A similar dynamic played out in 2015 that eventually led to a nasty bear market.

China’s markets are larger and more mature than Kuwait’s in the 1980s but they are still more or less full of retail traders and investors. Sprinkle in a nudge or two from the higher-ups in the Chinese government and that’s a recipe for a bull market.

Starting bull markets is the easy part. Preventing bear markets is where the difficulty resides when trying to push markets around.

1Remember those car phones back in the day that came in those huge bags? The Robinhood of its day.